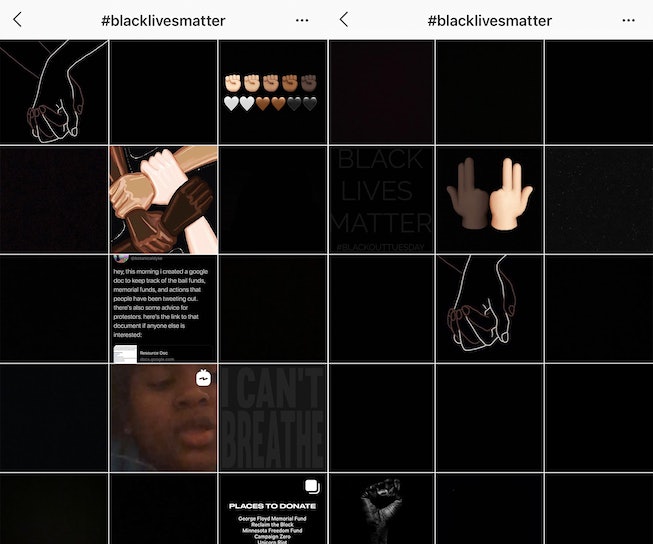 Blackout Tuesday, a movement that was meant to mourn and highlight the loss of the innumerable Black lives including George Floyd, Tony McDade, and Breonna Taylor, has spread across social media in the past few hours. Instagram users are posting images of a stark black square in observance of the day, and while well-intended, it’s quickly becoming a cause for confusion.

Here’s the problem. Those sharing the image are doing so under the #BlackLivesMatter and other BLM hashtags, which is an important tool to monitor and observe information about the protests, curfews and what’s really happening on the ground with the police. Instead, all that crucial information is now lost under a sea black backgrounds, which is obviously counterproductive to the cause. Without the hashtag, this burying of vital, real time information is still be drowned out on the average Instagram feed.

Along with the black squares, the initiative calls for people to disconnect from their social media accounts for the day and refrain from posting anything in observance. This brings on another problem in and of itself, because assuming social media silence, even for a day, can be ultimately damaging to the protestors relying on the information online. In the light of it all, several activists, influencers, and celebrities took to Twitter this morning to discourage people from clogging the feeds that serve as critical means of digital communication.

Kehlani was among the first to point out the problems in “execution” of the initiative. “I know that wasn’t the intention but now there’s fixing to be done,” she wrote on her Instagram stories. “People have to scroll for quite a while to find resources. People are outside and need the internet and each other as eyes, ears and aid. It’s deeper than getting off a post.”

Rapper Mykki Blanco also echoed similar sentiments and shared the importance of social media in highlighting the on-going instances of police brutality. “We need to be able to share recent arrests and bail out funds as well as new petitions and information ASAP in REAL TIME,” she wrote. “Citizens need to be able to document the injustices happening in real time if possible. The #blacklivesmatter hashtag if you search it today to find any info will have gone completely black. Using #blackoutday2020 is better but please don’t refrain from real time posting if something suspicious or unsettling has happened or is happening.”

Others on Twitter reflected on the unhelpful and “perfomative” nature of the posts. “Posting a black box on instagram has the same energy as tagging 10 friends on your story,” one user wrote. “My IG feed is full of black boxes but I’ve not seen about 70 % of those accounts post a single helpful image or useful resource on their stories, purely performative.” Meanwhile, Sharine Taylor, a music and culture writer, talked about the glaring need to address issues in digital organizing. “We need critical dialogue on digital organizing by people who know how to navigate the space,” she said. “Whatever this is, ain’t it. sorry but we need to demand more from ourselves and from allies. This literally reverses all of the digital activism done to date. It’s lazy.”

Black Lives Matter activist Kenidra Woods also pleaded with users on Twitter to not be a part of the black out movement. “We know that it’s not intended to harm but to be frank, this essentially does harm the message,” she explained. “We use hashtags to keep people updated. PLS stop using the hashtag for black images!!”

Spearheaded by music executives Jamila Thomas and Brianna Agyemang, Blackout Tuesday was intended to suspend normal businesses operations on June 2nd, in the wake up of the on-going protests raging across the country. Many including the likes of Billie Eilish, Quincy Jones and Rolling Stone were in compliance along with brands who all said they’d not post anything to observe the day. But ultimately, as many activists have pointed out, it doesn’t seem to serve the purpose. Not only does it disrupt the chain of information integral to keeping people in the know but also takes away from important Black voices at a critical time of change.

NEXT UP
Entertainment
Meet Andreas Metaxa, The Man Behind The Miami Jet-Setting Memes Of Supersnake
Fashion
Meet The Depop Seller Making Belts Out of Tiny Bonne Maman Jars
Culture
Senators Quoted Taylor Swift During Ticketmaster’s Hearing
Culture
On The List (With Melissa Rich): How To Throw The Ultimate Apartment Party
Style + Culture, delivered straight to your inbox.