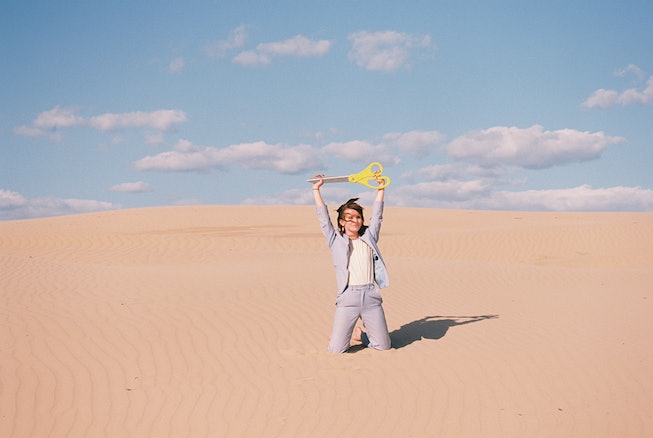 At the start of The Ember Knight Show, Ember Knight, in a pale blue suit and Twiggy eyeliner, sits in a bright orange room in front of a shamrock, aqua, and fuchsia fireplace surrounded by bubbles. They read a newspaper called “Good News” and ask, in a singsong voice, if you’ve ever gotten mad. Knight’s calm confidence and vulnerability brings to mind Mr. Rogers; something about the knowing way that they ask makes you want to lean in and scream “Yes!”

The Ember Knight Show, which Knight created with Bobby McCoy and Mikey Santos, has released three shorts on Adult Swim and three full episodes on YouTube — the third of which, “Getting Mad,” co-starring Sloppy Jane’s Haley Dahl and featuring animation by Clara Murray, premieres Tuesday on YouTube.

The short episodes focus on a theme, like telling the truth or listening, while the Adult Swim shorts take on equally fraught topics like shaking hands or getting dressed. Throughout the episodes, the viewer enters Knight’s brain, a world of claymation, bright colors and ambient bell-like tones, but also of stunts, like driving a toy car down the 101 naked or being fed a cockroach. The result is a beautifully chaotic and very fun journey into vulnerability, and ultimately, some kind of lesson about being nicer to each other and ourselves. It’s not unlike a visual meditation or a psychoactive hallucination, leaving you feeling both intrigued and blissed out.

NYLON spoke with Knight about the feeling of spiraling, the show’s PBS-like, dreamy DIY aesthetic, and how to create a world where we’re more gentle to ourselves.

Tell me a little bit about how and why you created this show?

Me and my absolute best friends make the videos that we want to exist. We don’t make things that we think are necessarily going to do well. There’s so little you can control in this world, but the one thing I can do is carve out a plot of completely honest media and make videos and music that I think is helpful to other people like me. The Ember Knight Show was born out of me and director Bobby McCoy and cinematographer Mikey Santos. It’s a positive message for jaded people like us who wouldn’t normally accept a positive message, because normally stuff that is friendly and nice and about friendship is toothless and untrustworthy, and isn’t what it’s like to be a human being who suffers and is sad.

We wanted to make something about how the sh*t they told you to do when you were a kid is not so simple to pull off and increasingly harder as you grow up. We created a character that’s a fictionalized character of me that demonstrates that, who comes from a classic, charming environment of a simple message and heads out into the real world or the world of their troubled psyche and is like, “Oh this isn't so simple, but it is still good to try.” Even if you acknowledge that things are really hard, you don't want to make media that lands on the message that irony is the answer or you should just give up.

“Normally stuff that is friendly and nice and about friendship is toothless and untrustworthy, and isn’t what it’s like to be a human being who suffers and is sad.”

The tone of this show can be chaotic and a little unhinged — but it’s also really sweet and I love that combination. Can you talk about the tone?

We got really lucky in terms of the combo of creators. We are big fans of skate culture; we’re big fans of Jackass, but we are also really sweet people, so we just wanted to land on a tone that is really fun the whole time. The moment you think it’s locked into one type of thing, it surprises you in a new way. It’s gritty, it’s DIY, it’s scrappy. We create everything ourselves. We built the sets ourselves. For this episode, we drove out to the sand dunes and got stuck in the sand dunes and we just hauled all our gear out there. We do it ourselves and the tone comes out of that ruthlessness and that commitment.

The aesthetic of this show is wonderful and bizarre. You call it ‘90s Nickelodeon, which I love. Can you talk more about that?

I think we make all of our choices based on what we like, what delights us, what we think is funny, and also what feels true. In the bug scene for example, in this episode, Bobby wrote in that I was going to eat a dead bug and actually eat it and then puke and the day of, I was like, I don’t want there to be a dead animal in this video. I don’t think that’s really the vibe. So my brother Eamon went to Petco and got some live cockroaches and when he brought them back, we kind of fell in love with the cockroaches. We thought we were going to be grossed out, but we sympathized with them and wanted to treat them well. I asked everyone to refer to them as Susan and Pierre on set and we treated them as co-stars and had a really sweet time working with them.

We got a whole behind-the-scenes video of taking them out of the park and thanking them for their work. Every moment of the show is done with this playful commitment to this imaginary world and that’s the message of the show, too. Over and and over saying, “I hear that things are messed up and see that things are messed up, but I’m going to recommit to what I want my version of that reality to be. I’m going to push that as hard as I humanely can because I think it’s going to be useful to someone else.”

It’s not exactly self-help, but has that “We’re all in this together,” Mr. Rogers energy. But unlike Mr. Rogers, the adult psyche can be so brutal. In this episode, there’s a lot of spiraling that happens. Why was that something you wanted to explore?

There were a lot of drafts of this script, but I knew it had to be an internal shame spiral because I know I build “f*ck you” cities around people that I’m mad at, but at the end of the day, every one of those cities is based on an existing insecurity or fear that doesn’t really have anything to do with them. That’s something that’s hard to talk about I think and I hadn’t seen it articulated anywhere else. We pulled a lot form an early Droopy Dog cartoon where no matter what, this hound, who’s a criminal, runs all over the world and is trying to escape from Detective Droopy Dog. No matter where he goes, Droopy Dog is there — that’s very much what it’s like to be in my head when I'm spiraling over somebody or a situation. I just end up living the same conversation and getting triggered and I'm no longer living in the world or interacting with them and it gets so far from reality. So I’m trying to learn when I am doing that to stop and check in with the other person and be like, “Is this true what's going on in my head, or is it not really the reality between us?”

It's so hard to do and when we were writing it, I didn’t want either of the characters to ultimately be wrong. So what is the story if there’s no good or evil — if there's just the hell of your own bullsh*t or the heaven of friendship?

Haley Dahl of Sloppy Jane is in this episode. How did that come about?

Haley and I have been friends for years. We went to high school together and I’ve wanted to have her in the show for a long time and it was the perfect part because she and I both suffer deeply from “fuck you cities” and have talked about them for years. It was the fight time to incorporate her in the show. She does a great job. We made a feature film in 2017 called King of LA and she is in that as herself. I like to cast her as herself. She is wonderful at that.

How do you want people to feel when they watch this? What do you want them to take from it?

After making the Adult Swim smalls, I know the world is full of people who don’t think like me who will be like “What the hell were they smoking?” and that’s fine, but there’s also thousands, possibly millions of people who do need to see something like this, who this does resonate for. I’m not worrying about whether it’s for everyone. I’m concerned for and love and want to nurture a relationship with other people like us who are young, who are confused, who have a sense that things are wrong, but don’t know how to articulate it because the media that is spoon fed to us is such a tired, condescending format. I hope when people watch this they feel validated and just go, “Yes, that’s what I’ve been trying to say, thank you for helping me say that.”