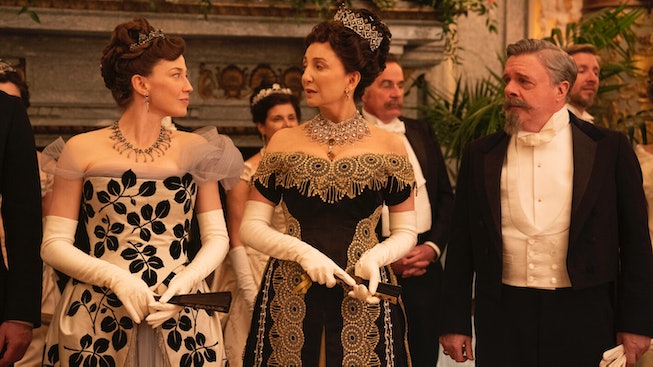 Not every television show set in New York City initiates cultural change. Some silently pass through the climate and some miss the mark so obviously that they unintentionally create it. The ones that do it right play to certain elements that are eternal to the city — ambition, society, upward mobility, and fashion (the physical manifestation of it all) and always hit at the perfect moment. The term “vibe shift” has entered the zeitgeist and represents this edifying change. Many anticipated such an effect at the beginning of this year with the premiere of what we perceived to be a continuation of the show with the most tremendous influence of all, Sex and the City. As evidenced by the new title, And Just Like That would not be what Sex and the City was.

While its influence is undeniable, instead of creating the “vibe,” they responded to it: overcorrecting criticisms of the first series, pinpointing notes of the pandemic, and inserting heavy-handed moments of “woke” culture; all things that move far too quickly to immortalize and feel current. It ultimately fell into the aforementioned “unintentional'' category. And just like that, “wokeness” felt dead. Enter The Gilded Age, premiering just over a week before And Just Like That’s first season ended and also starring Cynthia Nixon, cinched and ready to pick up the pieces, primed for the current moment of New York.

From the start, The Gilded Age’s aesthetic lands. Set in 1882, Manhattan’s 61st Street, though actually in Newport, Rhode Island, feels buzzing and even more alive than many shows filmed on location. There’s the broad, irrefutable beauty of the homes… and then there’s the costumes. No one would deny the near-perfect execution of the fashion in And Just Like That, however, the costuming in The Gilded Age contributes to one crucial element of the show: fun. We get corsets and Christine Baranski telling a seamstress to make her bustle fuller; we get Christine Baranski in general. She functions as a Samantha-like entity (Kim Cattrall’s legendary and sorely-missed Sex and the City character) with witty one-liners and a no bullsh*t attitude, giving the show a far closer resemblance to the original Michael Patrick King creation than its predecessor. The parties are fabulous and go til dawn, a crucial component in New York canon. The dinners are lavish with regimented order, and even more importantly, not everyone is invited.

The Gilded Age imparts seemingly old-fashioned rules and etiquette that while not in the forefront, are, in truth, just as significant today. Manners become a weapon. Societal rules and nonadmission create tension and dishy drama. Politeness begets control of oneself and therefore of the evident situation. Even when sneaking out of Mrs. Astor’s servants’ quarters, covered in feathers, Mrs. Russell (Carrie Coon) maintains her stature. After watching our beloved characters flounder in And Just Like That, failing to recognize and abide by society’s “new” framework, it’s refreshing to witness pure decorum. Mrs. Russell’s campaign to enter society provides an underdog narrative easy to cleave to. Her efforts are civilized and genteel, yet as fun to watch as Blair Waldorf’s antics in the original Gossip Girl.

Where some New York shows have declined discussing class out of fear of getting it wrong or failing to uphold political correctness, The Gilded Age dives head on. Not since 2007’s Gossip Girl has there been a show displaying such elitism and opulent wealth, unapologetically, as plot points. Its HBO Max reboot, unfortunately, skirts the issue. The women on And Just Like That maintain a certain level of wealth and inhabit a specific sect of uptown society, though one of them does live in an outer borough. None of this is discussed, though it was in its original series. A show about New York cannot ignore the desire for upward mobility. The Gilded Age openly discusses the differences between new and old money, who is worthy of inclusion based on name alone, and who must be shunned to maintain order. It mirrors today’s maneuverability, with the mask of dignity and sophistication as the vehicle as opposed to today’s fast-fame influencer culture. The show demonstrates a different way to rise in society, with a focus on demeanor, decency, and self-composure being the objective. It’s knowing the rules and playing by them, even if your opponent is oblivious to them.

The Gilded Age epitomizes current New York in a playful, campy way, reigniting relevance and inciting a revival after a period of doubt and uncertainty. Its excitement for the future, evidenced in Mr. Edison’s lighting of the New York Times building, illustrates our current climate of rebirth and renewal. In 2022 New York, the shift has occurred. Nightlife is restored and moves further uptown to venues reminiscent of glamour. Spots like Bemelmans at The Carlyle draw a downtown crowd for martinis and piano music in a classic location. Ultimately, The Gilded Age did what And Just Like That couldn’t. It captured the essence of New York and altered the vibe. As both are renewed for second seasons, we must follow Mrs. Russell’s wisdom and “go where history takes us.”