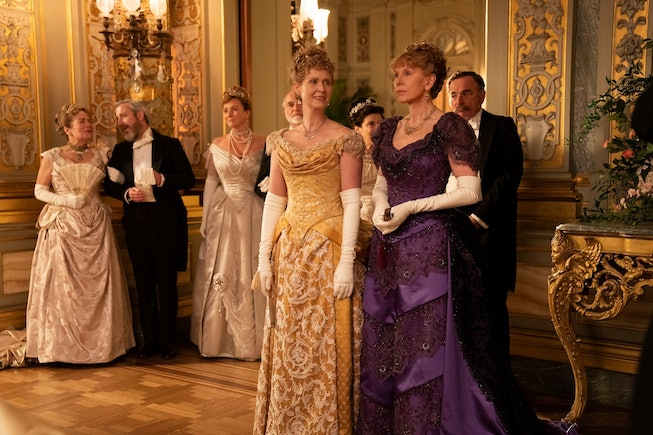 Lovers of frothy period dramas with high stakes and beautiful gowns are in for a treat — the hard-working people over at HBO are delivering the goods with the forthcoming series The Gilded Age. While the drama bills itself as fiction, it’s set during America’s very real Gilded Age in the late 19th century — expect lots of decadence from the era’s one-percenters and some historically accurate takes on America’s move into the modern age. See everything you need to know about The Gilded Age, below.

It’s from the brilliant minds that brought you Downton Abbey.

Writer and producer Julian Fellowes knows how to whip up a tantalizing period drama, especially with credits including Downton Abbey. Back in 2018, there was some buzz about Fellowes’ Downton follow-up, which was originally developed for NBC, only to end up at HBO a year later. Fellowes’ former Downton partner, Gareth Neame, will also executive produce.

The Gilded Age comes with a stacked cast.

HBO rounded up Hollywood’s finest to pretend to run around 19th century New York high society. Cynthia Nixon and Christine Baranski lead the charge, along with Carrie Coon and Morgan Spector. Denée Benton will also star alongside Louisa Jacobson, who also happens to be Meryl Streep’s youngest daughter. (I’m thinking of a word that starts with “N” and ends with “ism,” but I just can’t seem to put my finger on it...)

It follows New York high society — and those desperate to break into it.

Per Entertainment Weekly, The Gilded Age focuses on sisters and old New York aristocracy Ada Brook (Nixon) and Agnes van Rhijn (Baranski). Ada is unmarried, Agnes is widowed, and their niece Marian (Jacobson) has no money to her name. The sisters take Marian under their wing, and she soon meets her new fabulously wealthy new neighbors, Bertha and George Russell, whose flashy attempts to break into moneyed society are met with disdain. Scandal! Stakes! Opulence! New money! Sounds very American, indeed.

Much like Downton, the “staff” of The Gilded Age will also play an integral role. “When we recreate that period, we're as interested in the people working below the stairs as we are in the people above it,” said Fellows. “It was an integral part of that life, and I don't really see how you can tell those stories anymore and not define the servant characters because they were all there. They were all thinking and feeling and having opinions about their employers and plans for their own lives."

The trailer sets the stage for drama. And beautiful gowns!

Carriages, ballgowns, people talking disdainfully about new money — The Gilded Age’s first trailer immediately lets you know that these one-percenters mean business. Baranski seems to be the stern sister to Nixon’s more sweet-natured Ada. She doesn’t care for the newly wealthy New Yorkers who she perceives to be ruining society, and she’s going to let them know!

The Gilded Age debuts January 24 on HBO, and will also stream on HBO Max.