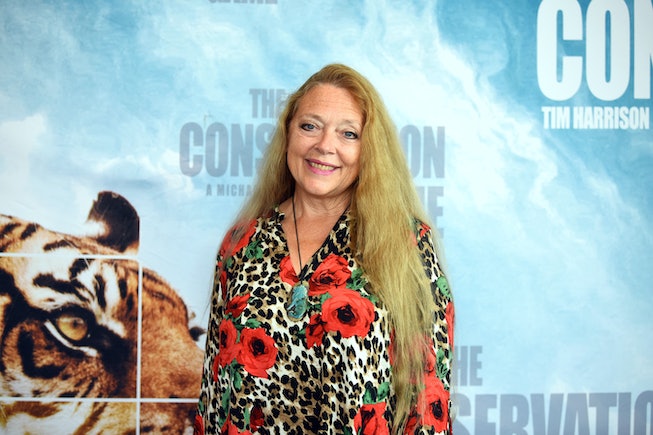 March 2020 is an era that many of us would soon rather forget. Tiger King could not have come at a better time, when the world — cooped up inside for what we thought was “a couple of weeks” — was primed for some absurdist escapism. The elements of the show were so ridiculously addicting, it’s as if it was spit out by machine learning to create the perfect reality TV show: big guns, bigger animals, a murder accusation, polyamory, Florida.

Now, Tiger King is going to be further immortalized in Joe vs. Carole, a series for Peacock, because for all the talent in Hollywood, nobody wants to write anything original and instead wants to adapt, readapt, reboot, and “reimagine” characters and concepts that we could have said goodbye to years ago.

Anyway, the first trailer for Joe vs. Carole was released on Thursday, showing Kate McKinnon as Carole Baskin and John Cameron Mitchell and Joe Exotic. For a series that was already insane, the trailer looks like it punches up the antics even more. McKinnon is oddly perfect as Baskin, always clad in leopard and riding her cruiser through the sanctuary. And as an added treat: Kyle McLaughlin plays her husband.

The series is actually more based on the Wondery podcast “Joe Exotic: Tiger King,” which aired just before the Netflix documentary and goes more into depth, particularly focusing on the dynamic between Exotic and Baskin. For the uninitiated: Basically, Baskin is trying to shut down Exotic’s tiger “sanctuary,” which she believes is a cash grab, while Exotic tries to expose Baskin’s own checkered past, where she may or may not have been linked to a murder.

“I hope that when people watch Joe vs. Carole just maybe they’ll see these people that they thought they knew in a brand-new way,” showrunner Etan Frankel said in a statement. “We knew it would take two extraordinary actors to portray these larger-than-life people as the complex, three-dimensional individuals that they are. Mitchell is one of the most gifted and thoughtful actors I’ve ever worked with. He cares so deeply about the work, and his performance is breathtaking. And McKinnon is simply remarkable. She is able to make us double over with laughter one moment and then break our hearts the next. It was an absolute thrill to watch these two exceptional actors morph into these roles.”

All eight episodes will debut on the Peacock streaming service on March 3. In the meantime, here’s the official trailer: