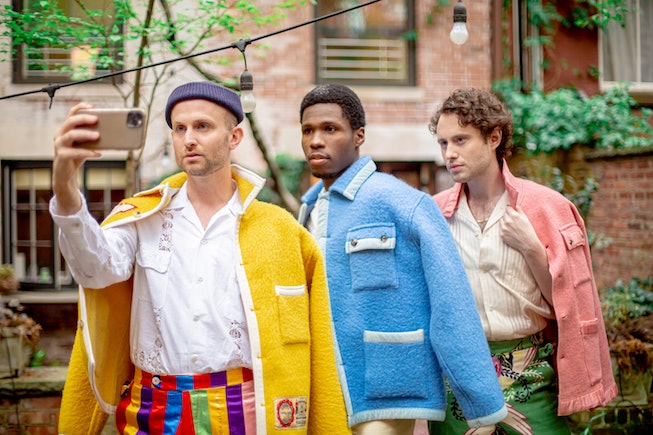 If you ask Michael Breslin, Patrick Foley, and director Rory Pelsue, The Real Housewives franchise is masterpiece cinema, as worthy of study as any classic Hollywood gem or art house darling. When their gonzo queer live-streamed theatrical production Circle Jerk became a hit last October, it introduced the world to the multimedia and theatre company Fake Friends, comprising Breslin, Foley, Pelsue, and dramaturgs Ariel Sibert and Cat Rodríguez. Deeply enmeshed in the language of the Extremely Online as well as the lexicon of Bertolt Brecht and absurdist theatre innovator Charles Ludlam, Fake Friends’ piercingly satirical sensibility was both riotously entertaining, thrillingly tasteless, and acidicly bellicose, unraveling whiteness, patriarchy, and power in striking ways.

Now the team is reviving and revamping their Housewives-inspired show This American Wife, using the wives to examine the relationship between the internet and real life, the crumbling American Dream, and the intoxicating and corrosive desire for fame that’s been heavily democratized in the last two decades — thanks in part to the reality television phenomenon that started on Bravo in 2006 with The Real Housewives of Orange County.

But just because reality TV is the starting point for the Housewives doesn’t mean that cinema isn’t inherently tied up in that form and visual aesthetic. To prepare for this new version of the show (which was originally staged at Yale in 2017, and then transferred to New York Theatre Workshop), which also adds new cast member Jakeem Dante Powell, the team has been watching more movies for research, this time around solidifying the connection between cinema and reality TV.

“It's fun to watch The Real Housewives and see the cameraman and the editors referencing cinema in really trashy and hilarious ways, as it's sort of like a commentary on how stupid and at the same time profound the form of reality TV is,” Breslin says.

The show, which uses the Housewives as a vessel through which to explore identity, desire, class, and race, will be live-streamed from a mansion on Long Island and will look fairly different from Circle Jerk, opening up the frame in significant ways. Breslin continues, “Circle Jerk was deliberately two-dimensional; it was about the flatness of theater and the flatness of the iPhone screen.” But for This American Wife, they’re taking a more immersive approach. “It's very freeing,” Pelsue reveals. “We're using [fewer] cameras, and there's a little more fluidity and freedom and it's a little freer in response to the architecture of the space.”

Breslin, Foley, and Pelsue are taking their own approach to how film influences reality TV, and their show, both energetically and aesthetically. As far as how the Housewives do it, and the connection between documentary film and reality TV, Breslin says, “My friend is a producer on the shows [and] the hardest thing, and the thing that you cannot miss when you're on site, is the reaction shot: because you can't fake it.”

He continues: “You can fake everything else, you can fake the fight. You can fake the accusation, you can fake the entrance, but you can't get an authentic reaction shot a second time.” Foley says, “[You see how reality TV is] aiming for these classic tableaus and failing; [that] is something that we're interested in.” He laughs, “Or you know, maybe not failing, but queering them.”

“Russian Ark was a huge source of inspiration that [dramaturg] Ariel [Sibert] brought in,” Foley told me, referring to Alexander Sokurov’s experimental historical drama, famous for being the longest unbroken shot in film history, at 96 minutes. Pelsue adds, “It was kind of helpful, [but it] was actually when we watched the finale of RuPaul's Drag Race: All-Stars [Season 3], [which features the] ‘Hey Kitty Girl’ music video, that was most helpful.” Finding the one-shot music video helped clarify that what they were doing was a mix of the esoteric and the popular.

For the domestic thriller, Julianne Moore’s first major role, Breslin was drawn to how “the house is a character in the first half of the movie.” Breslin says, “And in a broader sense, the culture around her which is defined by architecture is infecting her, and you can't really tell what it is. It's this uncanny quality.” The team was also inspired by its opening shot of a car “moving through the suburbs,” and felt that Safe, and its connections to cinema melodrama, would be a crucial component to the piece. “That kind of Fassbinder/Sirk/Haynes triangle: all a lot of those movies [are] about domestic situations, on women.”

In Haynes’ film, Moore begins experiencing allergic reactions to the passive, bourgeois world around her, creating a sense of claustrophobia rooted in the environment in which she lives. The Housewives constantly are negotiating their own relationship to domesticity and traditional gendered roles, and while they may not be having nosebleeds implicitly caused by more conservative norms, their ambivalence about the kinds of lives they want to lead, like Melissa Gorga on New Jersey’s recent season tension with her more traditional husband Joe, has come to heavily shape the show’s narrative and thematic arcs.

“Oh, I've heard of it,” Foley tittered, jokingly nodding to the iconographic hold the documentary, about an upper-class mother and daughter in their dilapidated home, has on gay culture. Pelsue, though, was compelled by how it approached camera framing in the documentary, describing its similarities to the camera movement on The Real Housewives shows. “It's an incriminating thing where you're filming somebody and then you pan over to like a raccoon in the corner,” he said. Breslin added, “The cameras are writing an essay on them.”

The three also spoke about the connections between Grey Gardens and The Real Housewives of New York, particularly with regard to Sonja Morgan’s embrace of the reference (“There’s nothing grey about my gardens!” she says with the single entendre wit of Mae West), as well as Carole Radziwill’s connection to the Kennedy family [Radziwill was married to JFK Jr.’s best friend and cousin Anthony Radziwill].

Another Douglas Sirk-inspired pick, Pelsue explains that Rainer Werner Fassbinder’s way of framing people within frames was particularly visually inspiring. “Everything is like down a hall in the doorway, [everyone is] imprisoned by frames,” he says. The Housewives are inclined to also use this composition strategy, and Foley brings up a particular moment in an episode of RHONY from last season: “In the Berkshire's, Luann [de Lesseps] storms out and you have this amazing shot of her sobbing in the dark, through this front door, [in] this gorgeous, warm light.”

To complete the triangle, Pelsue talks about one of his favorites, Sirk’s classic melodrama All That Heaven Allows, but clarifies it’s more Sirk’s sensibility than the specific visual aesthetic that fuels This American Wife. “There's this famous shot of Jane Wyman, watching herself in the reflection of a television,” he considers. “The inference that like the television will come [to] life, I think, is an intriguing fear.”

At its beginning, there was an anthropological nature to The Real Housewives, curious about the ways these women lived, not necessarily how they caused drama. So it makes sense that Lauren Greenfield’s documentary about the journey to making the biggest home in America would be useful in their research. “The Housewives are sort of like a post-recession text,” says Breslin. “We have become obsessed with the Queen of Versailles for another project, but I think that that relationship to the cusp of recession, opulence, and luxury [is fascinating].”

“We're getting ready to film this opening sequence in a car, and Primary is beautiful, early [direct] cinema, [and] what I find the most striking about it were the shots that I feel like I've never seen, that are shot from a moving car, but you don't see any of the car,” Breslin says about the film following the 1960 Democratic primary election in Wisconsin, between John F. Kennedy and Hubert Humphrey.

The film was a major development in documentary history, famous for its use of new, lighter equipment, which added to the mobility of the filmmaker to achieve a greater sense of closeness to the subjects. Breslin finds the relationship between documentary film and reality television fascinating, and an essential foundation of This American Wife. For Breslin, “The Housewives are [all] about the playing out of politics in different ways [but in] a domestic sphere.”

While many of the films that have influenced This American Wife are concerned with the domestic and the feminine, Federico Fellini’s iconic 8 ½ was essential to how the show would handle gazing. About Fellini’s technique, Foley says, “He'll fool you with a pan through this gorgeous theatrical scene, and then they'll just be characters. They're staring directly into the lens of the camera.” The self-reflexivity and self-awareness of the film and the Housewives was an integral part of the creation of the show. “We’re always talking about the gaze of the performers into the camera, certainly with reality TV; who looks and who gets to look, right?” Foley asks.

The team is a little more coy about the connection Nicolas Roeg’s thriller starring Donald Sutherland and Julie Christie (famous for its controversial sex scene and shocking ending in which Sutherland’s visions of violent death were foretelling his own, a dramatic and surreal reversal) has to the show, but Foley says the film is “a psychological thriller that has a very impressionistic relationship to grief and trauma, which is relevant in our understanding and our attachment to the Housewives.”

Domestic spaces and architecture have especially informed this version of This American Wife. “Theatrical architecture and domestic architecture: we're talking about frames, that's essentially proscenium, you know?” Breslin says. Filming in a McMansion in Great Neck has even shaped the structure and themes of the piece, which he describes as this “weird approximation of your combo platter of European architecture.” With regard to Luis Buñuel’s surrealist satire, which is about a group of upper-class people who go to dinner and are unable to leave the room, Pelsue says, “[These are] people who can't leave this home, this luxurious space. They’re trapped. I think it's an interesting jumping-off.”

The rot beneath the affluent, excessive surface in original The Stepford Wives, based on Ira Levin’s horror novel, is a jumping-off point for a show about The Real Housewives, but the team found its aesthetic approach particularly of interest. What This American Wife will offer aesthetically that Circle Jerk did not is the ability to “move fluidly through a fixed frame.”

While Ingmar Bergman’s existential horror film doesn’t visually inform This American Wife, Foley says it is “energetically very important to the show.” Focusing on the psychosexual relationship between an actress (Liv Ullmann) who has gone mute and the nurse (Bibi Andersson) who takes care of her, and the bizarre energy between them, he teases, “That kind of relationship that those two characters [have] has been a really inspirational thing for us.”

Though they’re not films, the visual language of Architectural Digest home tours provided the team with inspiration. “They are famously continuous takes and inform the way that certain things should be filmed, or what makes certain [household] things look alive,” Foley says. There’s an Architectural Digest tour aspect to much of the Housewives as well, and when the team spoke with a producer on one of the franchises, he revealed that the home parts were one of the toughest aspects of filming. “[He was like, ‘It’s] sort of a pain in the neck, whenever [we] go into a new space, [we have] to capture copious amounts of b-roll to signify the luxury and the opulence.’”

This American Wife will be streaming live from May 20-29.