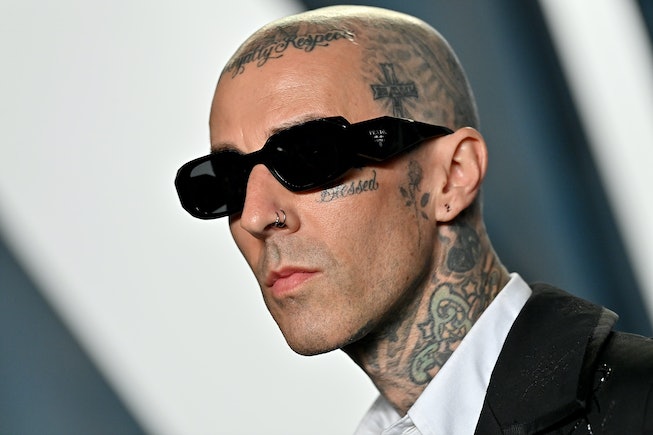 Travis Barker, Blink 182 drummer, famed pillar of the pop punk resurgence, and husband of Kourtney Kardashian, was rushed to the hospital Tuesday night after experiencing an undisclosed medical emergency.

First reported by TMZ, Barker was first taken to a hospital near Calabasas, Calif. before later being transported to Cedars-Sinai Medical Center in Los Angeles for additional care, with Kardashian by his side.

Barker allegedly was hospitalized for pancreatitis following a colonoscopy. His daughter Alabama posted “Please send your prayers” on Instagram Tuesday night, indicating that Barker’s condition could be more serious. She also posted a video of her holding Barker’s hand in the hospital on TikTok, with a heart emoji. Barker himself also tweeted, “God save me,” at 10 AM Tuesday morning, during the ordeal.

The last time Barker was publicly hospitalized was in 2018, due to blood clots found in each arm, according to People, along with a staph infection and cellulitis, which prompted Blink 182 to cancel tour dates.

Barker has suffered health issues following a 2008 plane crash that killed four of the six passengers and left him with third-degree burns on 65% of his body. He nearly lost his right foot and was in hospital for eleven weeks undergoing 27 different surgeries and skin grafts. The incident prompted also him to quit prescription pills.

Barker has more recently been in headlines for his whirlwind marriage to Kardashian — more specifically, the Dolce & Gabbana-outfitted ceremony at a castle in Portofino, Italy with enough white lace and candelabras to cover the Vatican itself. It was the third wedding ceremony for Barker and Kardashian, who also got married in Vegas — Elvis impersonator and all — as well as at a courthouse in Santa Barbara, sort of a choose your own adventure that appeals to each and every one of their fans.

Barker is also having a major cultural moment for his role in ushering pop punk into its 20-year resurgence, producing Avril Lavigne’s comeback album Love Sux, Machine Gun Kelly’s Tickets To My Downfall and jxdn’s Tell Me About Tomorrow.

“I know kids that heard Tickets To My Downfall and were under the impression it was a new genre of music that was just invented,” he told NYLON last year.“ ​​At one point, Blink-182 was for sure that to some people ... For us to be, to a kid or a teenager, like, ‘my first punk band, Blink,’ and then as long as you discover Bad Religion and as long as you discover Minor Threat or Fugazi, then I'm happy. So if at this moment right now, if MGK [Machine Gun Kelly] and Jaden inspire people to go buy a Descendents record, I'm stoked.”