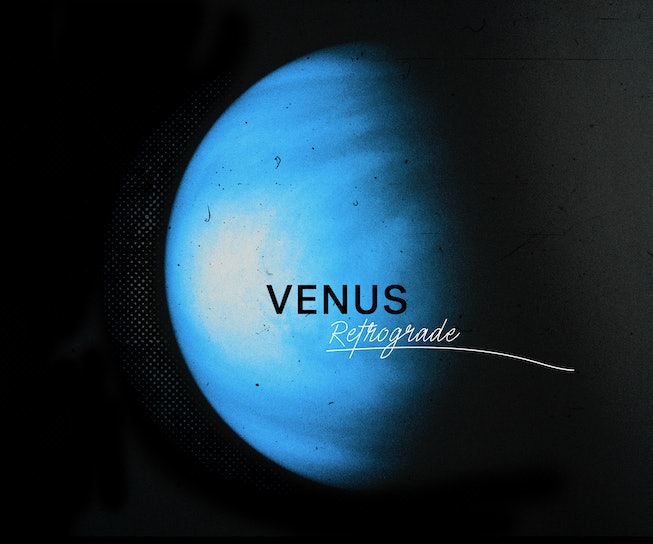 Venus glides through the zodiac like a classic Disney princess, ever-incarnating into her best self, ready to be discovered, adored, and embraced by all. Her key initiatives are to debut and embody. Venus may be the planet of love, but she’s also the planet of beauty, and all its promises: public acclaim, lush surroundings, and perfection realized. When she goes retrograde, from December 19 2021 through January 29 2022, our entitlements, our rewards, and our fantasies crash into the ground. Camilla Cabello and Lily James won’t make it in this Cinderella story; you’ll need the grit of Brandy and Drew Barrymore to roll with the punches. Here’s how to survive the Venus Retrograde in Capricorn.

Venus (and, incidentally, Mercury) retrogrades in Capricorn, the sign most concerned with traditional success. This is a sign of striving, struggling, and ultimately, conquering. Its terms are not vague, metaphorical, or emotional; Capricorn craves world domination. When Venus leaves Sagittarius and enters the devil’s domain, she goes from New York bon vivant to New Jersey mob boss, from Parker Posey to Edie Falco. The beauty, bliss, and romance she craves are best realized in tangible markers of success: cold hard cash, the mansion with a pool, and the corner desk. Christopher Moltisanti can’t afford to keep this queen!

It’s not all shallow materialism. Capricorn holds the seat to power, the throne of rulership, and if she’s going to rule, Venus needs to look the part. The Venus in Capricorn archetype is about owning power by wearing power, by embodying the warrior diva archetype, even if it is at the risk of becoming a #girlboss from the infernal pits of hell. At some point, Cinderella, Jasmine, Ariel, Snow White, and Sleeping Beauty are going to be ruling the kingdom and running the castle. They better take control.

Of course, with FKA Twigs, Mary J. Blige, and Donna Summer among its ranks, Capricorn’s women are survivors. As Buffy Summers, herself a Capricorn, is taught, the Slayer forges strength from pain. And Venus in Capricorn, at her highest vibration, crafts beauty out of struggle. This is the moment to take pride in the harder angles of your self-definition, the experiences that have left muscles and scars.

Capricorn’s cravings for a linear, materialist success story will come under fire when Venus goes retrograde. Just weeks after Thanksgiving, when your family pressured you to be doing more with your life, and into Christmas, when a gift under the tree is supposed to sum up your entire existence, this retrograde forces you to confront the false standards you’ve been holding yourself to. What have you been working towards? To embrace a beauty that is bone-deep, a sense of poise and confidence, you’ll have to cut through the facades, the delusions, and the distractions. You must rewrite your terms of success.

At this point, the capitalist propaganda machine has made us all believe that if we hustle just a little bit harder, we’re entitled to have it all. After witnessing the political administration’s implosion, a public health crisis, and the economic meltdown of the past two years, it’s likely occurred to you that you may not get the house and the retirement fund your parents have long mythologized. This Venus retrograde will cut deeper, helping to free you from any lingering delusions of making it through ruthless self-interest alone.

Of course, when Venus ends her retrograde, on January 29 2022, she’ll be ready to put her graces to the best possible use for another full month in Capricorn. You can and should claim success. But only if it’s your success, aligned with your ideals, dreams, and desires. Once this retrograde is over, you’ll have a clear vision of what you really want, and the momentum to get it.

As you strike down old delusions of career triumph, so too will you have to destroy those false promises of perfect love. It’s likely that the ones who got away and the ones you wish would stay away will rise from the grave, craving blood. Like Buffy, you are called to slay them all. Capricorn badly wants to believe that after crawling through mud and barbed wire, the work will be worth it. And so, when your exes show back up, you’ll be tempted to give in to the exhaustion, the loneliness, the boredom, or the threat of a bleak unknown future. The old lovers in your life bring with them lost and discarded possibilities, happy endings long ago dashed, which you’ll have to once again put in the ground. This Venus retrograde will force you to confront the ways you have taken frogs for princes, and waited for a transformation that would never come. You’ve come this far on your own. Don’t give in to dead weight now.

VENUS RETROGRADE: HOW TO DEAL

Put yourself in the driver’s seat. Get clear on your endgame: in your career, in relationships, and in terms of how you want to enjoy your life. What do you work for? How does your money feed you, and those around you? Where is the hustle leading? What do you want your big future to look like? With this retrograde, you’ll clear out the decayed dreams, and create something new.

Look back on the experiences you’ve synthesized on your own, and the ways you’ve learned to take care of yourself without anybody. It’s not that you have to stay in full Sarah Connor forever, but in recognizing your own ability to look out for yourself (especially after the last few years), you’ll feel less susceptible to the false offers of past lovers. You’re in charge now.