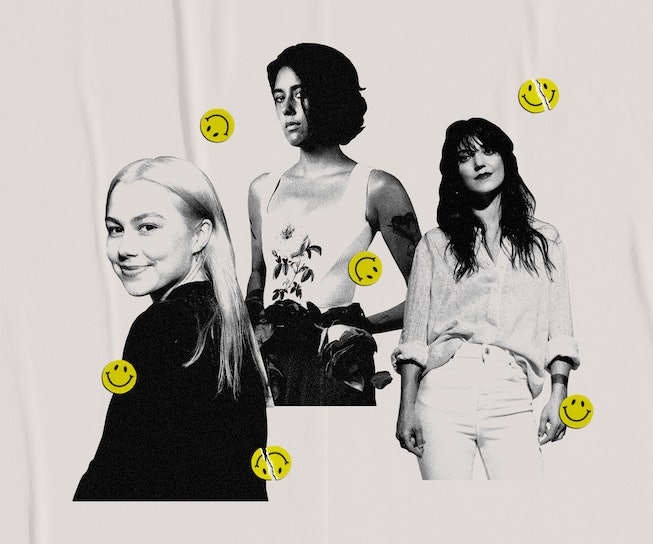 I’ve been self-isolating for 64 days. On day six of quarantine, I made a playlist of my favorite sad songs. It has 96 tracks on it — nine by Bright Eyes, seven by Elliott Smith, and even one by Taylor Swift (“All Too Well”). Its total runtime is almost seven hours exactly. Fifty-eight days later, I still listen to it almost every day.

Like everyone else, I’ve felt sporadic bouts of extreme emotion over the past few months: loneliness and sadness, anger and confusion, more loneliness. I’ve found escape in TV shows that allow me turn my brain off, like One Tree Hill or anything on Bravo, and in the nostalgic movies that I can already recite line for line. They are a reprieve from all the feelings that can take over when there’s not much else to focus on. You’d think this would also be the perfect time for pop music — all bubbly and fun, with its loud synths and thumping bass lines. What’s more escapist than that?

And yet, I keep returning to the one playlist I made week one, and all the melancholy and yearning and confusion that comes through the speakers with each song that plays. The songs pumping out of my speakers as are as melancholy and yearning and confused as I’m feeling — not exactly mood-altering emotions. So then why do they make me feel so much better?

To get some answers, I reached out to some masters of the sad song for their theories. “Man, it is hard to put a fine point on this one,” writes Chris Carrabba, who, as the frontman of Dashboard Confessional, has been singing about heartbreak for two decades. “I think sad music makes us feel good because it helps to release the pain or longing or regret that we are holding onto, and gives us a healthy way to release those feelings.”

Phoebe Bridgers, whose sophomore album, Punisher, is out next month, marveled that “sounds that someone made without you in mind can get into you months or years later and describe something about your own life that you didn’t know could be put into words.”

“Sad songs make me feel better because I’d rather feel something than nothing,” she says via email. “Music that changes your mood is like alchemy for your feelings.”

For Sharon Van Etten, music steps in where language falls short. “Sometimes you can't put feelings into words,” she writes. “Sometimes you want to feel and let it wash over you. And feel a connection. Music takes you back and it brings you back, from beginning to end.”

Tomberlin, meanwhile, finds so much solace in sad songs that they’re not even really that sad. “Sure, some hit hard in the right moment, like when a sad song mirrors your own sadness, sweeps you up, and carries you away," she says. "But some sad songs just give you strength to deal with your own sadness or creative ways to view difficult times.” And per Half Waif: “Listening to sad music when you’re sad is a mirror, and we all love to be seen. It’s like shouting into a canyon and hearing your own voice echoing back — there’s undeniably something lonely about the sound, but there’s also a comfort and relief in having that which is familiar returned to you. Maybe it's also a way of taking ownership of an emotion that often leaves us feeling a loss of control.”

Research attests to the appeal of musical wallowing: A 2008 study conducted in Japan and published in Frontiers in Emotion Science found that participants largely preferred songs played in a minor key (and perceived as “sad”) to those played in a major key. As for why that may be, several other studies found that listening to sad music can raise levels of the hormone prolactin, which produces “a consoling psychological effect.” The most common conclusion, however, comes down to emotion itself, particularly nostalgia. Nostalgia was cited as the emotion most frequently associated with sad music by participants in the 2014 survey “The Paradox of Music-Evoked Sadness.” “Listening to sad music can lead to beneficial emotional effects such as regulation of negative emotion and mood as well as consolation,” write co-authors Liila Taruffi and Stefan Koelsch, who surveyed 772 people from around the world.

“A lot of people say they enjoy sad music, which is interesting because you don’t enjoy feeling sad,” Dr. Simon Procter, a sociologist-music therapist and director of music services for Nordoff Robbins UK, tells me. “There’s a very famous music sociologist named Tia DeNora who talks about music as technology of self, based on the idea that we’ve all got the capacity to use music to affect the way we are and to also affect the world around us.” Think blasting Top 40 to pump yourself up before a night out or setting the mood on a romantic date with a love song. “There’s been research to suggest that sad music mirrors the feeling of being sad because it is slow, and there is less going on, your mind wanders during it, and you’re more likely to be reflective. For some people, that’s a really good strategy to allow you to process things.” It doesn’t hurt that we can pull the feelings machine out of our pocket whenever we need it, Procter says. “Music has an ability to be a companion, and therefore it is with you in your sadness. It accompanies you, so you’re not alone.”

I can’t remember the first sad song I ever heard, but I can remember the first one that made me feel less alone. It was the end of my sophomore year in high school, a time when I was starting to discover the bands that I still love today. It was also the beginning of my depression, though it would be another two years until it was officially diagnosed. Suddenly everything was a struggle: being social, maintaining friendships, going to school, getting out of bed. So, I retreated — and I listened to a lot of sad music, and a whole lot of Bright Eyes, then (and still now) my favorite band.

Who knows how many times I had already listened to my favorite album of theirs, Lifted or The Story Is in the Soil, Keep Your Ear to the Ground, but it was at this time when I felt so low that I suddenly found reprieve in its penultimate track, “Laura Laurent.” On it, Conor Oberst sings lines like, “Laura, are you still living there/ On your estate of sorrows? /You used to leave it occasionally/ But now you don't even bother” I also have a memory of a live recording of the song on which he intros it by saying, “This is a song about a girl I knew once and she was so sad that sometimes she truly couldn't stand up,” but that seems to be lost to the depths of the internet or my iPod mini.

Listening now, sure, maybe they aren’t the subtlest of lyrics, but at that time, living in what felt like a perpetual fog, it was proof that those feelings existed and that it might even be OK to have them. Almost 15 years later, I don’t need that song the way I needed it then, but I still feel the same relief every time I hear it. And it was the first song I put on that playlist.

Here, five singers share their own favorite sad songs, plus a playlist including those and more NYLON favorites.

Phoebe Bridgers: “Look At Me Now” by Caroline Polachek

"It’s crazy that sounds that someone made without you in mind can get into you months or years later and describe something about your own life that you didn’t know could be put into words. My current favorite example of that is this song."

Sharon Van Etten: “I Found a Reason” by Velvet Underground

“Every song I love is stitched somewhere inside my soul, and I try to reconnect with what it means to me each time.”

Chris Carrabba: “From the Edge of the Deep Green Sea” by The Cure

“My favorite sad song to listen to to feel better is definitely 'The Edge of the Deep Green Sea' by The Cure. The lyrics seem to almost be at odds with themselves. They are all at once in the moment of deepest despair and total recovery. They seem to vacillate powerfully between the two without leaving the listener with the narrator's final state of being. In doing so, the listeners' own emotional place defines the lyrics as much or more than Robert Smith himself. That is what makes Robert Smith the enduring genius that he is. ‘I wish I could just stop, I know, I know the moment will break my heart. Too many tears, too many times, too many years I’ve cried over you.’”

“This song is magic. It's kind of my angry sad song. I recommend listening to this song in motion, whatever that looks like for you. For me, it is a variety of bike riding, drives to nowhere, walking, and running. Try to listen to this song and not feel your own power, even if it's a little worn out in this weird time.”

Half Waif: “The Park” by Feist

“The way the chorus sort of drips down is pure catharsis.”