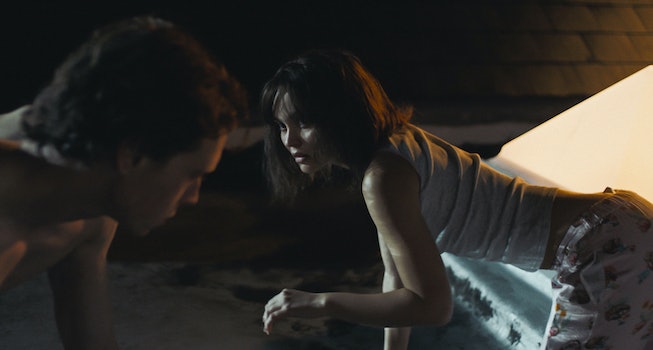 Love is famously wild thing, and it’s probably even more all-consuming when you think you’re a wolf. This is partly the premise of the forthcoming film Wolf, an intriguing drama about a young man who thinks he’s, you guessed it, a wolf. Wolf premiered at the Toronto International Film Festival earlier this year, where critics were drawn to leads George MacKay and Lily Rose-Depp’s performances. Wolf follows Jacob (MacKay) as he shocks his family by eating, sleeping, and living like a wolf. He’s sent to a rehabilitation clinic of sorts, where one of the mysterious patients, Wildcat, refers to it as “the zoo.” Not a great nickname for a place that’s allegedly supposed to help its patients! Anyway, Jacob and Wildcat’s friendship morphs into infatuation, and leaves him at a crossroads: Will he renounce his true self for love? As they say in the biz, it’s a tale as old as time. Below, find everything there is to know about Wolf so far.

You won’t find “species identity disorder” or “species dysphoria” in the DSM-5, but the term applies to people who feel as though they’ve been born in the body of the wrong species. Writer and director Nathalie Biancheri elaborated before the film’s TIFF premiere: “I’m going to take the intellectual, emotional side that I find most interesting, and that is, what does it mean to feel like you belong to different skin? Which is obviously a very topical, and to use the dreaded word, universal feeling to explore. And, I think to a certain extent, each one of us feels it for different reasons.”

The cast is as buzzy as it gets

MacKay’s emerging career includes 1917 and Captain Fantastic, while Tumblr’s favorite “It” Girl Depp continues her career after roles in The King and Voyagers.

It’s coming to theaters for the 2021 holiday season

Focus Features will release Wolf in all its canine glory in theaters on December 3, 2021.

The Wolf trailer sets up the isolation of the rehabilitation center right away. It’s tucked deep in the woods, and fellow patients are shown next to their preferred animal species, and encouraged to “resume a happy, healthy, and rewarding life.” But this is Hollywood, so guess what? Things are not always what they seem! There’s tension and abuse from the staff, love in the air, and of course, some cinematic howling at the moon.