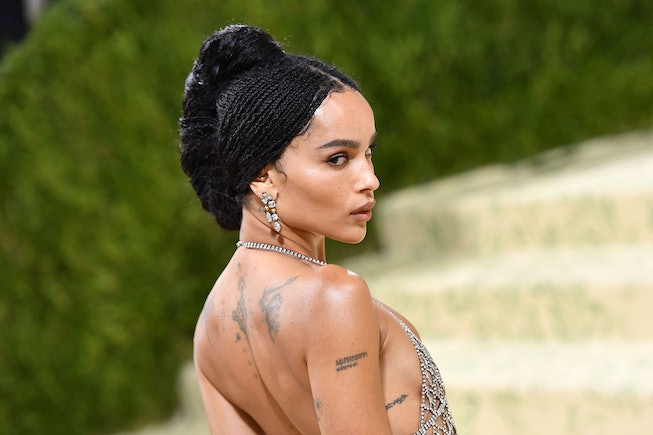 There are few constants in the world. The sun will always rise in the east and set in the west, gravity will always have its way with things, and Zoë Kravtiz will always be one of the most effortlessly cool famous people of all time. It’s that je ne sais quoi, baby! Also the fact that she’s stacking her filmography with cool projects, like her directorial debut Pussy Island, and like many effortlessly cool people before her, she’s also a musician. Her band Lolawolf may have disbanded, but Kravtiz has a solo album in the works, and you already know the ubiquitous producer Jack Antonoff is involved.

In an interview with AnOther Magazine, Kravitz teased at what her new music has in store, noting that she’s been working on it with Antonoff “on and off” for a few years. “Jack is a fantastic producer — he’s so good at really tapping into who he’s working with and not making it about him,” she explained. “Some producers want to make it about ... like, ‘I’m going to put my sound on you.’ It’s what I experienced with my band. But for him to want to help me realize what I’m hearing in my head has been a really wonderful experience and very therapeutic.”

“I wrote it over a long stretch of time, subconsciously just capturing this range of emotions, which has been interesting to look back on and see what I was writing about them, then and now and in between,” she continued. The record is going to be a personal one, and will likely reflect Kravtiz’s ups and downs over time, including her marriage and subsequent divorce from actor Karl Glusman after 18 months.

“It’s personal. It’s about love and loss,” said Kravitz of the music. “I got married. I got divorced. Separations, break-ups are sad but are beautiful things too. It’s about the bittersweetness, that beginning and that end. It’s so complex, that space, when you’re in between heartbroken and mourning the loss of something and excited for what’s ahead of you.”

Kravitz is the latest musician to work with Antonoff as a producer. Antonoff’s fingerprints have been been all over the pop-rock spectrum, and in 2021 alone his prolific output included Lana Del Rey’s Chemtrails over the Country Club, Lorde’s Solar Power, St Vincent’s Daddy’s Home, and Taylor Swift’s Fearless (Taylor’s Version).