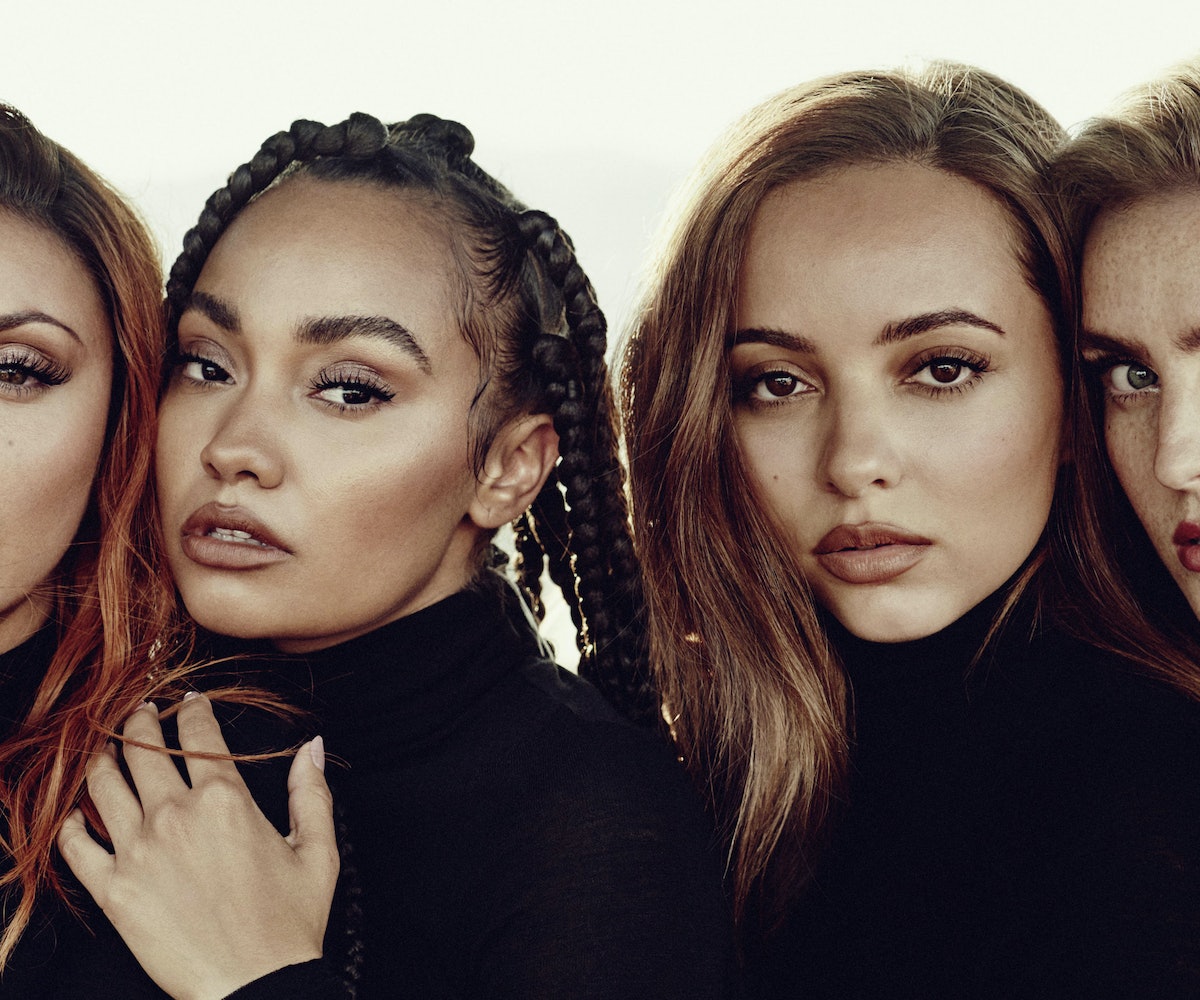 There was a time when Little Mix wanted to be the biggest girl group in the world, but now that they've achieved that status, there's only one place left to go. "I guess we just won't stop until we're, like, the biggest band in the world," Jade Thirlwall admits, adding, "we've still got a long way to go."

Their latest album, LM5, is one that will make casual fans become stans. Its welcoming message—"She is a bad bitch/ made up of magic"—is sung in angelic four-part harmony, a perfect encapsulation of their ethos. It's "The National Manthem," and in 30 seconds and 23 words, they've summarized the essence of Little Mix: four women who could sing circles around most of the pop industry but who choose to lend their voices to bolster the pillars of female empowerment.

It's pretty clear that there's a great divide in how tabloids portray Little Mix versus what stans think of the band, but a lot of the negative attention is due to one thing in particular. "Most people don't know that we write our own music," Leigh-Anne Pinnock says, "because we came from a reality show."

Though it's been a long time since their appearance on The X Factor, critics seem to cling to it. "I think people will think, because we're a girl band, that we're puppets, and we just kind of go with it," Pinnock said. "That's the most concerning thing, because we have every little bit of control that you could imagine." This album—their most coherent and bop-filled to date—is, in fact, the one they've had the most control over thus far. They co-produced the entire thing, wrote on nearly all the songs, and found a sonic identity that isn't just girl-group-that-can-sing.

When they're not belittled, they're scrutinized for their apparel or, more appropriately put, the lack thereof. "We're so over it," Thirlwall laments, "like what is wrong with you people? We just put on one of the best performances of our life, and the first thing you want to talk about is that we've got a bit of tit out." It's a hot topic for the band, and they're rightfully fired up about it, now more than ever.

Pinnock admits it's becoming more and more noticeable as the group has eased into a "feminist frame of mind." She mentions, "We went out the other night, and… the things they were saying about Jesy's boobs… Like, so what? She's got boobs, we've all got boobs, it's not a big deal. They just sexualize us so much, the media." Thirlwall piped in, "To us, it's bad journalism… we think the media is definitely missing a trick here."

One particular brush with the media ended up as a song on the album, they tell me. The girls were "papped," rushed by the paparazzi while leaving Sony, and "people were saying really nasty things," Pinnock explains. "We were like, 'We need to write a song about this; we need to kind of push it and make it positive and try to help people who have been feeling crap.'"

That experience became "Strip," a down-and-dirty manifesto for loving all that jiggle and telling body haters to screw off. "Body image was a big talking point for us on the album," Thirlwall says. "With social media, there's a lot of pressure on young people to look a certain way, and I guess we feel like we're more confident now."

You can hear the confidence on the album, in the way they assert the self-love they've learned and the feminism perfected by girl groups past. They've channeled it into a sound that's edgier and feels like something such outspoken girls would actually want to listen to (imagine if Play, short-lived Swedish girl group who popularized "Cinderella," had gotten sonic inspo from Destiny's Child—it'd probably sound something like LM5).

There's always been a feminist element to Little Mix, but until now it's been very surface-level. On LM5, it intermittently dips below that surface, and you can hear the group learn and grow and share these lessons with their fans. Pinnock tells me she's bored of the era of influencers: "I want to see something that's gonna inspire me. I wanna see people talk about real issues." So they did just that for themselves and for fans.

They found women who could say what the group couldn't, activists and artists who are passionate and well versed on the specifics of their lane of empowerment—Megan Jayne Crabbe, aka @bodyposipanda, and Daughters of Eve co-founder Nimco Ali who spreads awareness on female genital mutilation, are amongst the many they've shared—and handed over the Little Mix platform to them, instead of trying to take on each and every topic themselves, in the process, lifting up a diverse body of women. "We're at that stage in our career where we want to make sure we're using our power and our influence on our younger fans for the better," Thirlwall tells me, and it's pretty plain to see, on social media and beyond.

They leave their most nuanced feminist note for near last on the album. Thirlwall points to a specific moment in time that inspired it. "I wrote 'Woman's World' just last Christmas when the #MeToo movement was really taking off," she tells me. "I remember going to the studio and feeling very angry with what I was reading and seeing." She adds, "I don't think we've ever written songs that are quite political or truly mean something with what's going on in the world right now," and she's right—this might be a vein in which they choose to grow in the future (I'm not saying I'd like them to sing Judith Butler word-for-word, but it's quite satisfying to watch the feminist evolution of women in the spotlight).

But it's not their evolving feminism that's going to promise Little Mix a continued uphill trajectory. It's that they actually fucking like each other. A depressing rarity in the realm of concocted bands, by reality television or otherwise, and their lifeline. The day-to-day of the biggest girl group in the world isn't pretty; it's exhausting and would push anyone to the edge should they not have the proper support system. Thirlwall admits they rely on each other heavily, "We always feel like we don't know how solo artists do it. We stick together, and when one of us feels really crap about herself, there's always three other girls that can pick you back up and make you feel better."

"We've learned that we need to take control of our career," Pinnock adds, "because at the end of the day, we only really have each other." But that's really all they need as they embark on their quest to be the biggest band in the world.