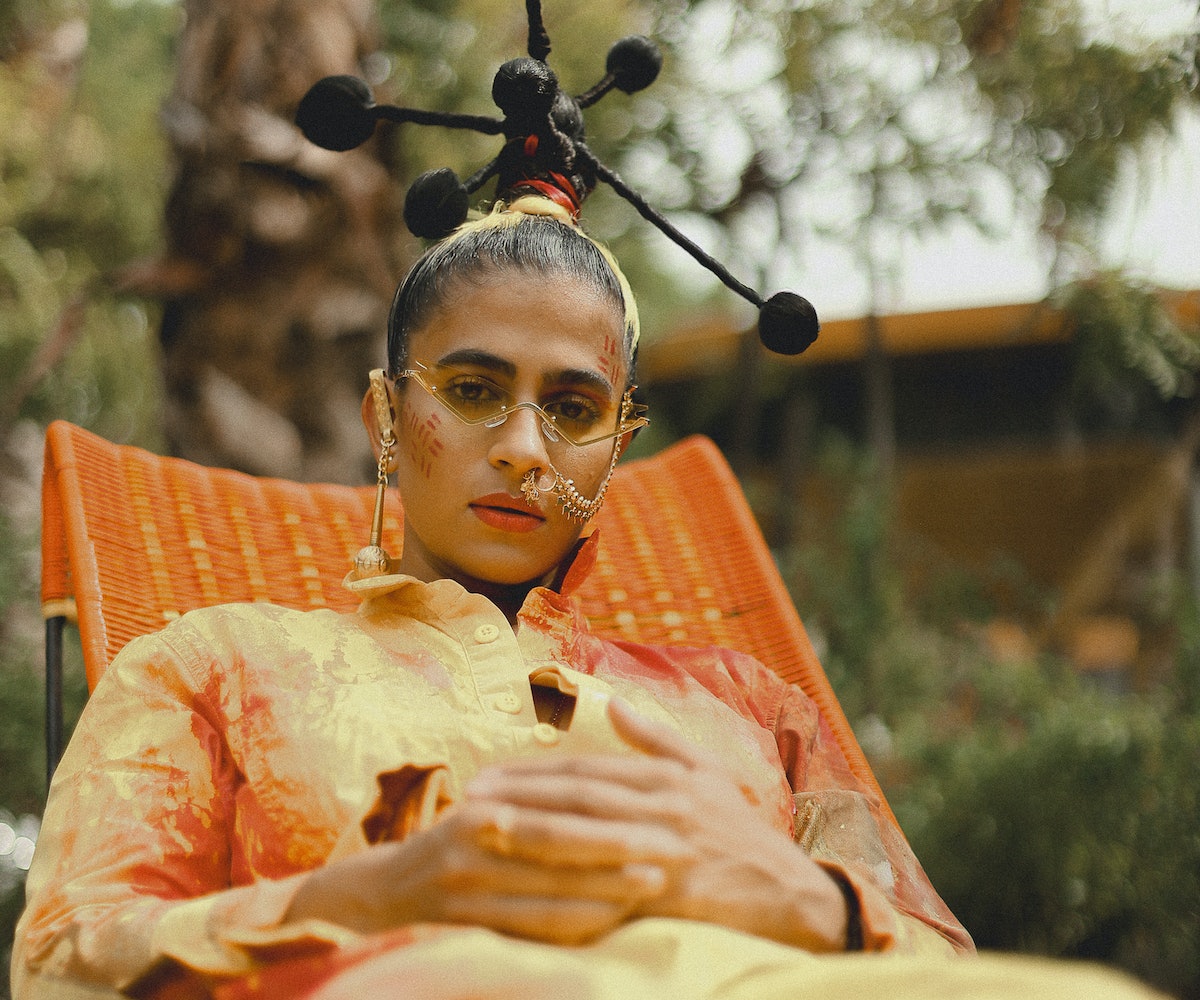 Madame Gandhi, real name Kiran Gandhi, meditates every day "without fail." The multifaceted artist, who at one point drummed for MIA while simultaneously achieving her MBA from Harvard, knows it's necessary to check in with herself to manifest positive change. In fact, it's something that she's applying on her forthcoming EP Visions, imagining and projecting a better world around her in both lyrics and visuals, even sampling her mother's morning meditations on the first track "Waiting For Me" to translate her personal practices directly into her art.

Visions is the second EP in a set of three, an inward turn from her 2016 debut, Voices, on which she asks herself big questions "in order to imagine a brighter future outward for yourself and for our own humanity." Gandhi adds, "I do believe we have to be brave enough to do the work, to spend time with ourselves and look inward and ask, What really makes me happy? What honestly makes me happy? When do I feel my best so that I can optimize for my own joy? And when we optimize for our own joy, that's when I believe we actually have the fuel to be able to even serve others, to be able to even give."

Now, Gandhi unveils the visuals for "Top Knot Turn Up," a single released in 2018 that now finds its home on Visions. When she was younger, Gandhi recalls her family pleading with her to take her hair down from a tight bun, but she couldn't understand why. She recalls thinking, "I'm always busy, whether I'm doing sports or I'm playing music or I'm studying for school... I don't think there's ever a time where I'm just there to look beautiful for the sexual consumption of somebody else." And so the title for this track became her motto, coined by her friend [FKA Twigs dancer] Derek Auguste during a show of hers in Mexico City, a mantra for getting shit done.

Sonically, Gandhi used "Top Knot Turn Up" as an opportunity to "provide and design the alternative" for the trap and EDM music she loves, without the "violently misogynist lyrics" that so often come with the genres. "I don't want to turn up to the sound of my own oppression," she notes. Partnering with Brazilian trap producer Ruxell, Gandhi tapped into baile funk's heavy rhythm for the song, and combined it with her own vocal percussion and empowering lyrics.

A main setting in the new music video subverts Indian men's outdoor barbershops, to be a safe haven for women and nonbinary folks—an idea the Indian-American artist was originally against. "I don't want feminism to mean that we're constantly aspiring to fit male standards," Gandhi says. "I wanted us to be aspiring to something that we're creating on our own. But at the same time, I really did like the idea of reclaiming outdoor space, because many of us feel more safe indoors than we do feel outdoors, especially at nighttime." Over the course of the video, the barbershop evolves and grows in size; "You see more and more women and femmes gathering in the street. You see us reclaiming it. You see the evolution of it being a movement." Gandhi plays the role of the barber, and "with each person whose hair I'm doing, we are growing together. We have each other's back." The hair literally takes on a life of its own, with reproductive organs recreated in the hairstyles by Lady Soulfly, inspired by Ivorian artist KY, and Gandhi's hair a reference to her own Atomic Living TED Talk.

Gandhi is intentionally political in another scene, recreating a courtroom and standing in as judge, playing on a lyric in the song: "I'm fighting against the corruption on SCOTUS." She says, "We have this surrealist courtroom scene to reclaim our own rights, but to also subliminally inspire more women and femmes and queer folks who watch the video to remember that we have to infiltrate those spaces if we do want to make change." In the choreography, she moves "from an Indian mudra into putting that universal 'okay' sign onto our anatomy," in time with the lyrics: "My time is not your property when I'm productive like my ovaries." She says, "It's really incorporating the layers of my project, being Indian and then, of course, symbolizing the ovaries as this thing to reclaim power."

And those layers go beyond the "Top Knot Turn Up" visuals and lyrics—she's empowering others behind the scenes as well. "We were all really intentional about sourcing other women, femmes, and gender non-conforming folks to work on the project. Because in the industry, there are so many inherent biases that, if I put out a call for a DP or a creative director, et cetera, the names that are going to come back to me are John, Harry, Michael, Tom, Chris," Gandhi said. Instead, "Top Knot Turn Up" was created with a team of almost solely women—directed by Justine Raczkiewicz and using nonbinary stylists from They LA; Visions likewise was created with a "very valid spread of gender identities of folks." She hopes to instill this sort of power not just on her own sets and in her own studio, but everywhere. "I want to see more women and queer folk and femmes and folks with different abilities to be able to take leadership in their own community," Gandhi says.

Watch the video for "Top Knot Turn Up" and go behind the scenes on set, below. Visions is set for October 25 release.

NEXT UP
Culture
Not One, But Two BTS Documentaries Are Coming
Entertainment
Olivia Rodrigo Hinted At New Music In 2023
Entertainment
Taylor Swift Swept The 2022 American Music Awards
Culture
A Britney Spears-Inspired Musical Is Coming To Broadway