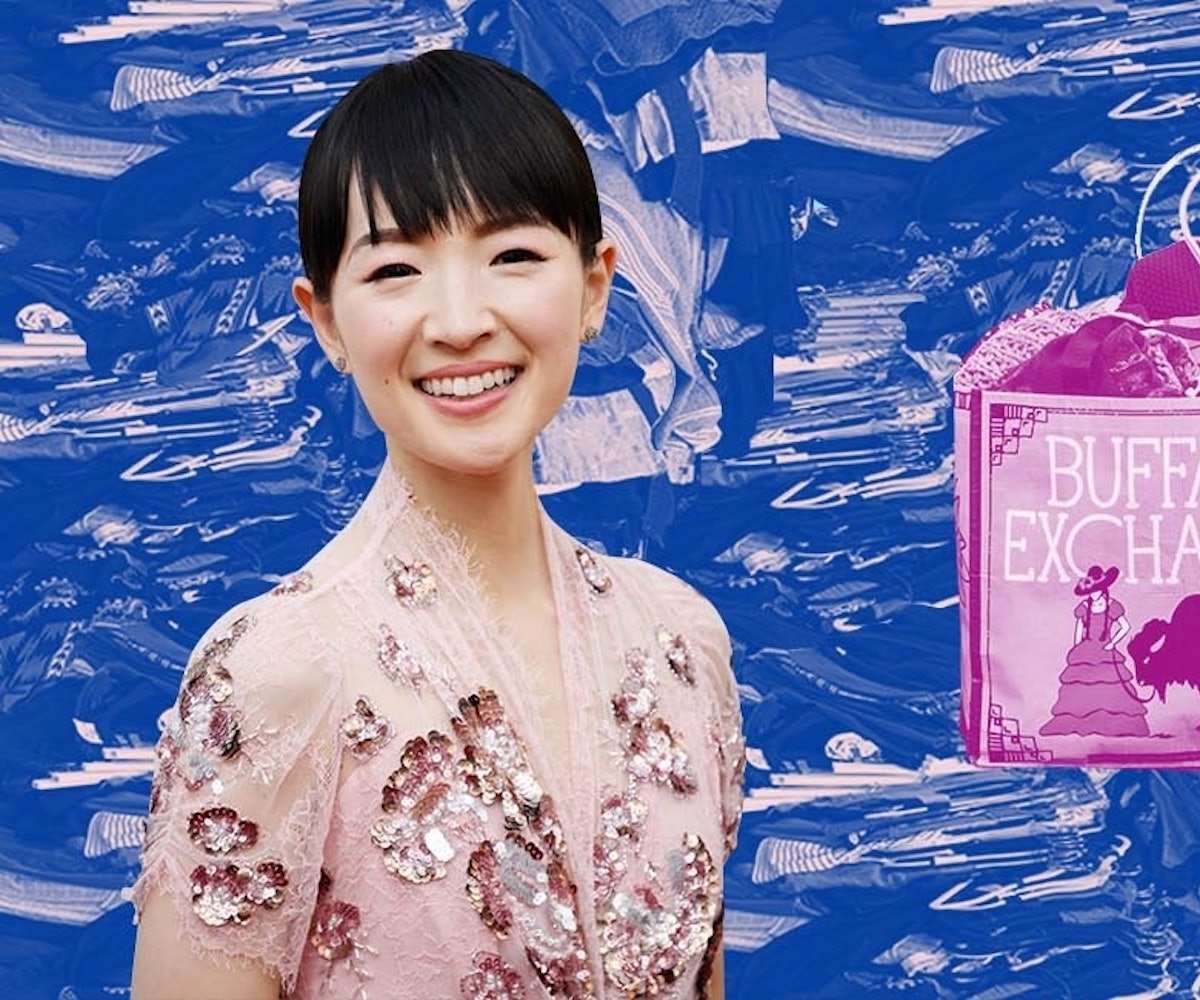 Earlier this year, Marie Kondo sent the country on a purging mission thanks to her Netflix series, Tidying Up, which has inspired people across the country to get rid of their physical—and emotional baggage—by prompting them to evaluate whether or not their belongings spark joy. If they don't, Kondo advises, toss them (but not before thanking each item for its service).

The only issue with this decluttering method is that once people finish piling their discarded belongings into bags, they then become someone else's (sometimes overwhelming) problem: thrift stores.

Carrie Peterson from Beacon's Closet says the company's stores noticed an increase in donations at the beginning of the year when the show premiered. "It is the first time we've been so crazy in the first quarter of the year," she says. "January and February are historically a bit slow, people are burned out from holiday shopping and are also broke." This year, though, sales increased by 50 percent. "People were definitely inspired by the show," she says. "One of the most common expressions at the buying counter was to use her last name as a verb: 'I Kondo'ed the hell out of my house.'"

Jade DeGrio, who's worked at Buffalo Exchange in Brooklyn for seven years, says she's seeing not only an increase in sellers, but an increase in the amount of stuff that people are bringing, also. "I think because she encourages you to take everything out of your closet and go through it, it's a little bit of a shift from people cleaning out their closets because of changing seasons or because they're moving," she says.

And with the changing of seasons now upon us (and, too, spring cleaning), thrift stores have been consistently busy, which isn't necessarily a bad thing. "We usually get excited about more bags because it increases the likelihood that we're going to find something really great," DeGrio tells us.

But, at the same time, as we've written about in the past, thrift stores (even pre-Kondo) get inundated with donations—a lot of which they can't accommodate in their own spaces. There are a lot of reasons for this, which you can and should read up on here, but in the meantime, we also asked a couple of thrift store employees what people interested in donating can do to possibly make the process a little more streamlined and a little less chaotic (for them).

See what they had to say, ahead.

Know what your thrift store/donation center does and doesn't accept

"We had some first time sellers, which is great," Peterson says. "And also some people who didn't make a distinction between us and a Goodwill, so they brought a lot of housewares, sheets, everything but the kitchen sink." Yeah, so, don't do that. If you've only ever seen clothing and accessories at a thrift store you frequent, don't bring your leftover books you've never gotten around to reading. One-stop-shop kinds of thrift stores, like Housing Works, typically have websites that go over in detail what items they take. "It just saves the customer time and it saves us time on our end sorting through things," Katherine Oakes of Housing Works tells us. Consult those before dragging your stuff there.

In the cases where you have items a place like Goodwill or Housing Works don't accept, Oakes recommends visiting sites like donateNYC, which has great recommendations for literally anything you want to get rid of. "They've put a huge amount of effort into making sure the smallest amount of things go to landfills and rather are being diverted to recycling or different kinds of processing plants or whatever it might be that can affectively dispose of unwanted items," she says.

Think about what it is you're bringing in

"My number one piece of advice to sellers looking to get cash for their items is to try to look at their pieces objectively and think, Would I shop for this? Is someone going to buy this? How much demand is there for this?" Peterson recommends. "For us, items we select are high-demand and in good condition. We allow some wear for vintage and hard to find items, but for your average tee that's been out in stores within the past few years, it needs to have some sort of rack appeal."

DeGrio adds: "We do have to take the condition of each item in mind, so if there's something that's just really excessively worn, or has holes, or stains, those are the things that we are not going to be able to buy, so that can sometimes lighten the load for people a little bit." In other words: One person's trash is, sometimes, also another person's trash.

Never ever throw things in the trash

Speaking of trash, try to never put your unwanted clothes there. Plugging this story again, but fun fact: The average U.S. citizen throws away around 80 pounds of clothing and textiles annually. A big percentage of that ends up in landfills, where they then emit a toxic brew of pollution while decomposing. In a lot of cases, like at all of the thrift stores mentioned in this story, if they can't accept your items, they'll either send them to a charity, another thrift store, to their company's outlet store to be sold there, or employees can advise customers where to donate items.

If you live in NYC, there are also resources like GreenTree, which handles textile recycling. And, thinking ahead, Peterson says if you do have to throw items in the trash, then make sure they're made of renewable fibers, "at least that way anything that ends up in a landfill will eventually decompose."

Be organized if you can

Yes, the focus here is that you're donating your items and that's a great thing but also consider there are actual people who have to sort through it. So, as Oakes recommends: "Be thoughtful about how you're throwing things into a bag. Don't throw your kitchen knives in with your clothes. It's always nice when people bring in nicely packaged organized donations."

If you can't, that's okay too. As long as you're donating, that's what really matters to most stores. More (good) inventory equals more sales and, in the case of Housing Works, more money they can put toward their mission of ending AIDS and homelessness. But it also doesn't hurt to be mindful in the process. We think Kondo, of all people, would appreciate that.