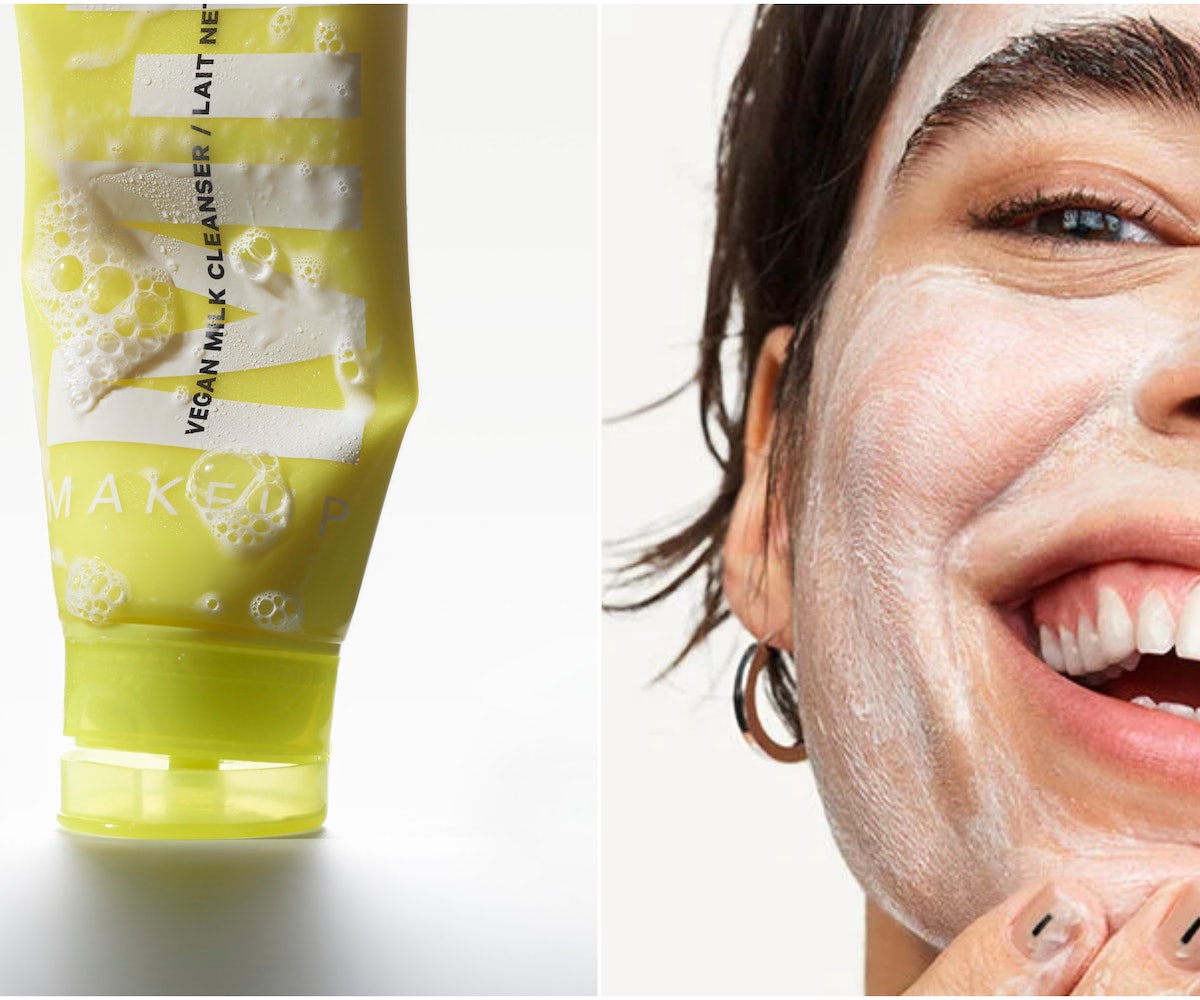 If the neon packaging, high-shine pigments, and cyber-cool makeup looks are the first things that come to mind when you think of Milk Makeup, you wouldn't be alone. The brand has positioned itself as the free-spirited, rebellious, and 100 percent vegan alternative to the Glossier's of the world since its 2016 debut, largely due its color cosmetic and makeup offerings. But the brand makes good skin care, too, and today it pushes even further into the category with the launch of Milk Makeup's Vegan Milk Cleanser — its first-ever traditional version of the product to hit the market.

Available for $30, the four ounce, translucent yellow tube and the milky, gel-cream inside it, was formulated to be a gentle albeit effective go-to, making all of the typical promises — like that it'll wash away dirt, makeup, and impurities, and do so without stripping the skin. It's packed with an antioxidant-rich blend of argan milk, grape-seed oil, and olive-derived squalene to seal in moisture, as well as fig milk, shea butter, and oat milk to soften and comfort. The hero ingredient, desert milk, is proprietary to the brand — infused with Kalahari melon, baobab, jojoba, and aloe vera, all of which thrive in desert climates thanks to their water-storing abilities, that make for a hydration all-star in a cleanser. According to the brand, it's ideal for dry-to-normal skin types, and especially those with sensitive skin.

Nearly an identical ingredient list can be found in the brand's newly-launched Vegan Milk Moisturizer ($38), which debuted back in January; much like the cleanser, it's the brand's first traditional offering in the category. (Cleansers and moisturizers have been a part of Milk Makeup's lineup only in stick form previously.) According to Milk Makeup co-founder and COO Dianna Ruth, who oversees all of the product development for the brand, both products were the result of community feedback.

"We just felt, about a year and a half ago, that we didn't really have a basic moisturizer," Ruth tells NYLON. "It was something we felt like we all needed in our routine." Interested to see if a traditional, milky, lathering cleanser was even of interest to the brand's consumers, the web and social teams ran surveys on their respective channels, offering what Ruth called surprising new information. "They all were coming back saying that their skin was sensitive, and that they wanted something new. I was so surprised reading this data because you know, you wonder how or why sensitive skin is a trend." The team found consumers' skin was becoming more and more sensitive as a result of a few things, like over-cleansing, using harsh products too often, and the usual culprits like stress and travel. "That was the culture we were seeing form in our community."

Around the same time, Ruth was also noticing the rise of milk alternatives, sharing that even at her office at Milk Studios, the coffee bar had suddenly switched to only oat milk and almond milk. She applied the trend — brewing in the food-world for years — to the brand's formulation process for both the Vegan Milk Moisturizer and Vegan Milk Cleanser.

The final result is two sensitive-skin approved products that fall in line with the rise of not only milk alternatives and more gentle formulations for the products consumers are putting on their bodies, but the stark data that concludes skin-care is far outpacing the growth of color cosmetics today. According to Ruth, the brand will move through 2020 keeping both major categories a priority, with complexion and color launches in the pipeline, along with a "unique" body product slated to launch before summer.

"We always think of ourselves as a lifestyle brand," says Ruth. "Anything you would ever want to have in your bag, be it a cleanser or moisturizer, we always want to be open to offering those products."