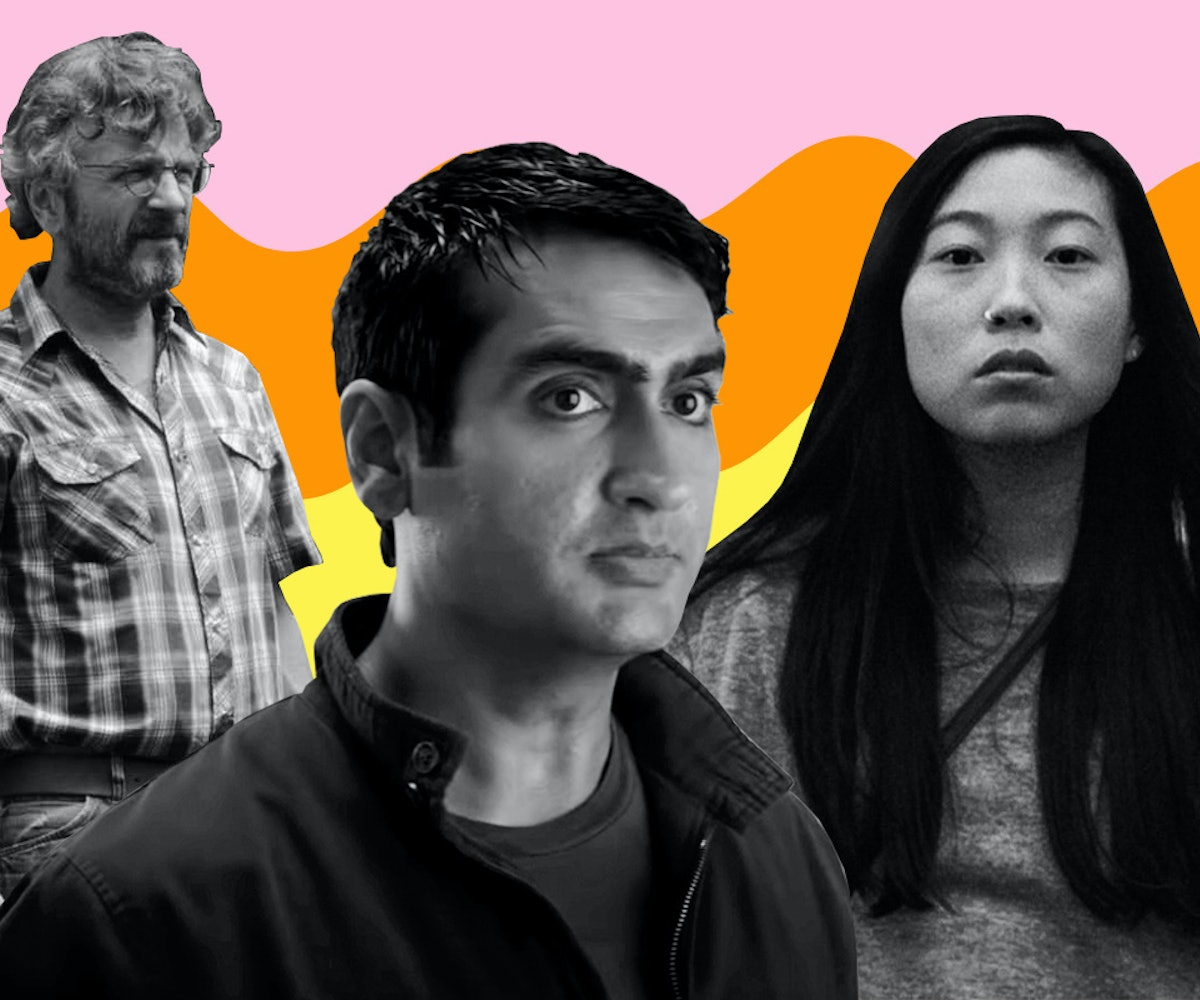 Comic performers branching out into other roles has been a staple of the movies for decades and decades. Will Ferrell has done Raymond Carver, Eddie Murphy has played action hero, and the last really good Mike Myers performance was in a Quentin Tarantino movie. But with a vastly increased number of entertainment outlets, the process seems to be speeding along faster than ever, with no fewer than three comedians trying out new gigs this weekend at the movies. Kumail Nanjiani, the stand-up and Silicon Valley star who broke out with The Big Sick, jumps to broad action-comedy with Stuber; Crazy Rich Asians and Ocean's 8 scene-stealer Awkwafina gets a dramedy vehicle called The Farewell; and stand-up comic, podcaster, and TV actor Marc Maron stars in Lynn Shelton's Sword of Trust. All of these people are well-known, but none are as famous as, say, Jim Carrey when he did The Truman Show and Man on the Moon. In fact, only Nanjiani has previously front-and-center starred in a movie at all.

Oddly, Nanjiani is both the most established movie star of the bunch and also the one taking the fewest risks with Stuber. Conceptually, it's worlds away from The Big Sick, where Nanjiani played a fictional version of himself that shared his real name, his stand-up career, and some details from his real-life relationship with his now-wife. Stuber is high-concept so pure that it hasn't even bothered to include a second high-concept hook in its ads, which focus on Stu (Nanjiani), a mild-mannered Uber driver (hence the portmanteau title) whose car is highjacked by a tough cop (Dave Bautista). The ads don't mention the reason the cop commandeers the car in the first place: He's just had laser eye surgery and doesn't want his temporary impairment to screw up the opportunity to avenge his fallen partner.

Stuber is very different, then, from the Judd Apatow-ish rhythms of The Big Sick, which Nanjiani also co-wrote. The new movie is punchy in both senses of the word, over in about 90 minutes, and full of violent slapstick (and also some plain old regular violence). Nanjiani's comic style—a pragmatic mixture of fussy neuroses and deadpan wisecracks—enlivens the buddy-comedy formula to a degree, but it's most striking to see how similar he is, despite the hail of broken glass and bullets, right down to the fact that he also played a part-time Uber driver in The Big Sick. As in that movie, his driving provides supplemental income as his character dithers about how to more proactively live his career dreams.

Stuber, directed in kind of an energetic smash-and-grab muddle by Michael Dowse, is amusing enough, and souping up an indie star with unnecessary firepower is a pretty standard move. What makes the movie a strange experience is how it appears to have been backward-engineered from the dramedy departure that Nanjiani happened to have made first. Rather than peeling back the Hollywood artifice from a movie like Stuber to arrive at something more grounded like The Big Sick, Nanjiani's nerdy, fumbling, Uber-driving persona gets blown up bigger and broader, with jokes about wokeness and gig-economy hustle to try to keep it real. That instinct nags at the movie without taking it over; Stuber keeps threatening to turn into a stranger, more idiosyncratic comedy, one with more time for its sometimes-open-hearted supporting-cast detours (Stu has a cute heart-to-heart with a male stripper) and unusual pop-song choices (as is, the music cues almost sound like semi-hipster temp tracks). Over and over, it approaches eccentricity and then runs away screaming.

By excising Nanjiani's stand-up act from this new narrative and adding in a bunch of shoot-outs, Stuber toys with his biography; it's obviously a big, loud, action-comedy vehicle, but it also imagines a version of its star who doesn't have the artistic outlet of a stand-up career. That sense of a comic playing an alternate-history version of himself powers Sword of Trust, in which Marc Maron is not a popular garage podcaster but Mel, the proprietor of a pawn shop in the South. The movie hints at his backstory early on, both as a focus for big scenes (an ex-girlfriend comes around looking for some financial help) and as background details (Mel idly noodles around on a pawned guitar). Eventually, a fuller picture emerges of Mel as a musician who never made it. It's probably not a coincidence that Maron himself found his biggest successes later in life—or that he composes some guitar music for the film's soundtrack.

These details emerge from a seemingly unrelated narrative framework: Mel and his employee/sidekick Nathaniel (Jon Bass) are approached by Cynthia (Jillian Bell) and Mary (Michaela Watkins), a couple who has recently inherited a Civil War-era sword from Cynthia's grandfather. The sword is purported, by some questionable "authenticating" documents as well as some even more questionable YouTube videos, to serve as proof that the South really won the Civil War. None of the main characters believes this hokum (though Cynthia and Mary initially make a go of it, to goose the asking price). Some local racist kooks, however, are open to the possibility, so the quartet agrees to facilitate a sale and split the proceeds.

Sword of Trust is both au courant, with its mind on mindless conspiracy theories, and a little old-fashioned; it's the kind of modest comedy a more attuned Woody Allen might have made, complete with Maron huffing and sighing as he both perpetuates and rolls his eyes at a crazy plan. The way Shelton brings in Mel's emotional baggage is not always graceful; she's known for using improvisation in her comedies, and his backstory feels like a parcel of material she has to definitively set down someplace in her loose, pleasantly shambling caper. Still, Maron is affecting; it's an instance where a comedian playing around with a life he might have led instead conveys a genuine sense of melancholy, rather than a kind of downmarket dress-up.

The Farewell is not explicitly autobiographical for the Asian-American comedy rapper-turned-movie star Awkwafina; rather, it takes plenty of details, and even some real-life relatives repurposed as actors, from the life of writer-director Lulu Wang. Her stand-in is Billi (Awkwafina), a Chinese-American woman floundering through a semi-independent life in New York City, occasionally stopping home to do laundry and visit her parents (Diana Lin and Tzi Ma). When her parents head back to China ostensibly for Billi's cousin's wedding, Billi learns that the real reason for their trip is her grandmother (Zhao Shuzhen), called Nai Nai. Nai Nai has been diagnosed with late-stage lung cancer, but "everyone decided," as Billi's mom puts it, to keep this information from her, and use the wedding as a pretext for saying their goodbyes—even if Nai Nai may not realize they're being said.

This lie understandably appalls Billi, who insists on coming along despite her mother's concerns that she'll give away the secret. Refreshingly, this isn't exactly a movie about an assimilated American (Billi was born in China but emigrated at a young age) rediscovering lost family; the movie's opening establishes that Billi and Nai Nai talk on the phone fairly regularly (and Wang captures details of both their lives just by clean, careful cutting between the two sides of their conversation). If anything, the big lie shows Billi just how big a cultural gap she's straddling.

Wang's film has a lovely mix of observational family comedy and contemplative drama. Sometimes she pushes a little too hard—not in her filmmaking, which further showcases that strong eye for detail, but in her writing, which involves several scenes where characters more or less discuss the themes of the movie, laying out the East-versus-West conflict of sensibilities that Billi is experiencing. But if Awkwafina has been perhaps slightly too often asked to stare forlornly or walk so that she might be photographed in slow-motion reflection, she's also the movie's secret weapon. "Secret" might seem like an odd word; she's the most U.S.-famous member of the cast, and she's known for comic brashness. In The Farewell, her occasional wisecracks are more natural, and her open face is a window to both the love and anxiety she feels about her big, half-foreign, half-familiar family. In movies like Crazy Rich Asians and Netflix's Dude, she's been a talker, with her distinctive, slightly gravelly voice taking on traces of blaccent. In The Farewell, she's remarkably assured in smaller moments; the more that Wang leaves unsaid, the more expressive she is.

It's a shame that the Hollywood economy is both expanding and contracting in a way that squeezes smaller-scale comedies out of the studio system—where a noisy picture like Stuber counts as summer counterprogramming. But maybe it's fine that Nanjiani, Maron, and Awkwafina don't have to labor in too many standard-issue broad comedies before branching out. Even in their most dramatic moments, there's an uncommon sense of calm in Sword of Trustand The Farewell—a sense that comedy-drama is where these performers can go for some peace and quiet.