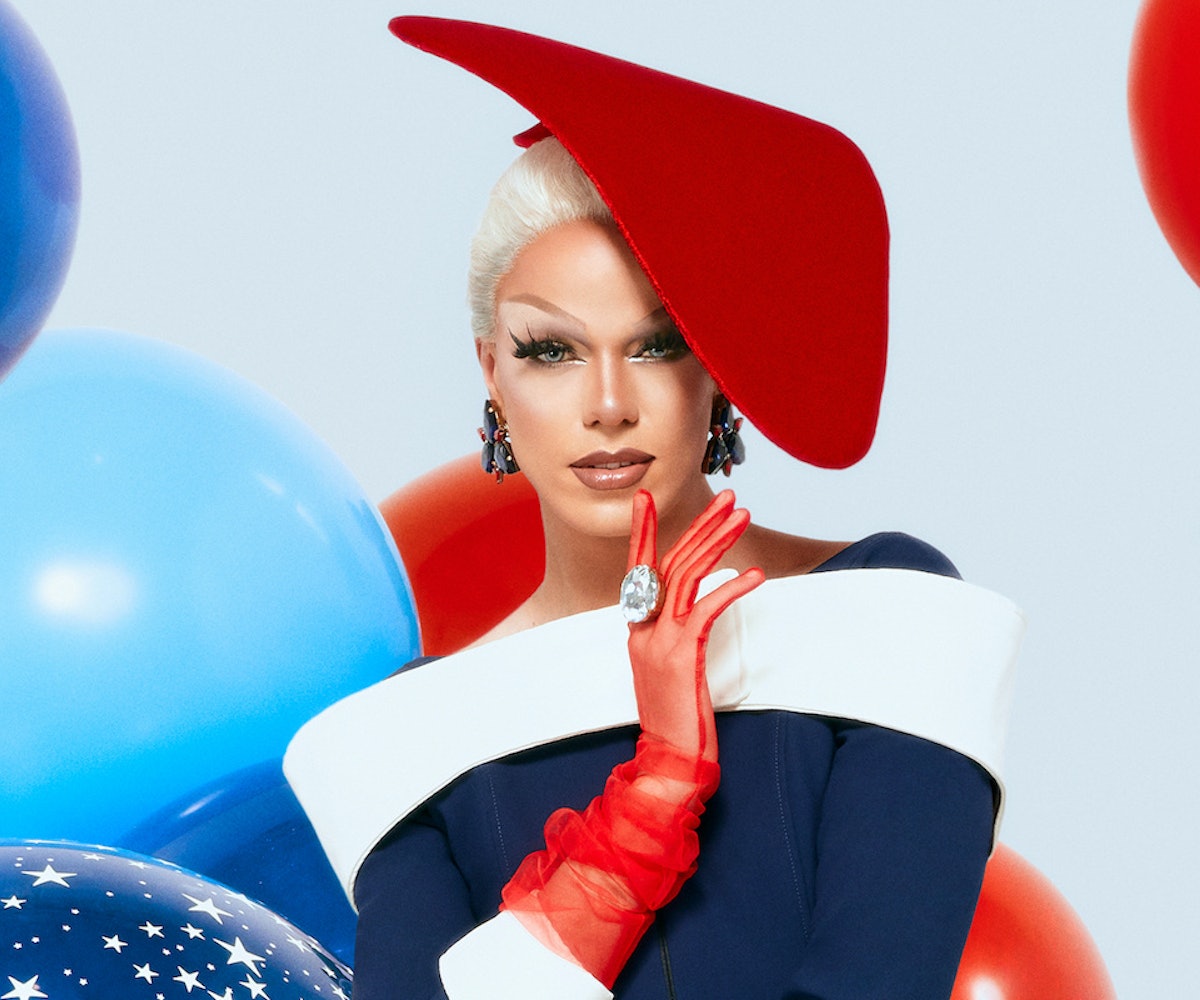 writer Michael Cuby will conduct an exit interview with the queen eliminated from RuPaul's Drag Race Season 12. This week, French queen Nicky Doll was asked to sashay away.

When it comes to being the "first," there can only be one — and luckily, Nicky Doll will always have that honor. After leaving France to follow her husband to America three years ago, the 28-year-old sashayed into the Werk Room as the first French queen to ever appear on RuPaul's Drag Race, a title she wore with all the pride of a freshly-baked baguette. Whether using her keen sense of style to constantly wow the judges on the Main Stage or injecting random French babblings into her attempts at improv, the queen did more than enough to make her country proud.

But being an international queen has its downsides as well — particularly when it comes to competing in challenges that require you to speak in a language that is not your own. Such complications befell Nicky Doll throughout her stint on the show, making it difficult to memorize lines, improvise, and, perhaps most importantly, show her personality to the judges, who frequently requested to see more than just the high-fashion glamazon she often showed them. During last week's "Gay's Anatomy" challenge, Nicky attempted to do just that, opting to play the Baby (the "goofiest role," in her opinion) in an effort to loosen up. Unfortunately, the decision came back to bite her when that goofiness failed to translate. When all was said and done, the fashionable queen landed in the bottom next to the feisty Heidi N. Closet, and after going head-to-head in a lip-sync to Kim Petras' "Heart to Break," the French beauty was sent home packing.

In the lead up to last week's episode, NYLON hopped on the phone with Nicky Doll to discuss her feelings about being Drag Race's first French queen, why she named herself when asked who should go home, how she felt lip-syncing for a second time, and what it was like to put Pete Davidson in drag for the instantly-iconic Saturday Night Live skit he did alongside RuPaul.

You're the first French queen to compete on Drag Race. How does it feel to have that title?

I am incredibly proud to be the first French queen on Drag Race because there's a lot of drag queens in France. I think being able to have my country benefit from the positive message of the show and being the person for it is an incredible opportunity. Also, because the show is so heavily infused with fashion, I think bringing a little French touch to it is what was needed.

What do you think went wrong in the "Gay's Anatomy" challenge?

First of all, this is an incredibly strong cast and I remember the judges saying that it was hard for them to decide who did worse because they were laughing at every single role that we did. So I think it was a little bit of a lack of luck. Of course, being the first French queen is a blessing because you get a lot of curiosity from the audience, but it also comes with a curse because English is not my first language. I think that for this type of setup on a show, you have to think quick and be witty and I think I could have delivered a little bit more of my personality if I had the language to help me. It's just an unlucky situation.

You won the mini challenge and had the choice to pick which character you wanted to play. Why did you settle on the baby, who was one of the only characters that had to do improv? Do you regret that decision now?

I think that I wanted to challenge myself because, clearly, I was hitting a wall with the judges even though all my sisters were seeing how goofy I am and how not convinced I am that I am the next Supermodel of the World. I thought I was challenging myself to really go outside of my comfort zone with the baby drag queen, who was really the goofiest role in the whole script. It was finally my way to paint differently, to stay out of beauty and fashion, and really bring them only personality. Yes, there was a part that was improv but I guess I just wanted to be original. I took a risk.

Once you arrive and walk into the Werk Room, you clearly realize why they call it the "Hunger Games of Drag."

Were you anticipating how difficult the language barrier would be ahead of time or did you only realize that after arriving on set?

I got ready for the show knowing that it would not only be a quiet river. I knew that sometimes I would be pushed and it would be hard to be at the same level as the other girls. But really, no queen in the world, even the ones that are the most famous outside of the Drag Race family, can be prepared for what Drag Race is. So as much as I tried to prepare myself for this show, once you arrive and walk into the Werk Room, you clearly realize why they call it the "Hunger Games of Drag," it is the Hunger Games of Drag.

The problem that I had was about the language, but I think also I was not ready with my inner-confidence. When you go on the show, you need to have an unshakeable confidence to be able to go further, and once I realized that I was struggling with the language, my confidence started to shatter. And once your confidence starts to shatter, you just have a downfall from there. So I think that I was ready but was not as ready as I should have been. But I'm ready now! If there's one thing you learn once you rewatch yourself — if you're actually honest with yourself — you should learn from yourself and you should understand the judges' point of view. If you were to put me back now seeing what I saw, I would have been able to crush it — because I realize that, yes, I have a language barrier, but the biggest issue I had there was my confidence was shattered. If you don't really know how to speak English, you can find ways to still make it work. Now, after watching myself, I know for a fact that I could have.

There's the point after the critiques when Ru asks all the queens to name who they think should go home and everyone except Jaida names you, and then you also name yourself. Why did you throw yourself under the bus?

When Heidi was named by Jaida, I was still thinking that my performance and my outfit on the runway would be able to save me. But when Brita made the decision to say my name and I started to see everyone to my left piling on me, at some point, I was like, "There's no point of hiding." I don't have the nerve — and nerve is part of the charisma, uniqueness, nerve, and talent you need to have. So if my nerve started to downfall, there was no point in staying. So I decided to stop because I also believed that I could have delivered a little more. I was like, "You know what? Let me just stop here, leave on a good note, and come back if I ever have the chance to come back and really show who Nicky Doll is and not just be 50% of who I am."

Also, unless people really are on that stage and have heard other people saying their name… people say that lip-syncing for your life is one of the hardest things in Drag Race. I think having three or four drag queens all say your name is probably just as hard. It was tough. After hearing everyone say they think I should go home, I was like, well, maybe I should… But maybe I should have just stuck to Heidi.

This was your second time lip-syncing. Did it feel any different doing it this time?

So let me set the record clear. The first time that I did the lip-sync against Dahlia, I was probably wearing the most uncomfortable outfit I have ever worn in my entire life. So when I was lip-syncing against Heidi, I knew that I was lip-syncing against a storm because that girl has no freaking bones — she can flip like nobody's business. So I knew that she was going to pull all the drag shenanigans that I can't, but at least I was comfortable. I already had said my name so I was like, if I'm leaving or not, at least I can have fun one last time. The person you were seeing there was probably stressed but she was having a blast. I was happy to lip-sync.

The judges kept telling you that they wanted to see more personality. Do you think you were able to show that off before leaving or do you wish you had more time?

I think that the saddest part of my whole trajectory on the show was that I managed to show my personality to the whole world, but I didn't get to show it to the four people on the judges' panel. As a viewer, I hope it's true that when you watch me in the Werk Room interacting with the girls, you can really see that I'm not that pretty queen. Yes, I love pretty things and shiny things, but at the end of the day, I'm also a man in a dress, tucked, with pads, glue around his hairline to make sure the wig stays on, so I don't take myself too seriously. And again, if this was in my own language, you'd see how goofy I really am. I think I did deliver it, but just not to them.

I heard that RuPaul hired you specifically to do Pete Davidson's makeup during his SNL hosting gig. What was that experience like?

It was an amazing experience. First of all, it was great validation. At the end of the day, when we all call her Mama Ru, it is truly our mother. So when you receive a call saying RuPaul wants you, specifically, to come and paint Pete Davidson for his skit for SNL, you feel incredibly proud and validated. Also, I got to spend a whole afternoon with RuPaul in full drag. I was able to share a normal conversation with her. She gave me a lot of very useful advice to handle this new life of mine and it was great. I'm so proud because it was such a historic moment to have RuPaul on SNL and being even remotely involved with it was such an accomplishment for me.

Did getting that validation help you put into perspective what your life post-Drag Race could be?

Yes, absolutely. I think having this experience with her really opened my eyes. First of all, it helped cure six months of therapy that I needed after realizing that I lost. So the fact that she validated me was like, oh well, there's that at least! And just being able to keep improving, working hard, and not stay in a negative mindset, it was very therapeutic, for sure.

Which challenge are you most upset you didn't get to compete in?