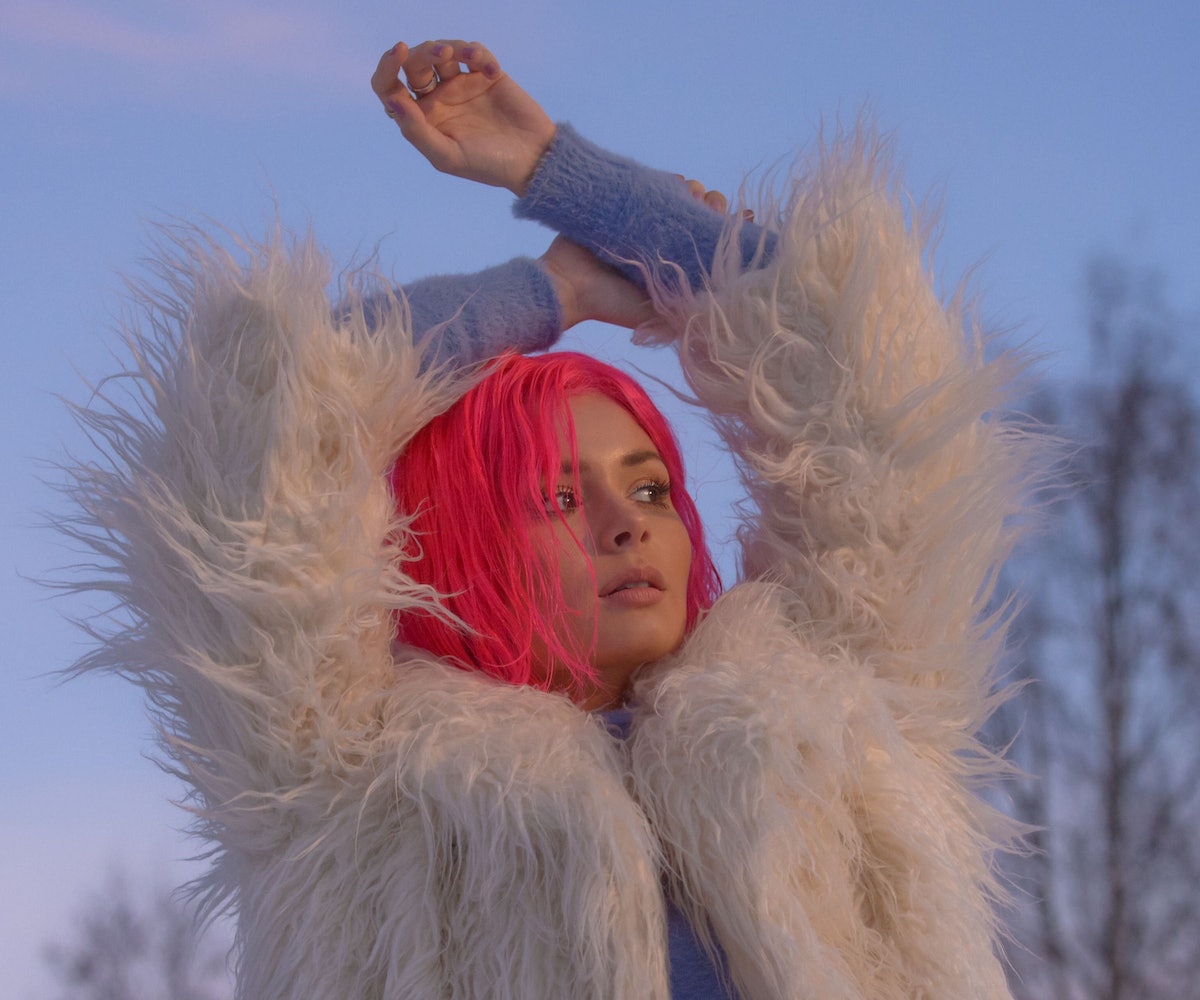 When Nina Nesbitt was having trouble finding her own voice, she imagined giving it to other artists, and, soon enough, the songs came pouring out.

The Sun Will Come Up, The Seasons Will Change, her U.S. debut, encapsulates Nesbitt's artistic frustrations, as well as the general woes of being in your 20s, into a neat package that shows Nesbitt is ready for a fresh start. Ahead of the release of her album, Nesbitt talked about how she feels about putting it out into the world, her continued love for women songwriters, and the intimacy of writing songs alone in your bedroom only to soon see them released into the world.

Read our full conversation with Nesbitt, just prior to the release of The Sun Will Come Up, The Seasons Will Change, below.

How do you feel about finally putting out this album?

I'm really excited. It's been five years, almost to the date, since the last one, and the last one never got released in America so this is my international debut. I would normally be nervous but I think we've had five tracks so far and they've all had such good reactions on Spotify and such, so I guess a little bit of a weight has been taken off my shoulders in that sense. The label said, "Oh, we've had over 150 million streams already." Which is beyond whatever I thought the album would even get. I just want to get it out, and I guess people have gotten to know the singles, but I want people to get to know me as an artist. The singles have been on the popular side, but there are tracks on there that are a lot more sort of emotional. Not that the singles aren't, but I think it gives you a better idea of who I am as an artist and stuff and people get more of a chance to relate to that.

Speaking of Spotify, what's it like working with them?

They're like, "Just give us the music." They don't get involved creatively. But I think I just had a close relationship [with Spotify] from day one. I went to an artist masterclass like a year and a half ago because I didn't know anything about streaming platforms. I'd been an artist since I was 17 and I was used to just putting things on iTunes. So I was like, I need to educate myself and figure out the new industry.

I went to the masterclass and I just went up to them after and told them, "I have a single coming out tomorrow, I'd love your feedback. I'm interested to know more about how things work with streaming." And then the next day it was like the Top 10 on New Music Friday. And then "The Best You Had" came out after that, and that has like 50 million streams now. They've just been so supportive from day one, and I think they just really connect with artists who know what they are and know what they want and have their own creative plan rather than a huge label turning up and being like, "This is what's happening by the way."

You've said before that this album is a proper journey that you take the listener on. I'm curious as to sort of what the through-line is, what the bigger story is that you're telling.

It's not track-by-track, exactly. It's more of a general feeling from start to finish. It starts with a song called "Sacred," which is when I'd just been shelved at a record label, and I'd just been writing all these songs the whole time and handing them in and having people be like, "Oh, that's cool." And no one was really excited about anything or making plans. I kind of felt like I was sat in musical purgatory. I lost my confidence 'cause I thought I mustn't be very good if no one wants to put it out and started making music for the wrong reasons, just trying to please people. I just started drinking all the time, partying, not really focusing on my career.

And then when I got dropped, it was a major wake-up call. It was like, Who am I? What do I want from life? What kind of music do I want to make? So I kind of just figured that out and the album has been that vessel for me to get into and work on every day and get myself out of quite a shitty place and come out the other end.

Obviously that's very specific to me, but I think I've left it open enough that people can relate it to their own life. I think it's a journey of moving from adolescence into your early 20s and figuring out who you are and what you want. Also, it covers loads of different topics like relationships, friendships, my friend having a baby, and just realizing we're all going down a different path... It's kind of an open diary of someone in their early 20s just trying to figure the world out.

What does your songwriting process look like, especially on this record?

I wrote a lot of this record on my own. When I wasn't signed, people didn't really want to work on the artist's project because people want to have big cuts or whatever so I just started songwriting for other people which I really enjoyed.

So, a song like "Somebody Special" or "Loyal to Me", they came to me imagining I was writing for other artists. "Loyal to Me" had kind of imagined a girl band singing, like Little Mix or something, that's why it has all the harmonies. For "Somebody Special," I was thinking about someone like Selena Gomez, that pop vocal. I started getting cuts of people like Jessie Ware, Olivia Holt in the U.S. I actually loved that, it helped me get out of my own head.

I was never thinking, Oh I'm writing for me when I was doing those songs, so I just wanted to write the best song possible, and I think that really helped. Then when I was writing alone, I'd just be in my bedroom in London and I had a little studio setup. I was like, You know what, if no one's gonna produce my music, I'm gonna have to learn how to do it myself. So "The Moments I'm Missing," I produced that myself in my bedroom. The vocals you hear are literally me sitting on my bed with a microphone. It was really empowering and liberating to be able to just sit in my bedroom in literally my pants or pajamas and make music that I wanted to make. Then songs like "Empire," "The Sun Will Come Up," "Sacred," "Things I Say When You Sleep," I wrote them in my bedroom and then brought them into studio sessions to produce up. It was a mixture of things. Two different styles of writing, some in my room which were really personal songs. And then others were thinking about other people.

Do you usually like to turn to real-life stories to get those ideas? Or do you like turning to fictional ideas?

A lot of the songs on there are really personal. So "Chloe," "Empire," "Sacred," "Things I Say When You Sleep," the more chilled-out ones, are more personal. And then there's the other part of me where, I have a lot of close girlfriends who are single, and I had a period where I was single and going out, so I think I definitely have a lot of inspiration to draw from, whether it be from my friends or past experiences. A song like "The Best You Had," that was written about a friend's situation which I find equally inspiring.

A lot of people think I've just had really shit times with relationships, and I'm like, "No, it's not me, it's my friend." But "Is It Really Me You're Missing," that was inspired by a Whitney Houston song called "Just the Lonely Talking Again." I heard that song and wanted to write my own version.

I know you've talked previously about how you're drawn to strong women who write their own songs, and I get why you as a feminist music listener, but I'm sort of curious, from a songwriter's experience, what draws you to them about their craft.

I think it's just relatable for me. Obviously growing up, as a woman around the music industry or interested in it, I think I've always related to them and had a connection with their music more than a guy. Because I think when I was young, I heard Britney Spears, Christina Aguilera, that sort of artist, and with that, the guy writes or produces and the girl sings, that's what happens. But then as I got older, I got to know all these amazing artists like Alanis Morissette, Stevie Nicks, Debbie Harry, all these women who are really the creators behind who they are. I was like, That's what I want to do. I'm not a good dancer, I'm not a natural performer. So what comes naturally to me is writing lyrics and writing songs and telling stories. And I think especially Alanis Morissette, I thought, She gets me. I got inspired by that. Then when I was 15 I heard Fearless by Taylor Swift, and I was like, Wow that's speaking to me.

I think why I'm so drawn to other female artists is because I know what they've had to go through to be taken seriously. Because I feel like when you start off, especially when you're young, a lot of people just think, Oh she doesn't actually write, she must just sing or, Oh there's a big old white man sitting behind a record label. Nothing against those guys because some of them are great at what they do but, no, a woman can actually come up with these ideas herself and the visuals and the music and her personality. That's why I really love artists like Lana Del Rey, I think she's really done that so well and so many people are like, "Oh it's just created by a label." No, it's her. It's her. You can tell that as well. I just have massive respect for anyone who's carved their own sort of space in the female pop world because I know how hard it is to get through those obstacles.

Who are newer artists that you've been listening to a lot lately?

I've been listening to a lot of Phoebe Bridgers. I absolutely love Stranger in the Alps, I absolutely love it. I love how it's kind of different than what a lot of girls are doing at the moment. I think it's really interesting. I listen to a lot of Chet Baker who is a jazz artist, I think he's from the '50s. He's a trumpet player and a jazz artist and he had a really dark life. His songs are just so relaxing, and I'm constantly surrounded by pop music so that's a really good one and it's also one that a lot of people don't really know. I really like Alec Benjamin, I'm really happy he's starting to break through. I love Rosalía as well. I recently found her. She's a Latin-American artist, and it's actually all in Spanish. And she's actually the first artist I've listened to that isn't singing in English that I've really felt I could really sit and listen to this. For some reason I feel really connected to this.