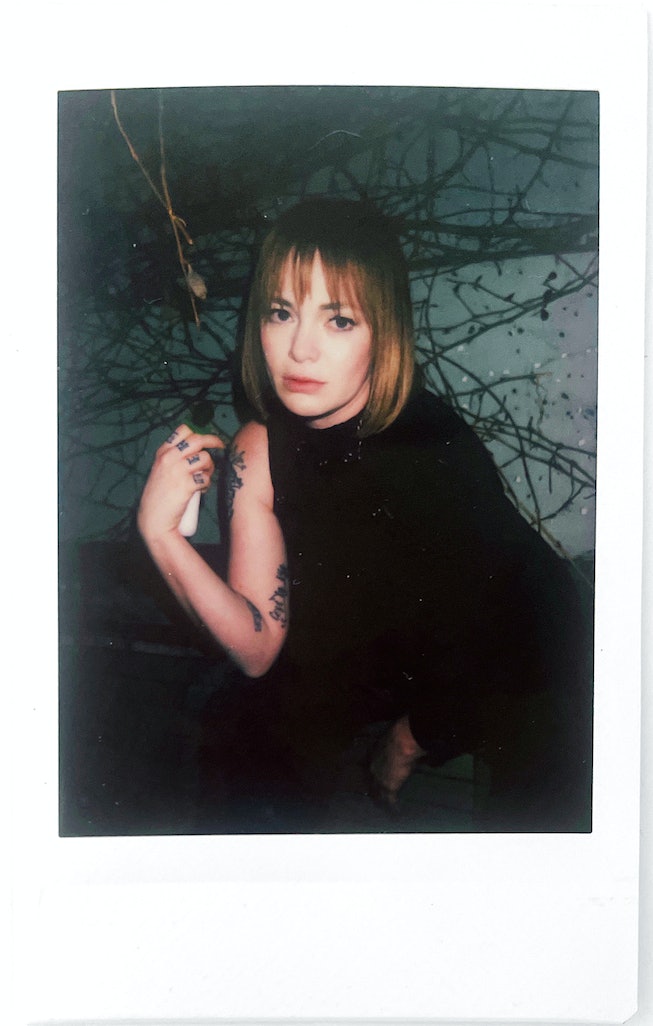 As soon as I get to the door of Tenants of the Trees, an infamous bar in Los Angeles’ Silver Lake neighborhood, I realize I’m not on the list. But when I tell the doorman I’m with Uffie, who’s deejaying inside, he unbuckles the velvet rope and ushers me in. “She’s a legend,” he says.

He’s right. Uffie’s first album, Sex Dreams & Denim Jeans, on which she apathetically rapped in a vague British accent over Paris-made party beats, set the tone for much of the music and style that is currently trending, even though it was released 12 years ago. Without Uffie, there might be no Kesha, no Charli XCX, and no poster girl for the bloghouse era that has recently been coined “indie sleaze.” But the man at the door isn’t reminiscing on the glory days of the Hype Machine — to him and the hundred people inside the bar, 34-year-old Anna-Catherine Hartley is a legend for different reasons.

Tonight, she’s playing a rare techno DJ set at underground after-hours party Lights Down Low, going on just hours before she flies to Paris to begin a European tour. Before heading to a downtown L.A. warehouse tonight, she’s volunteered to DJ a cocktail hour fundraiser for a local public elementary school. While not what I expected for the first stop on our night out together, it makes sense. Uffie is the mother of a 12-year-old girl and a 9-year-old-boy, and is friends with the mom who organized the event. Renowned party photographer The Cobrasnake snaps photos as parents and teachers dance to “TThhEe PPaARRtTYY,” her track with banger-makers Justice. For a minute, it feels like 2007 — but it’s not, and Uffie is glad. Instead of strolling down memory lane, she is much more interested in taking her fans somewhere new. She calls it the Sunshine Factory.

“The Sunshine Factory to me was an experience that I was fantasizing about,” she tells me over grilled octopus and a bottle of orange wine at a restaurant down the street from the fundraiser. The name came to her during the pandemic in a vision with the image of a gray rainbow. Initially, she wasn’t sure if it was a brand, a party, an album, or something else. So she started with an album, her first in 12 years, out on May 20 on Toro y Moi’s Company Records.

The pair met when Toro y Moi DMed Uffie from his personal account in 2018, telling her she was his favorite rapper. At first, she didn’t believe it; as far as anyone knew, she was retired. After the birth of her son in 2013, she quit music to focus on her family. “I had been hustling and touring since I was 16, and I just needed a break to learn to be a human. I feel like there’s this extension when you have a manager, business manager, all these things, you grow up really quickly but you don’t have to learn to do sh*t,” she recalls. She moved from Paris to Joshua Tree, where she lived out her desert mom dreams while studying biology at a local college and interning at a zoo.

A few years later, she got a divorce and moved to Seattle to be closer to her sister. Then, something happened she hadn’t expected or even thought she wanted. She was drawn back to music, moving with her two kids to Los Angeles, where she started to dip her toe in the world of songwriting, including co-writing Pink’s track “Hurts 2B Human” with Khalid. The work fit in well with motherhood, giving her the stability and schedule to stay close to her children. She could imagine doing it for the rest of her life, and that was the plan.

While fans reminisced and tweeted that they missed her, there was no label hounding her for a new record, no industry-machine with a plan on how and why to make a comeback. That’s how she knew she really missed making music as Uffie. She self-released her EP Tokyo Love Hotel in 2019, pivoting to sugary autotuned pop vocals with lyrics focusing on the dark side of the party, rather than cutting the VIP line with her friends.

The same thing happened with Sunshine Factory, which she initially planned to self-release before Toro y Moi offered to put it out on his label. “There were no expectations; nobody knew I was making a record, and it was just pure freedom. It gave me the confidence that if I don’t like this, nobody has to hear it. That gave me self-camaraderie and bravery,” she says. She made the album in two weeks at an Airbnb in Portugal — one of the only locations she could legally travel during lockdown — with Lokyo, a bassist and music producer she’d met in a random studio session. That meeting resulted in the song “Cool,” her favorite since “Pop the Glock,” the first song she ever wrote. At the time, she had no idea “Cool” would be the first single off her next album, she just knew it was something special. “I wanted [the record] to be a cinematic, sonic version of the night I was missing and the community that I wanted to be around,,” she says. During the pandemic, Uffie was struggling with her mental health and wanting to transport herself somewhere else. She missed the concrete walls of Berlin superclub Berghain, but also fantasized about being immersed in a lush green forest. “Sunshine Factory popped into my head and I was like, ‘That’s where I want to be, that can be all of it,’” she explains. And it is; Sunshine Factory has groovy basslines, indie pop sing-alongs, Southern California ska, and rave anthems — in fact, there’s hardly any rapping at all.

Sunshine Factory takes listeners through the experience of a night out at Uffie’s fantastical club. After walking in and drinking, dancing, and taking the mind-altering substance of your choice, the inevitable comedown ensues, followed by getting home and falling into the arms of your lover. She was inspired by the theatrics of drag queens and their commitment to bringing people joy and providing an experience with their art. Between tracks, she’s placed interludes from her friends: electroclash legend Peaches, Drag Race queen Ilona Verley, and musician Teddy Geiger. “I wanted to add to the experience of being in the club, so they’re supposed to be voice notes you’re receiving,” she explains.

The album is a big departure from the nonstop-touring, Pharrell-collaborating experience she had with her debut album on Ed Banger Records in Paris. Uffie has reemerged into a new landscape with new priorities. She’s not an apathetic club demon, and she isn’t part of a French DJ supercrew — she’s a mom who lives in suburban L.A. who picks and chooses which parties are worthwhile. Even if it feels perfectly timed, she had no intentions of coming back in the thick of a nostalgia for her early days. “I’m really getting frustrated with being associated with bloghouse. Every f*cking article is like ‘bloghouse queen.’ I know that’s where I started and I know I took a break, but I am putting out substantial work with dope people — let’s focus on that,” she says, puffing a vape as we finish off the wine.

Though she’s proud of the work, she’s anxious about the release. She initially became a rapper almost by accident, when producer Feadz asked her to write lyrics for a song and she rapped because she wasn’t a strong singer. But everything she’s doing now is intentional.. “I have really crippling social anxiety. I’m waking up at 6 a.m. and taking care of kids and doing all these things, and I don’t have the same confidence as I did before. I don’t know if that’s age or humbleness or just being human, but I don’t have the ignorance that protected me then,” she says.

While tonight might not be a night at the Sunshine Factory, it’s a journey nonetheless. Since emerging from her hiatus, Uffie has performed at throwback nights and fashionable queer parties, but she admits to being a little nervous about tonight’s DJ set. “I’ve just heard that people there don’t give a sh*t who you are, they just want good music to dance to. That’s such a flex to have as a party,” she says. As someone who’s been partying around the world since she was 15, she holds DJs to a special standard, reminiscing on when they would actually slow the BPM with their fingers. That night at Lights Down Low, Uffie encounters a bit of USB drama at the beginning of her set, but it doesn’t stop her. The all-black-wearing front row dances along, and like she suspected, they don’t care if she’s a rapper, a former Internet “It” girl, or whoever she is. She’s got more orange wine in a red bucket full of ice on the floor behind the DJ booth, and her longtime friend Spank Rock shows up to dance on the sidelines. It’s rumored a guy she went on a first date with that afternoon might stop by, too, but she assures me she needs to get home and pack for tour as soon as the party’s over.

On “Where Does the Party Go?” — one of the singles off Sunshine Factory — she answers her own question, singing that it “never ends.” But this night — or technically, morning — for at least a few hours, she’ll have a moment before the next one begins.

NEXT UP
A Night Out
A Night Out With Rachel Bilson
Nylon Nights
Latto Gets Ready for Spotify’s Best New Artist Grammys Party
Culture
Caroline Polachek In KNWLS & More Party Photos You Missed
Nylon Nights
How Renzo Rosso Turned The Pelican Hotel Into A Miami Must-Stay
Style + Culture, delivered straight to your inbox.