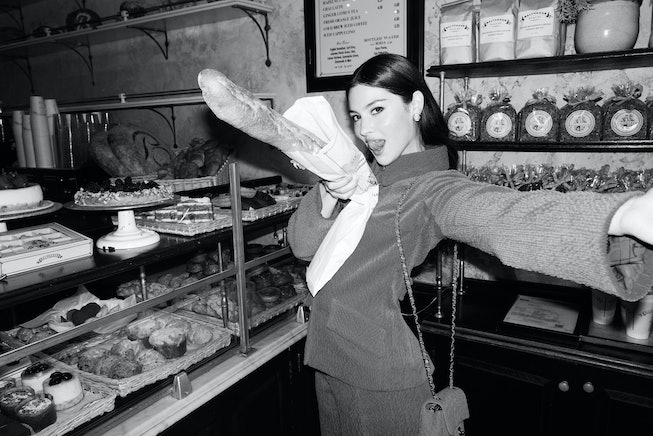 Monday night in New York City was sweltering. At 7 p.m., it was still a blistering 85 degrees, and the Lower East Side was filled with people wandering the streets in sundresses and micro shorts. Then there was Gracie Abrams, emerging from her apartment in a full fuchsia velvet suit. A little weather inappropriate, perhaps, but for good reason: it was Chanel.

“I’m so honored,” the 22-year-old says once situated under her car’s vent that is blasting AC, glancing down at her look for the night. “Anything related to Chanel, I’ll be there.” Tonight was one such occasion: the Tribeca Festival Artists Dinner, hosted by the French fashion house. It was the 15th year for the event, and Abrams’ first. The singer had just returned to town from tour, so tonight was something of a reunion, as well, and a chance to catch up with friends — albeit in very fancy clothes and amongst Robert DeNiro, who made his usual appearance. Her date for the evening was close friend and fellow musician Diva Smith. “Diana Silvers is an old friend, and I know Clairo,” Abrams notes. “And Sadie Sink, I know is going to be there.” I mention that I’d just seen Sink make a surprise appearance at Taylor Swift’s Tribeca Talk this past weekend. “How was it?” she asks. “I was talking to her last week, because I knew that she was going to be here, but I didn't know what exactly she was doing.”

Swift is just one of the dozens of musicians who have proclaimed their admiration for Abrams. Over the past few months, she’s headlined a sold-out tour and opened for Olivia Rodrigo on her SOUR tour; this weekend, she’ll play Pharrell’s Something In the Water festival in Washington, DC, and later this summer hit Lollapalooza — all before releasing her first album. That, she promises, is coming soon. “I'm going to be [in New York] a ton this summer because I work upstate with Aaron [Dessner], so I just want to be as close by as possible, and bothering him all the time. We're wrapping up the album right now,” she says. Finishing the album, she notes, has been much harder than starting it, but the time is approaching. “The process for finishing songs for us is so quick. We spend, typically, no more than even the full day on one song,” she says. “I think it's one of the reasons why I love it so much. It is such a present thing and he's just an expert.”

Spending the past few months on tour have also changed the way she’s envisioned the record. “I think it's interesting, the way that environment affects writing — especially when that environment changes as much as it did [for me],” she says. “The past six months, I noticed it more acutely than I had before. I think also living with six people on a bus, you can't just start writing in the same way. I definitely started writing a lot more poetry, which I used to do when I was younger. But I took a big break, especially during quarantine, because I was alone all the time and had access to my guitar 24/7, and kind of resorted to more typical songwriting. It's been amazing to have a shift kind of forced upon you… I’m trying to think less hard about the writing.”

It’s also changed who she is as a performer, partly due to sheer exhaustion. “I've had shows that I'm thinking about X, Y, and Z when I'm up there, instead of being a 100 percent present and thinking about what the song is even about sometimes. But as I got more tired, I was forced to be more present.” The rare experience of touring with a peer was transformative, too. “Watching Olivia give her gift to everyone every night was such a blessing, but also to get to know her fan base was so cool. Because they are so passionate.”

“I feel incredibly grateful that I get to have had that experience,” she continues. “It was formative one in my adult life, and I think I just learned a ton, in ways that I could not have imagined. And it came at such an ideal time in my life that I feel, I don't know… I wish that everyone ever could go on tour. It just throws you head first into bizarre opportunities — especially as an introvert.”

As we pull up to Balthazar, she’s confronted by an introvert’s worst nightmare: the red carpet. Abrams, of course, handles it like a pro, before gamely being whisked away to shoot some campy photos with photographer Greg Williams inside the restaurant’s adjacent boulangerie. “I just full-on took a bite of coconut cake,” she reports, now safely inside and situated with Smith and a glass of Champagne near the bar. Soon, we’re joined by Clairo and Sink, just two of the many, many starry guests who quickly begin to fill the space. Among those who came out to celebrate the 2022 Artist Awards Program and honor the artists who have contributed original artwork to the festival’s award winning filmmakers (art, of course, has played a major part in Chanel’s history, harkening back to Gabriel Chanel’s love of the medium): Penelope Cruz, Evan Mock, Lucy Boynton, Chase Sui Wonders, Amandla Stenberg, Dianna Agron, Christy Turlington, and perhaps the most popular guest of the night, Andrew Garfield.

At dinner, a good portion of the main course of steak frites is dedicated to discussing who is going to see Phoebe Bridgers in town this week, and what night. (Abrams, who opened for Bridgers at Austin City Limits last year, says that she’s “going to flip” seeing the album live. “That whole night was just like an actual fever dream,” she says. “I was like, this is my idol.”) But as profiteroles are placed on the table, everyone gathers around Clairo’s seat, now joined by another pal of Abrams, Cazzie David. Dressed in various shades of Chanel, the conversation turns to an even more pressing question: where to now?

NEXT UP
A Night Out
A Night Out With Rachel Bilson
Culture
Caroline Polachek In KNWLS & More Party Photos You Missed
Nylon Nights
Latto Gets Ready for Spotify’s Best New Artist Grammys Party
Entertainment
Gracie Abrams & Gia Coppola On The Joy Of Free-Flowing Collaboration
Style + Culture, delivered straight to your inbox.