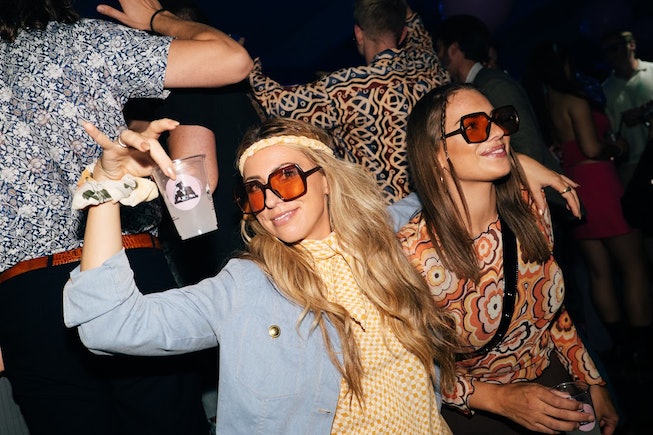 Welcome to NYLON’s Party Report Card, where we give you the Who, What, Where, Why and When on this week’s hottest parties — plus all the gossip you missed. It’s the inside scoop you need to feel like you were on the invite list. Sorry in advance for the FOMO.

WHO: About 1,2000 of Copenhagen’s tastemakers, longtime employees of the brand from around the world (including founder Kaspar Basse), and even some local juicers — and, for good measure, New York-based social influencer Serena Kerrigan.

WHY: To celebrate 20 years of the brand, which is basically the Starbucks of Copenhagen — and has taken it’s juices, coffees, and very good sandwiches global over the past two decades.

THE VIBE: Let’s start with the theme: it wasn’t ‘70s and it wasn’t Hollywood: it was Once Upon A Time... In Hollywoodland themed. This meant you were first greeted with a giant movie poster of the recent Tarantino film, with the Joe & the Juice logo superimposed over a taxi marquee, while the waitresses were dressed not as Sharon Tate, but as Margot Robbie as Sharon Tate. But just go with it — every single person in attendance did, and they had a great time doing it.

The venue was set up like the most lit high-school dance known to band — a large dancefloor between two sets of bleachers. But instead of spiked punch bowls, there was sparkler-adorned Champagne bottles (conservatively, one per guest) and Hollywood themed cocktails, including a Tarantino Tom Collins and Stuntman White Russian. It wasn’t your math teacher DJing, but founder Kaspar Basse rapping Charlie Puth’s “See You Again,” with lyrics changed to reflect the brand’s growth over the years and complete with pyrotechnics. Later, the band Tennis (not the early-aughts indie-pop duo, but rather an unrelated band dressed in ‘80s tennis uniforms) performed a set of popular party hits. “No one here is at the same party,” one guest laughed while taking in the diverse dance floor, where go-go dancers mingled with wild, Champagne-spraying revelers — and that was kind of the point. Especially because no matter what party you decided to join in, you were guaranteed a good time.