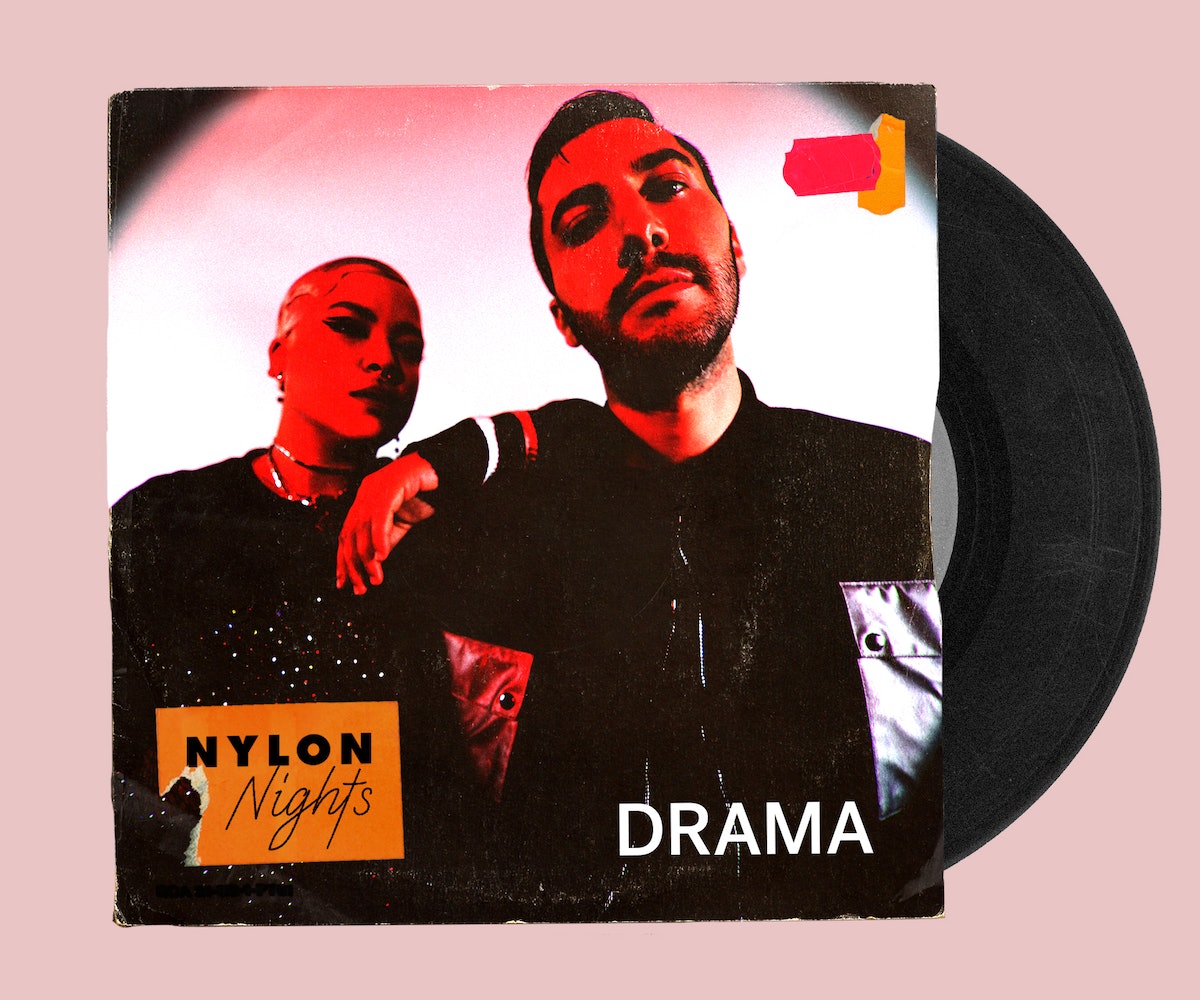 Going out? Need a playlist? Then NYLON’s NYLON Nights playlist is here for you. Each month we invite a guest artist to curate an exclusive playlist that will keep you going from pre- to post-game. This February, dark dance-pop duo DRAMA takes over.

Those in the know are already aware that DRAMA’s 2016 hit “Billy” pretty much redefined the rules of the heartbreak anthem. A pulsing, shadowy dance number, “Billy” is all about hearing through the grapevine that someone you might still love is now loving someone else, while all wrapped up in a silky sparkling sound that’ll compel you to dance whatever sadness arrives away. Of course, the happy-sad genre isn’t new, but DRAMA’s signature elixir is the most potent you’ll find of it.

Since that 2016 hit, DRAMA — producer Na’el Shehade and vocalist Via Rosa — has been pursuing that delicious mix of euphoria and tragedy to the barrel’s bottom, one that’s not emptying out anytime soon. It’s brought the two Chicagoans to festivals around the world — from Life Is Beautiful to Lollapalooza and Outside Lands — and helped them amass a cult following with monthly listens in the millions.

On Thursday, they released their latest single “3AM,” another groovy, house-leaning bop that lingers in the sweet-and-sour spot of anticipation, waiting for someone to make the first move. To mark the release, NYLON invited DRAMA to curate the February — what else? — NYLON nights playlist: a selection of songs for the eternal romantic, chronic relationship-jumper, dutiful follower of cupid and St. Valentine. Their picks form a hearty mix of their own irresistible anthems, lovesick soul from Lady Wray, and modern dance floor gems like Fred Again’s critically acclaimed “Marea (We’ve Lost Dancing).” It’s their ode to the perfect union between the club and tender hearts everywhere.

Dive in below, and read on for DRAMA’s thoughts on each of the songs.

We made this track one night on our way out the door. It started with a piano riff Na’el recorded into his iPhone. The whole song came together quite beautifully as if it was already written and we just kinda tapped into some force to deliver it sonically. Our process has always been very casual and “let’s try this” but this record really demonstrates how versatile we are and have always been.

This one will forever hold a special place in both of our hearts — it honestly took us both by surprise. One of the songs that started it all! “Billy” was inspired by that feeling of being in love with your best friend and finding out through the grapevine that he has a girlfriend.

That voice! Ay caramba! So good. So beautiful and nostalgic, but what makes this song extra special is the story. It’s unfortunately a common one. The vocabulary is so modern, the execution gives it such a specific visual, you can’t deny this kind of emotion. It’s not easy to naturally tap into this era of sound, it’s very refreshing to hear it done properly.

You might ask, “Why did you name it ‘Dark Rain’”? It’s probably the happiest song we’ve ever made, and to that I say, “Who wants to listen to a song called Bright Sunshine?” Although the title has nothing to do with the topic, it just kind of makes sense. Maybe it’s the chords, or maybe it’s the confusing chorus that almost feels like content with sadness, “Dark Rain” is a feel-good track unlike anything we’ve made.

One of our favorite jams. When we first started going on adventures together, this was the song — we have played it back-to-back-to-back many times. We 100 percent both agree that this is an example of the “perfect song” in the DRAMA dictionary of music. Everything about it feels right.

Fun fact: this song legit took years to make, a perfect example of “everything comes together when it’s supposed to.” Neither of us could finish it, but it kept coming back. We would find it again and again. It’s by far one of our favorite tracks on Dance Without Me.

Dodgr is the homie! This track is so magical, they never miss honestly. It’s so refreshing to hear well written pop music like this by people we know personally.

Love this girl, been watching her journey unfold for a couple years now. We’re rooting for her from across the pond. This song is so fun! It’s so confident and soft/precious at the same time. The original is amazing too but this remix definitely something we’d play at our DJ sets.

In 2020 we were writing songs with the intention of selling them. We made this originally for another artist but decided to finish it ourselves. It marks the beginning of a new era for DRAMA for sure. I think it set the tone for the rest of the project when it came to the depth and layers we wanted to play with.

This song is just absolutely amazing, we are suckers for a funky bass line and smooth keys! This song gives all of that and so much more, definitely a timeless jam made for any occasion. It’s that smooth, delicate, “I said what I said” energy.

Such a great track. Musically, there’s so little and so much going on at the same time, simple and complex all at once, and combined with the topic of the monologue? You’re pulled into this deep spell of overwhelming emotions. This song was made for the Melancholy Dance Floor, our favorite place to be.

This is one of our biggest records to date. We were introduced to Gorgon City in 2019 and made two records together, both of which made it onto their album Olympia. It’s always an exciting feeling when you make something with a complete stranger that just feels right and it connects with so many people. We’re honored to have been a part of their album.

Another DRAMA staple track, we love Duke (can we call him Duke?). Funky bass line, catchy hook, smooth transitions, space and room to breathe? I mean, it’s a banger. We play this a lot on the road and when we’re just chilling at the studio cleaning, can’t get enough.

A. We love Jimmy and Hugo, B. this song is so fun! Our managers set us up on a play date with these guys! We got some coffee, joked around, and just had a blast. It was just like back in the day when you show up at a new house you’ve never been to and just start playing with the other kids, this song is a direct reflection that lyrically for sure. It took us right out of our comfort zone, which is what the song is all about.

NEXT UP
Nylon Nights
Backstage with UNI and the Urchin’s Charlotte Kemp Muhl and Jack James Busa
Culture
Caroline Polachek In KNWLS & More Party Photos You Missed
Culture
On The List (With Melissa Rich): How To Throw The Ultimate Apartment Party
Nylon Nights
How Renzo Rosso Turned The Pelican Hotel Into A Miami Must-Stay
Style + Culture, delivered straight to your inbox.