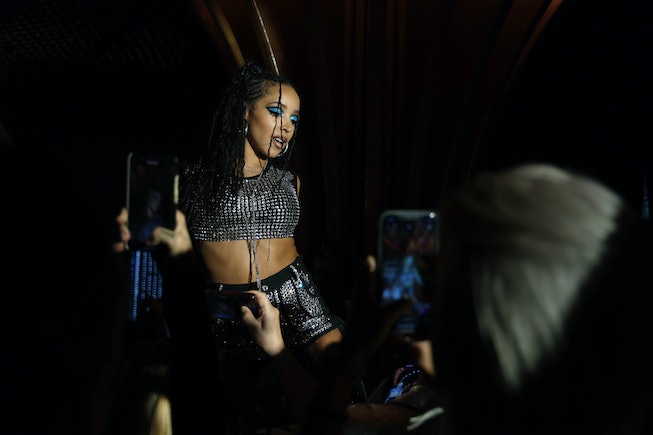 WHERE: The Top of the Standard

WHY: To celebrate Pride Month and motorola razr’s long-standing relationship with New York-based fashion house The Blonds with a limited-edition lanyard with all proceeds benefiting the New York City Anti-Violence Project.

THE VIBE: Native New Yorkers and the city’s tourists and transplants alike know just how coveted an invitation to the once-called Boom Boom Room is, with many of the industry’s exclusive parties often held at the top of the Standard Hotel. Luckily for me, I was able to make my way to the venue just before the long line of attendees started, and as my first time there, I would say the experience did not disappoint.

I arrived an hour before the party to chat with David Blond ahead of the event, one of the designers and creative director of The Blonds. While making my way up the stairs and into the room, I was greeted by glittery disco balls hanging from the ceiling and a crowd of models backstage, with the glam squad rushing to get everyone ready for the big night. The giant venue held an overview of New York City’s downtown skyline right at sunset and as I waited for the final rehearsal to end, I ran into the surprise performer of the night, Tinashe, who stood on top of the bar with a mic in hand and in sweatpants.

Once the night officially started at 8 PM, the crowd almost instantly flooded the room to grab a cocktail, which was named after motorola razr and The Blond’s collaboration. The models were posed in one corner of the room draped in extravagant outfits, setting the tone by dancing to the music (and yes, Beyoncé’s “Break My Soul” and Drake’s Honestly, Nevermind did in fact play that night.) A slew of celebrities, models, and influencers was also in attendance, joining alongside the models on stage and chatting away. The venue got so crowded that I may or may not have a drink spilled onto myself, but I still carried on.

By 9 PM, Tinashe finally hit the bar in a crystal-studded two-piece and heeled boots, performing her hit tracks like “Link Up,” and the slippery bar didn’t stop the singer from hyping up the audience. Following the performance, the models also used the bar as a catwalk, strutting in their blinged-out outfits and feathered coats, and posing with the motorola razr phones. Guests continued to party the night away for the rest of the evening.

BEST DRESSED: The night didn’t end without having some of the most stylish guests in attendance. The best-dressed list includes Susanne Bartsch’s crystal-embellished look, Tinashe’s studded two-piece, and Dylan Mulvaney’s spiked corset.

OVERHEARD: “What am I looking forward to tonight? A cocktail and maybe a slice of pizza.” – David Blond, designer and creative director of The Blonds