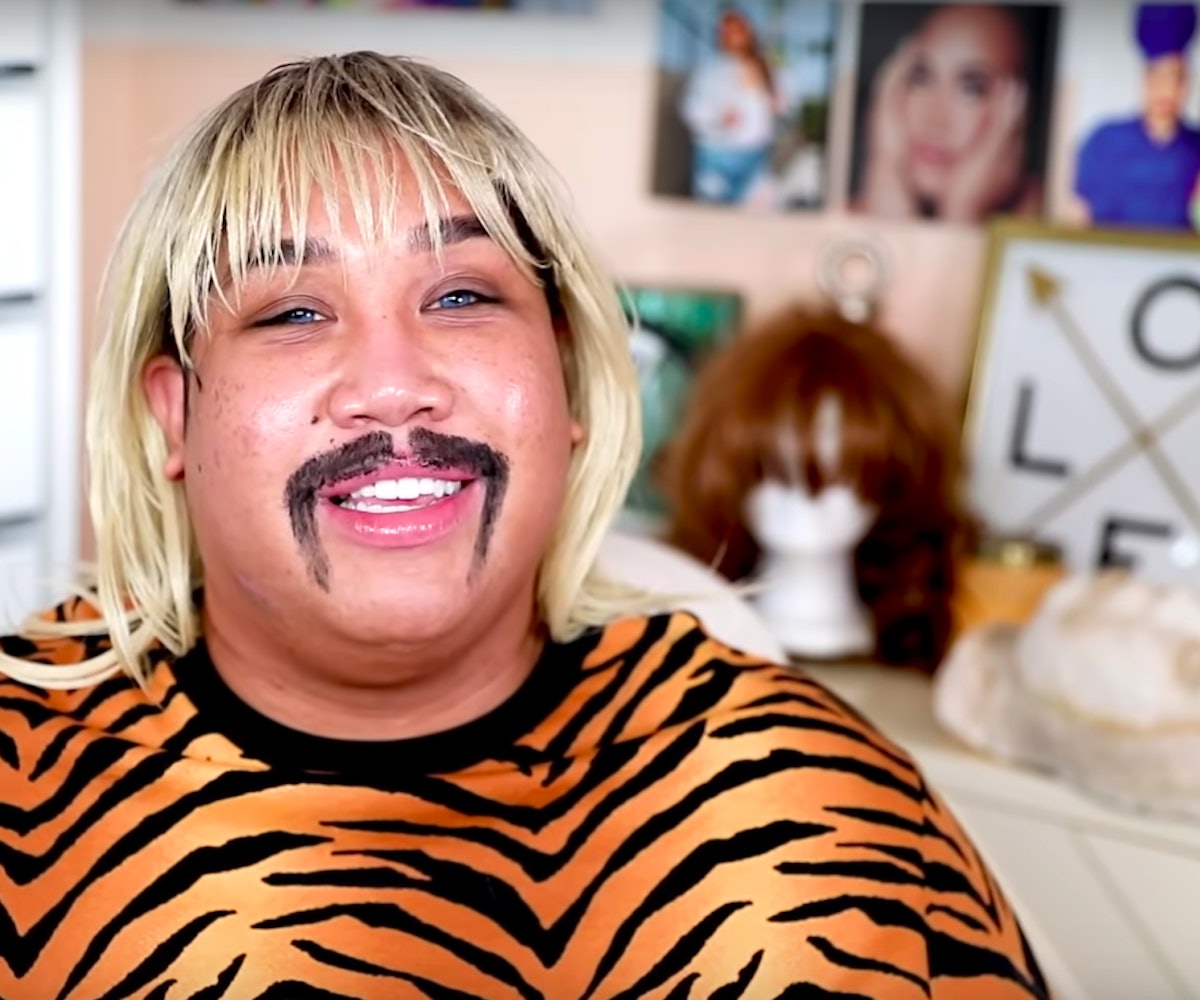 Everyone seems to be talking about Netflix's newest series, Tiger King: Murder, Mayhem, and Madness. From Cardi B to Miley Cyrus, the world is fully enamored with the thrilling documentary and its puzzling conclusions. Although some disagreement regarding the possible outcome of the series remains the talk of social media, it's safe to say that when it comes to the Tiger King's personal style, viewers can not get enough. Patrick Starrr is the latest to embrace the Joe Exotic way of living, and for his latest tutorial, the beauty YouTuber transformed into the Tiger King.

For the video, Starrr fully embodies Exotic, relying on a Southern accent, animal print top, and Exotic's bleached mullet. In behind the scenes clips interspersed throughout the video, Starrr reveals that he's wearing colored contacts, a wig, and facial hair made using mascara.

The hilarious clip continues with Starrr taking on the role of Exotic. For his new career as the Tiger King, Starrr shares his favorite products, and surprisingly, the Tiger King is a fan of CoverGirl. "I like to go for that tiger orange on my face," Starrr jokes.

Moving on to the brows, Exotic aka Starrr proclaims his love for Anastasia Beverly Hills Dipbrow Gel. He then applies Morphe, or as he calls it "Morph," bronzer, using the very precise method of "whacking" it on. The pretend Exotic later reveals he has a squad of makeup friends, including Urban Decay, which he relies on for his waterline. "Blue brings out blue," he says.

Although Exotic does struggle with showing off the products, he manages to reveal his choice of mascara, Maybelline's Great Lash, and lipstick, Nars Orgasm shade. Starrr concludes the video with a proclamation, saying, "And that my friends is the Tiger King."

So far, Starrr hasn't shared whether he might again take on the role of Exotic for any future videos, but based on comments left by Instagram followers, many are in support of the look. Sharing the completed routine on Instagram, Starrr posed as the King. Instagram reactions have included laughing emojis and plenty of OMGs, while over on YouTube, one fan wrote, "I didn't know I needed this until right now."

See the incredible transformation for yourself, below.