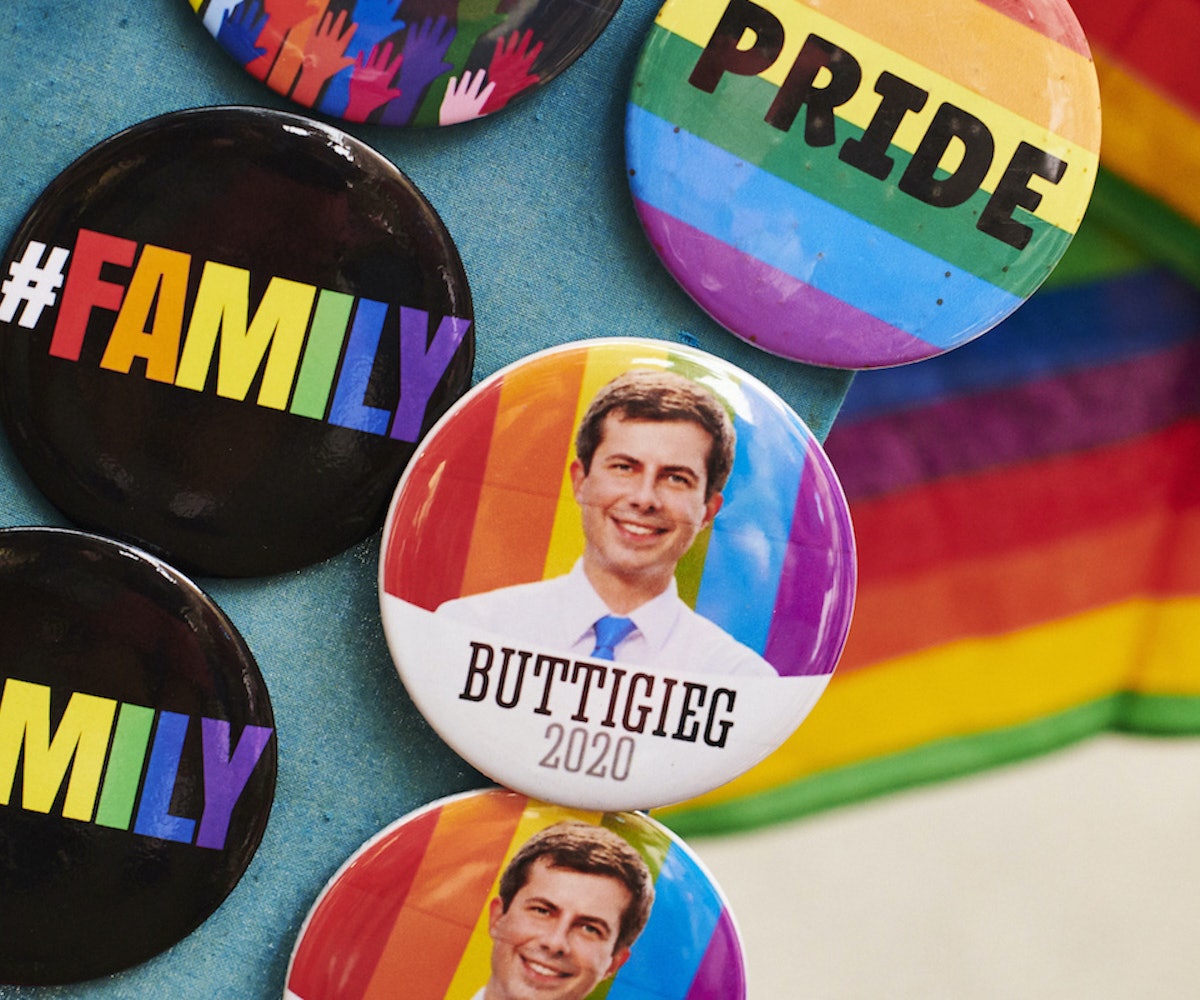 Last year, my mom sent me a text message. Have you heard of Mayor Pete Buttigieg?, it read. Of course I have, I answered. I had been working in queer media for at least two years at the time; it would have been nearly impossible for me to be unaware of this enigmatic politician: an openly gay, married, two-term mayor from South Bend, Indiana who, in a move that would serve as a shock to the political system as we know it, managed to mount a bonafide campaign for the 2020 presidency. By the time my mom sent that text, my excitement about him had cooled down, but there was no denying that something about his infiltration into the upper echelons of the political system still felt groundbreaking. When all was said and done, one element of his identity still made him an outlier — and a shoe-in as a candidate I should be expected to look up to and adore. My mom noted as much when she followed up with: "He's gay. Do you like him?"

When Mayor Pete first announced his exploratory committee to run for the presidency, just over a year ago in January 2019, the move did feel appropriately historic. My unceasing support for Bernie Sanders, a holdover from the 2016 race, never waned, but admittedly, I was excited about the prospect of an openly gay candidate — especially since, during those early days, Buttigieg seemed innocent enough. He was well-spoken and seemingly sincere. He loved his husband, Chasten. He even kissed him on a national stage! Like many others at the time, I didn't know much about his politics aside from the fact that he was a Democrat that had managed to secure the mayoralty in a historically Republican state not once, but twice in a row.

But as time passed and Buttigieg's politics began to take center-stage, I quickly found myself growing less and less enthused. There was the way he talked about his military service as if it was the most important thing he had ever done, while never expressing any qualms with the military's historical role as a domineering institution of imperialism. (He eventually expressed his interest in making military service a legal obligation — or at least a "social norm" — again.) There was the way he uplifted his Christian values, the way he touted his fluency in eight languages, the way he opted out of reading queer media when he started receiving criticism. These elements became even clearer as the race gradually picked up steam: Unlike the left-leaning Bernie Sanders orElizabeth Warren, Buttigieg did not disavow billionaires and their donations. In fact, he welcomed them with greedy, open arms. Perhaps this shouldn't have been a surprise considering the reverence he held for his time spent working at McKinsey, widelyconsidered to be one of the most insidious marketing firms in American history.

Still, the most troubling aspect of Buttigieg's campaign was the idea that this particular gay man — a 38-year-old, white, upper middle class-raised, Ivy League-educated, Rhodes Scholarship-wielding, married man — didn't necessarily feel like the gay man we need in the White House right now. An overwhelming, underlying sense that Mayor Pete was not a true, adequate representation of the greater LGBTQ+ population tainted his campaign for many. Even the seemingly impressive feat of becoming a mayor in Indiana despite being gay was marred by my eventual realization that, in reality, Buttigieg had stayed in the closet until after he was elected — precisely because he feared coming out earlier would have negative repercussions on his political ambitions. The idea of a career not in politics was never an option, I guess.

Last July, gay author and critic Dale Peck wrote an incendiary piece for The New Republic. Titled "My Mayor Pete Problem," the since-unpublished story sought to examine the ways that Buttigieg represented the wrong type of gay. Over 3000-odd words, Peck laid out his argument by comparing "Mary Pete" (as he addresses him throughout the entire piece) to a 15-year-old "gay teenager." Citing Buttigieg's relatively recent entrance into public gay life — he was in the closet until he was in his mid-30s and then proceeded to marry the first man he ever dated — Peck begrudged the idea that Pete, by all means a new-to-the-scene gay, would end up in the White House only to realize, years later, that he never got to adequately explore his gay adolescence.

"Why should I, as a gay man, feel compelled to support him when that part of him doesn't feel salient at all?"

Admittedly, I didn't necessarily agree with Peck's piece. An air of arrogance ran throughout, particularly in regard to the anecdote that framed the entire thing, which finds Peck reflecting on an exchange he once shared with a buttoned-up gay man who he ultimately told, "Take a good look at yourself and your world, reject everything in it, and then get back to me." I also didn't find it fair to frame Pete's relative inexperience in the gay dating world as a sign that he was unequipped to successfully run the country. But there were elements that did stick out to me: Peck said Pete's belief in "healthy capitalism" was "a bit like saying you believe in 'healthy cancer.'" He zeroed in on the basic issues inherent in Pete's call for "Medicare For All Who Want It." Pete was, as Peck described him, a "neoliberal and Jeffersonian meritocrat."

These arguments were worthy, and though many people tried to pigeonhole Peck's whole article as "homophobic," I hesitated to agree. Sure, he was judging Buttigieg's viability as a worthwhile candidate based solely on his gayness. But as a gay man myself, I understood the need to hold one of the most visible members from my community accountable for the potentially life-threatening ideals he held as sacred. Here was a gay man that wanted to bring back mandatory military service, who opposed free public college and canceling existing student loan debt, who did not want to grant voting rights to incarcerated people, who was against universal childcare and Medicare for All — all things that have very specific consequences for queer people. By all means, Pete had let certain elements of his personhood (his whiteness, his financial status, his health) overshadow his identity as a gay man. Why should I, as a gay man, feel compelled to support him when that part of him doesn't feel salient at all?

Which is why, in recent months, my queer friends and I have started cracking jokes at Pete's expense. It feels great, providing us a much-needed sense of catharsis as we've tried to reckon with the once-realistic potential of a Pete Presidency. And we aren't alone. Queer people all across the internet have done the same, leading to a host of hilarious memes, like my personal favorite, "LGBTQ, as in, Let's Get Buttigieg to Quit" (now available on tote bags and stickers).

This meme, in particular, began to circulate everywhere again on Sunday night, when the candidate spontaneously dropped out of the race after slowly losing momentum in the preliminary caucuses. For many, it was a cause for celebration. But as I scrolled through my Twitter feed in the hours following the news, I came across just as many triumphal joke tweets as I did tweets condemning them, tweets that insisted jokes at Pete's expense were not necessarily homophobic, but did have the potential to discourage young queer children who may have looked up to the former South Bend mayor as proof that they, too, could grow up to be anything they wanted to — including the President of the United States. The majority of these tweets annoyed me — after all, I had tweeted my fairshare of jokes as well — but by the same token, upon further introspection, I could, in a very small way, understand the sentiment.

Whether or not Mayor Pete was the kind of gay I would want to hang out with (he's not), sleep with (he's not), or even see holding the highest position in the land (he's certainly not), it is true that he managed to run a surprisingly successful campaign using a platform that didn't ignore who he was. Like many candidates before him, Pete was married. But unlike any others before him, he was married to a man, and the former Indiana mayor was unafraid to flaunt Chasten around in the same way Barack did Michelle several years ago, in the same way Donald Trump continues to do with Melania. His run was historic for many reasons, no less that he actually stood a chance — more so than many of his opponents like Tulsi Gabbard or Tom Steyer.

And therein, I guess, lies the central problem, the nagging split I feel between celebrating Pete Buttigieg's accomplishments as an openly gay presidential candidate and bemoaning what turned out to be incontrovertible proof that many gay men are privileged enough in other ways that being gay ceases to have any real bearing on their day-to-day lives. It's exciting to know that America may be willing to treat queer people with an ounce of respect, sure. But Mayor Pete's run also reminds me of the early 2010s, when "queer liberation" was conflated with "marriage equality," leading to a period of several years where the only thing mainstream members of the LGBTQ+ community were focused on was making themselves appear more like their straight counterparts. In the meantime, trans women were dying at alarming rates, queer teens were being kicked out of their homes and forced to live on the street, HIV rates were skyrocketing, and, in many states, men, women, and nonbinary people were still legally being fired just for their sexuality and/or gender identity. But sure, let's make sure Adam and Steve can tie the knot in Nantucket soon. We're going to keep that at the top of our list.

I will concede that Pete's run was historic. (And my mom would agree!) But in 2020, I don't want a gay president just because he's gay. When the time comes, I want a gay president that I would want as a president even if he weren't. I am happy that Mayor Pete Buttigieg's run has moved the goalpost. But hopefully, in 2024, another (better) queer person will run — and do it the right way, on a campaign that puts queer identity and LGBTQ+ issues at its center.

We'll just have to wait and see.