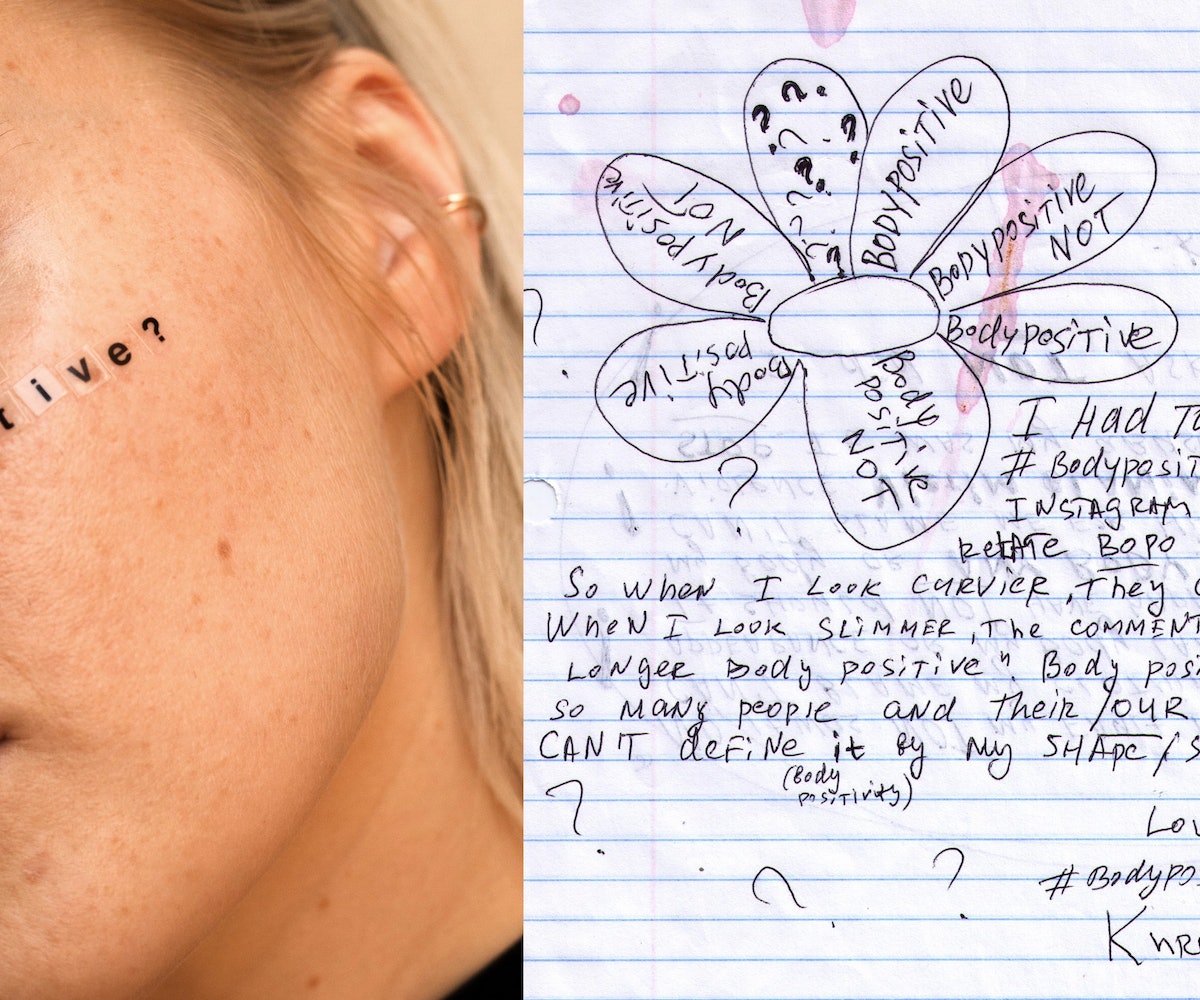 In a culture of Photoshop and Facetune, photographer Peter "PJ" DeVito is changing the norms of portrait photography one sticker at a time. The 21-year-old illustration student has risen to Instagram fame with his raw portraits that feature a diverse array of models speaking on everything from bodily autonomy to acne. The twist? He puts letter stickers on the faces of his models, spelling out affirmations of self-love in hashtag form.

Since 2015, DeVito has been using text to combat stereotyping, normalize differences, and promote body positivity to his viewers. "First, I started asking models to find dictionary cutouts or magazine cutouts, and we would put a message on them. It was a random body part so that it would be anonymous," he said about his earliest projects.

DeVito experimented with temporary tattoos before he found his new inspiration in an unsuspecting place—the craft aisle of the dollar store. "I went to the dollar store and got small, cheap letter stickers that I put on people. I just love writing on people," he said about his now-staple medium. With transparent stickers in hand, he writes phrases like, "Perfect does not exist" and "Show me something natural like ass with some stretch marks" on his models, referencing Kendrick Lamar's "HUMBLE."

His text-based photography explores racial stereotyping, sexualization, gender diversity, and more, all based on his models' experiences. DeVito then asks them to write a letter detailing the meaning behind their chosen phrase, which he scans and includes with each photo. Yvesmark Chery, a model with vitiligo, explained the reasoning behind the phrase, "What's wrong with your skin?" in his letter, saying, "I do not want people to view someone that is not 'normal' as an outcast, but as a pleasant anomaly."

His past projects have become viral sensations, particularly a photo of his own face and acne with the phrase "I'm so fucking sick and tired of the Photoshop," which amassed almost two million likes after being reposted by Cara Delevingne. DeVito's photos depict self-love and acceptance in a compelling and eloquent way, spotlighting testimony of queer people and people of color.

In late 2018, DeVito teamed up with former America's Next Top Model contestant and model KhrystyAna Kazakova for a photo series titled "More Than A Trend," where models' stickers spell out aspects of themselves that go beyond social media movements or industry trends. "The aim of the project is to show how things like body positivity, inclusivity, gender, diversity, [and] sexuality are NOT trends," reads DeVito's description of the series. "[KhrystyAna and I] wanted to come up with a project that touched upon how these things shouldn't be categorized as trends because a trend is a short-lived statement," he wrote.

Kazakova's extensive modeling experience gives her a firsthand glimpse into the appearance-driven industry, therefore bringing a new perspective to DeVito's work. "When it comes to typical standards of beauty, if you look overall, there are certain looks that keep repeating. Now, [modeling agencies] have introduced people with acne, people with disabilities, and there's a whole new side of people that will feel represented," she says.

#BodyHairRocks, #PlusSize, and #AsianGotCurves are among the phrases that models chose to reflect on. Model Liz Harlan, featured above, chose #Queer, saying, "I am queer 365 days a year … my existence is valid." Unique to this series is a short video that shows the model removing the hashtag sticker, speaking to the disposability of our social media personas and our attachment to trends. DeVito's work is an effort to combat brands' attempts to capitalize on "trendy" social media movements, showing that real people—and their identities—won't become the next fad or marketing ploy.

However, despite the industry's nods to inclusivity, Kazakova and DeVito question if it's a genuine shift. "A lot of models that have disabilities, models that are curvy, they feel typecasted. They aren't perceived as just a person, they're perceived as a person that has this or has that," says Kazakova. "Brands cast [them] to show how inclusive they are. Are they really? Are they going to keep doing it? They usually do one campaign to get the buzz, which they do. The question is, are people that are unique feeling used? A lot of them are. It has to be consistent," she said.

Her phrase, #BodyPositive, references her digital presence as a model. "It's incredible how powerful models are. An image could change your life forever, and what models do can affect people hundreds of miles away," Kazakova said. "If you see somebody you can relate to, that can shape your life and how you see yourself. Being force-fed the same food is one thing, but I want to taste different foods!"

"Models aren't props, they're people too," DeVito said. "People should be able to see that, and that's why I like including their handwritten letters. It shows that they're people, they have opinions, and they have thoughts that deserve to be heard," he said. In an industry built upon models who are seen and not heard, DeVito is passing the mic and turning up the volume.

If you'd like to support DeVito's photography or see the rest of the "More Than A Trend" series, you can find his digital portfolio here or on his Instagram.