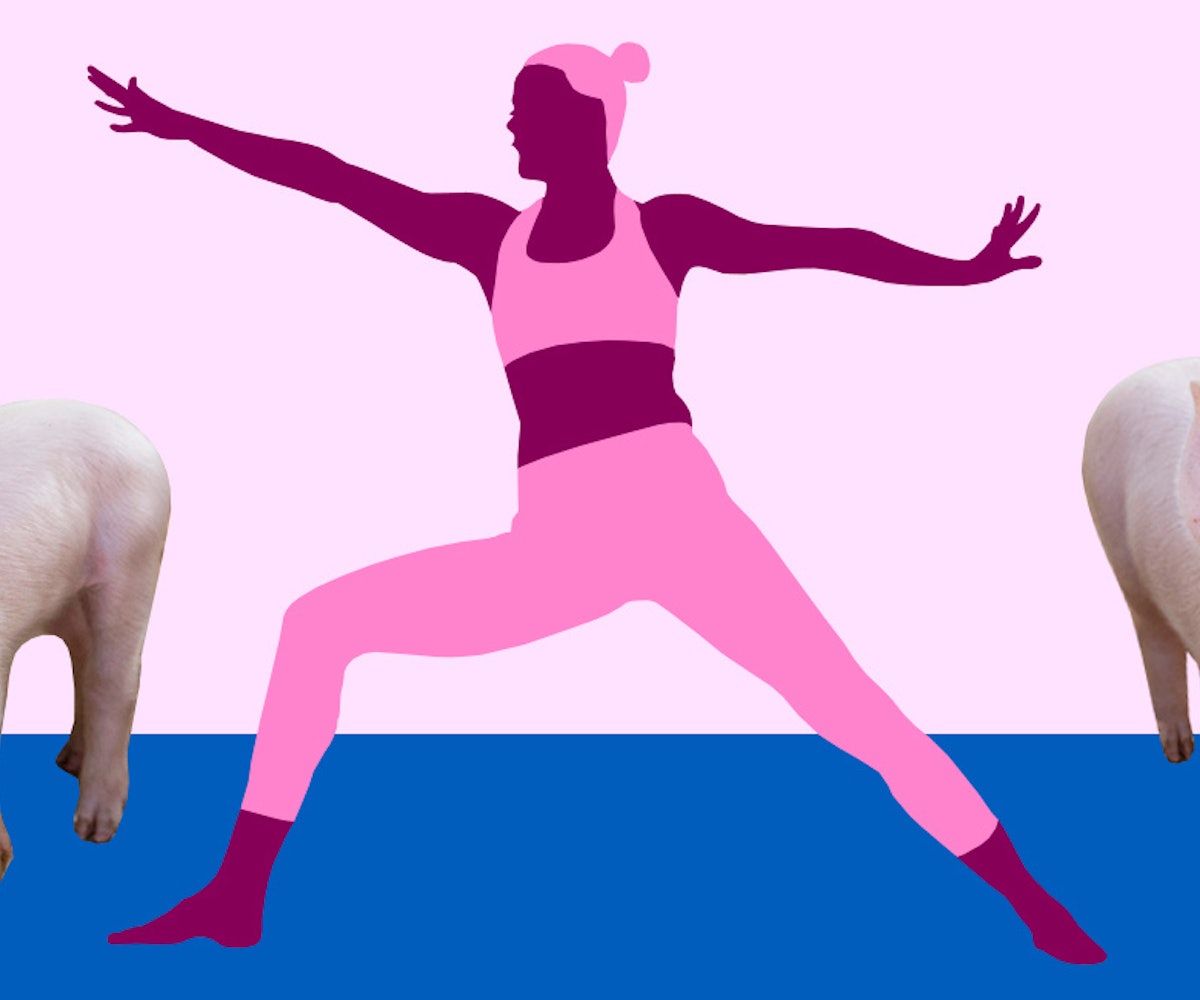 I hate working out. I really, really do. But since, you know, being semi-active is a requirement of staying healthy, I'm constantly seeking new and inventive ways to keep me on my feet.

One lazy Sunday afternoon spent searching for a new class to try, I decided to Google "pig yoga" to see if it was a thing, since yoga is probably the only form of exercise that I find tolerable, and, well, I love pigs. When I found that it was, in fact, a thing in Philadelphia—a quick two-hour drive from New York City—I squealed (hah, hah) with delight.

I really love pigs. I guess you can say that I have a somewhat unhealthy obsession with them, one that began long before celebrities like Ariana Grande and Miley Cyrus made pigs the trendy pet of the moment. No, my great love for pigs began when I watched Babe for the first time as a four-year-old. I then continued to watch it basically every day of my childhood. Fast-forward to 2018, and at any given moment, you can find me sobbing over the Instagram stories of one of the many Insta-famous pigs I follow. Not only are pigs the cutest, sweetest, and some of the most loyal creatures on earth, they're also smart—even smarter than your dog. What's not to love about them?

With that said, off to Philly I went to visit Tuck Barre & Yoga and take a Saturday afternoon pig yoga class.

Studio owner Callie Kim first teamed up with the lovely FairyTail Acres this past July to host her very first pig yoga class, and they have since made it a monthly event. FairyTail Acres is a rescue organization located in Lancaster County, Pennsylvania, that not only saves our sweet porcine friends but also trains them to become therapy pigs. Founder Chris Hainley brings six pigs-in-training—some tiny, some enormous—to roam around the studio as Kim takes 20 or so yoga- and pig-enthusiasts (and just the plain curious) through a vinyasa class.

The class itself is extremely welcoming and open to those of all skill levels—from first-timers to seasoned yogis—something I found comforting, as I'm not exactly the most confident when it comes to my own yoga practice. But really, it didn't even matter in the end, because a handful of snorting, squealing angels were waddling and wiggling around me, eating graham crackers out of a cup placed next to my mat—perfecting my Warrior 3 was not really my top priority.

I'm not going to sit here and tell you that it was the best workout I've ever had, because, well, I didn't really do that much. I gave up on whatever pose I was holding the second one of my new swine friends came over to me to say hello. Why would I hold a Tree pose when I could roll around on the floor with Franklin, a puppy-sized five-month-old piglet, instead? What I will tell you is that it was the most magical day of my life. If you, too, love pigs (or animals in general), you should really consider trying a pig yoga class, because it will be an experience you never forget.

Sure, my life plan of raising a pig of my own might be put on hold until I live in an apartment big enough to house one (and, yes, I'm fully aware that "mini" pigs don't exist, and I will be perfectly happy with swine son or daughter reaching medium- to large-dog size, thank you very much). Until then, though, there's always pig yoga. And repeated viewings of not only Babe but also Grande's original video for "breathin.'"