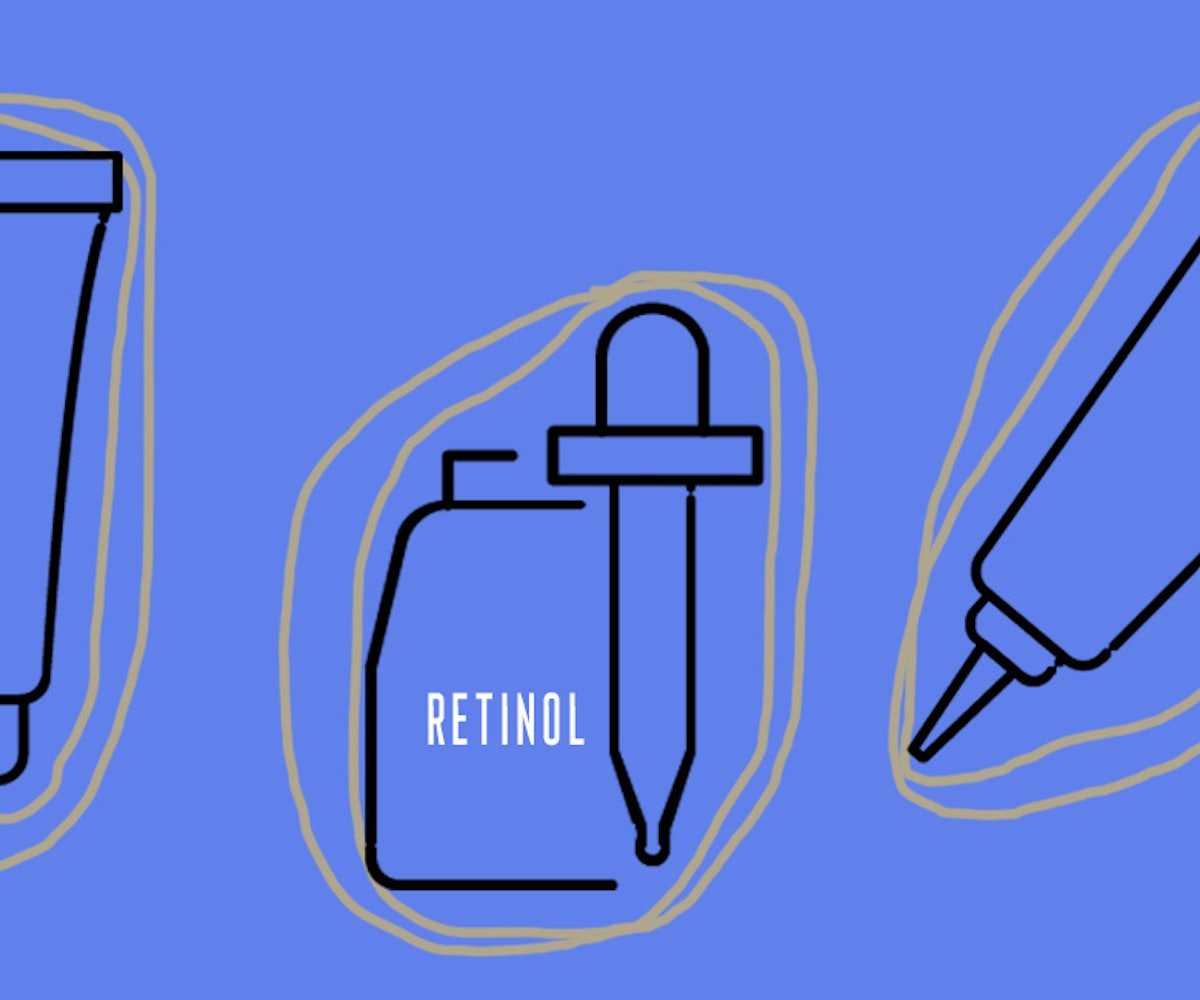 Last month, Frank Ocean shared his skin-care routine with the world. It includes night cream, listening to your mom, using a gentle face wash, and retinol. Ocean doesn't come off as a three-in-one product kind of guy, so none of it was that surprising—except the retinol part.

The ingredient has become ubiquitous over the years, with more and more brands incorporating it into products, but it's still a tricky sell. Even with the wunderkind qualities attached to it (or maybe because of them), many people—including me—don't see it as being the most approachable ingredient out there. So, I decided to go to some experts with the questions I had, in the hopes of understanding and maybe incorporating this mythical ingredient into my routine.

Read ahead for a retinol rundown.

In very basic terms, retinol is a form of vitamin A. It helps to increase collagen, treat acne, prevent new acne, fade age spots, prevent and treat fine lines and wrinkles, exfoliate, and can even decrease the risk of skin cancer, according to dermatologist Dr. Amy Wechsler.

What's this business about retinoids?

Well, retinol is basically an over-the-counter retinoid. It's in the retinoid family, but it's not as powerful as prescription versions. If you want more science-y details, you can go here. Otherwise, all you really need to know is that retinols are a more accessible, less intense version of retinoids.

So, does that mean the OTC version isn't as effective as the prescription one?

Technically, yes, and Dr. Wechsler says she isn't the biggest fan of them for that reason. But, it's a good starting point for beginners, especially those that have sensitive skin or are scared they're going to have a reaction to prescription retinoids. For those patients, she says, "I'll give them a retinol for them to get used to it, to see that they can tolerate it, and then transition them to a prescription retinoid… My goal for everyone who wants to use retinol is to get them on a prescription retinoid."

People's opinions on this differ though. Dr. Loretta Ciraldo is a big fan of retinols because they're a little more skin-friendly. "We realized, not too long ago, that retinol is really neat because it's not as irritating," she says. "A lot of people were put on Retin-A, or Tretinoin, by their dermatologists and the sense was almost like, 'Wow, I sort of like this, but if I use it every day, it can rip my skin apart.'So then we came up with this idea of 'let's use retinol.'"

Let's go back to the irritating bit…

Yes, lets. Retinoids, and as a result retinols, are a do-everything ingredient, but it can also be tricky for some people. "The irritation is kind of married to the efficacy," Dr. Wechsler explains. It can cause drying, and it can be a trigger for those with rosacea. But, she says, if you incorporate it into your routine slowly, many people can get used to it over time.

If you're concerned about drying and redness, Dr. Ciraldo recommends beginning with a lower concentration—something in the .1 to .5 range—and working your way up. If you prefer to start with a higher percentage because you want to see the benefits, she suggests starting out by using it two nights a week. Then, you can gradually add a night a week depending on your results. Another tip: "This is a simple, but I think important, thing: You're always going to want to apply it in front of a well-lit mirror," Dr. Ciraldo says. "So if, for instance, after a few days of applying it, you find that an area is now looking a little red or dry and that area would typically be closer to your eye, even just the top of your cheekbone, then just don't apply it there."

There's a common misconception that, if you can't feel the product working, it's not actually working. This is bullshit. "There are a lot of women who believe that in order to see benefits, you've gotta really overwork your skin," Dr. Ciraldo says. "You will see benefits without having to go through any discomfort. And I think that's sort of true for any product. Don't do that to yourself." If you feel a little tingle when it's first applied, that's fine, she advises. But if your skin starts to get really red or starts burning, then wash it off.

What age should I start using it?

Dr. Joshua Zeichner typically recommends incorporating it into your routine after the age of 30, "when skin cell turnover and collagen production slows down." While Dr. Ciraldo says that she has some patients who have used retinoids for acne since they were in their teens and just never stopped. "In a sense, I don't believe in starting to treat skin just prophylactically," she says. "So in your teens, you may want to use retinol for acne. In your 20s, many people are still suffering from hormonal breakouts and this kind of thing, so retinol is really a nice thing to try. And it's also great for anti-aging, as a preventative measure."

Do I need to be a vampire to use it?

No, but you do need to wear sunscreen, which you should already be doing anyway. Ocean said in his GQ interview about retinol: "You can't have the retinol in your creams in the day because it makes you more sun-sensitive, so you wanna throw that on at night." This isn't necessarily true. As Dr. Wechsler says, "There's definitely some sun sensitivity involved with retinoids and retinols, but if you wear sunscreen, there's nothing to worry about."

Does it play well with other ingredients?

You should be fine, but tread carefully using it with acids. Dr. Ciraldo says alternating days is best in the beginning. "You have to build a tolerance," she says. "So you probably, over time, might be able to use it on the same day."

What about the different versions out there…

There are so many, right? Ugh, beauty and its options. Dr. Ciraldo says it doesn't really matter which form you use—serum, cream, toner, etc.—and that the most important thing to keep in mind is the percentage, "because, really, it's going to be the most reflective of the benefits you'll get."

TL;DR: Should I hop on the retinol train?

Yes! There are some exceptions, but it's one of the most beloved ingredients by both beauty insiders and dermatologists for the very simple reason that it works. "Retinol has been a staple ingredient for decades," Dr. Zeichner says. "Despite a variety of fad ingredients to help treat aging skin, none compare to the efficacy of retinol." Dr. Wechsler adds that "people are always looking for the fountain of youth in a bottle," and retinols and specifically prescription retinoids, "are the strongest thing to that in terms of any cream you can get."