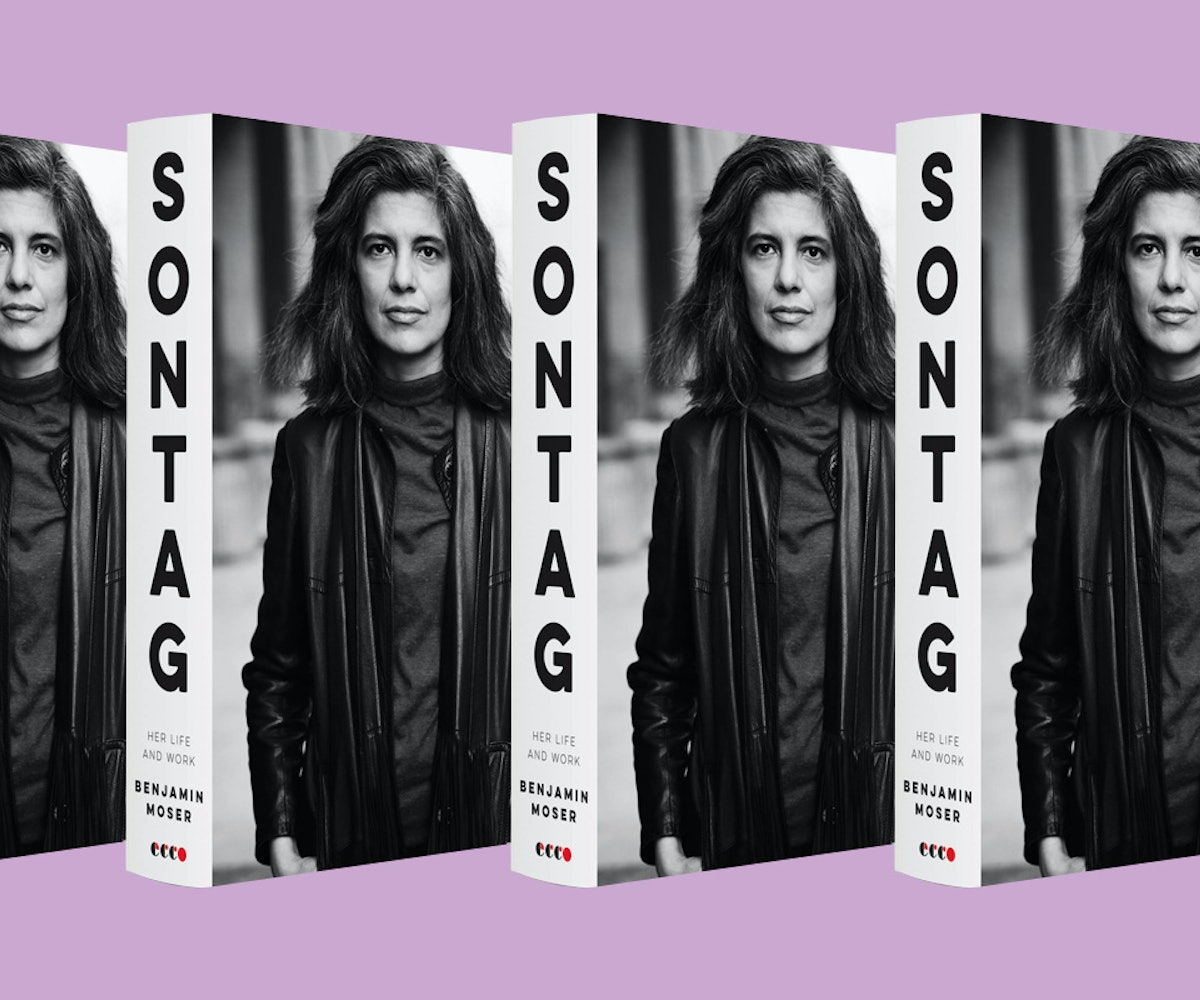 Over a half-century has passed since the publication of Susan Sontag's 1964 essay "Notes on 'Camp,'" but attendees of this year's Met Gala, which was inspired by that essay, seemed more confused than ever about what camp means. Camp used to be an insider taste among gay men, and the very exclusionary Sontag made herself famous by attempting to describe it. After she exploded this bomb, which helped to merge high culture with popular culture, Sontag returned to the high culture she loved as it began to disappear—for each woman kills the thing she loves.

Following her death in 2004, Sontag entered into legend as a symbol of an insular American literary scene long since destroyed with her unwitting help. Several memoirs about her have been recently published, and her own disarming journals have begun to appear in print. As Benjamin Moser writes in his ample new authorized biography, Sontag: Her Life and Work, there is no criticism you can make about her writing that she did not make first and better. Moser, the author of a 2009 biography of Clarice Lispector that made her a literary star in English-speaking countries, spent many years researching Sontag and interviewing people who knew her. The 800-page result is daunting.

Moser's book begins with a coup: a photo of Sontag's mother Mildred with her own mother on the set of a lost 1919 silent film about the Armenian genocide. The question of photography, particularly war photography and what is real and what is not, became crucial to Sontag in her classic 1977 book On Photography and her final 2003 monograph Regarding the Pain of Others, and so it feels more than fitting that Sontag's mother Mildred left behind a photograph that could be taken either for the thing itself or for its facsimile.

While Sontag was alive, Mildred was barely present in her mythology, but with the publication of Sontag's journals and now this biography, it is evident that Mildred was the crucial figure in her life. Sontag was so obsessed with her mother that she projected Mildred's withholding image onto many of her female lovers. "She was clearly in love with her mother," said Harriet Sohmers, an early Sontag girlfriend. Sontag's father died when she was a child, and Mildred kept his death mysterious to her daughter, who was known in her youth as Sue Rosenblatt.

At school, Sue was hit in the head with a rock and called a "dirty Jew," and she had to get stitches. This was an early warning to the woman who made herself into Susan Sontag that you are less likely to be attacked if you can't be labeled. Moser is critical of Sontag's refusal to identify as a female writer, as a Jewish writer, and as a gay writer, yet he details why she was leery of that. She knew she was gay as a teenager, but she forced herself to sleep with men and married the academic Philip Rieff when she was 17.

This marriage to Rieff, which consumed most of the 1950s for Sontag and produced a child, her son David, is revealed as both better and far worse than has been previously described. They had sex a lot in the beginning and talked constantly, but she began writing his book reviews and assembled his notes into a 1959 book on Freud that made his reputation, for which she received no credit. When Sontag left her husband in order to live in Manhattan with David and her lover María Irene Fornés, Rieff attempted to smear her in the press, but he behaved so badly that his plan backfired and she did not lose custody of her son. Forty years later, Rieff sent her a copy of the book she had written for him with an abject apology.

The asthmatic, self-loathing Sue Rosenblatt and the self-denying Mrs. Philip Rieff gave way in the Manhattan-of-the-1960s to Susan Sontag, critic extraordinaire and intellectual exemplar—but she agonized over her insecurities in private to her journal. She loved cultural lists and rankings in her essays, yet she was against categorization of all kinds when it suited her personal and ideological purposes. Writing about Sontag in this period, film critic Pauline Kael sarcastically commented, "I think in treating indiscriminateness as a value, she has become a real swinger."

After "Notes on 'Camp'" set her up and her 1966 book Against Interpretation solidified her reputation, Sontag amused herself with boldface names, like Mike Nichols and Jackie Kennedy and Warren Beatty, with whom she had a month-long affair, which seems to have been practically compulsory for famous women of her generation. Was this a kind of selling out, or a giving in to pleasure? Moser does not judge her on this score, but he makes clear that the gay artist Paul Thek, a close friend who heavily influenced her thinking, did not court the mainstream in this way, and he paid a price for it.

Moser writes that Sontag became known as "the world's most authoritative blurber," and she was protected her whole writing life by her publisher Roger Straus, with whom she also had a brief affair in the beginning. Straus paid her advances for books she never wrote and put her on his company's health insurance when she got sick with cancer in the late 1970s, but it was glamorous Mildred who indirectly gave her daughter that final visual touch for her image. Sontag lost all her hair after chemotherapy, and when it grew back white, Mildred sent her to a hairdresser who dyed it black but left one strip of white in front.

Sontag and her son David ruled over the cutthroat Manhattan intelligentsia in this period, and they were highly conscious of that. During intermission at a theater, David was overheard asking his mother, "Who should we be snubbing?" Sontag installed David at Farrar, Straus and Giroux and insisted that he be her editor. They saw themselves as royalty, or at least that's how they were treated. Sontag had trouble seeing other people as anything but extensions of herself, and this led to a very unhealthy relationship with David, who has handled the burden of being his mother's son fairly gracefully.

Moser is a tenacious biographer, keeping a tight hold on his narrative and reaching firm conclusions. He is very tough-minded, as Sontag herself was at her best, and his mind is like Sontag's in that he can make very sharp turns and land decisive blows. Moser takes apart one of her most notable essays of the 1970s, "Fascinating Fascism," in which she herself took apart the cult of Nazi filmmaker Leni Riefenstahl, for lacking examples and citations, for being too vague, even though so much of it sounds right. "Susan was better at admiring than attacking, she was better at doubt than assertion," Moser writes.

Sontag wrote some forbidding novels and short stories, and she started showing up as a fictional character in the novels of other writers. In Edmund White's Caracole (1985), she is high-minded Mathilda, about whom he writes, "Mathilda appeared to waste a lot of time pondering the moral aspects of other people's actions. Since her theoretical resourcefulness was joined to a powerful but naïve egotism, her moral researches always ended with a conviction of her enemies, an exoneration of her friends and a sort of ethical perfect attendance pin for herself." And this is mild compared to Gary Indiana's portrayal of Sontag as the cruel and obtuse Tova Finkelstein in his novel Do Everything in the Dark (2003).

But she had her admirable moments. After the Iranian government called for Salman Rushdie's death in 1989, Sontag stepped right up to defend him when even Norman Mailer was hesitating. She was ready for the big gestures like that; it was in day-to-day life that she could be impossible. Her sadomasochistic relationship in the 1990s with photographer Annie Leibovitz is described in punishing detail in Moser's biography.

Leibovitz does not fit easily into the Sontag myth. She was not on the cultural level of former Sontag lovers like Fornés, who was a major playwright, or the choreographer Lucinda Childs, and she was aware of that. Leibovitz wanted Sontag's approval, and to get it, she endured continual verbal abuse from Sontag in public. When she was young, Sontag had been the submissive partner in relationships with more powerful women. As an older woman, she took on the dominant, sadistic role while also allowing herself to accept very large amounts of money from Leibovitz, in the neighborhood of eight million dollars. Her son David calls them "the worst couple I've ever seen in terms of unkindness, inability to be nice, held resentments."

When cornered about her sexuality in 1999 for the Guardian, Sontag told her assistant, "I don't think same-sex relationships are valid." It seems that her own thinking on homosexuality had not moved beyond the prejudices of the late 1940s and 1950s, but Sontag did speak to Out Magazine editor Brendan Lemon in 2000 about possibly doing a profile where she would discuss her sexuality, and she was more expansive with him. "I grew up in a time when the modus operandi was the open secret," she told him. "Maybe I could have given comfort to some people if I had dealt with the subject of my private sexuality more, but it's never been my prime mission to give comfort, unless somebody's in drastic need. I'd rather give pleasure, or shake things up."

This revealing interview, published in 2005 after Sontag's death, is not quoted in Moser's book. And when he quotes from Terry Castle's very funny 2005 article about her friendship with Sontag, he includes the section where Sontag is at her most absurd—showing Castle how to run from sniper fire while they are in a pricey shopping area —but does not include the key scene where she yells at Castle for criticizing Virginia Woolf's Orlando, which exposes her vulnerability.

Sontag was fearful that she would be judged by posterity only for her worst efforts and not for her best. Moser unsparingly describes how this fear directly leads Sontag into a nightmarish scene of self-deception: Roger Straus tells her that her 1999 novel In America will live on because it won the National Book Award, and she gratefully believes him, even though the win was widely viewed as a sympathy vote. At this point, Sontag had finally become her mother Mildred, described here by Sontag's sister as "the Queen of Denial."

Towards the end of this book, it does begin to feel like Sontag's many character flaws are being crushingly itemized without enough attempt at explanation and relief. Bookworm radio host Michael Silverblatt compares her to Regina in Lillian Hellman's The Little Foxes because of her need to play the old-fashioned "villainous" or abusive diva, and this really is a little much. Like so many major Americans, Sontag was more than a bit of a trickster, and in her best moments as a young and middle-aged writer, she knew this. It was as an older woman that she went astray.

But Sontag is an invigorating as well as comic figure here when she is given a death sentence in 2004 by a doctor whose assistant tries to talk to her about the importance of friends and spiritual values. "I have no spiritual values!" she cries. "I have no friends!" If we view Sontag through the camp lens that she herself described so well, at this point she exemplified the title of a Susan Hayward movie, I Want to Live! (1958). Sontag had the highest standards, and Moser has very high standards when judging both her work and her as a person, and both the aesthete and the masochist in her would expect and want nothing less.

Sontag: Her Life and Work is available for purchase, here.