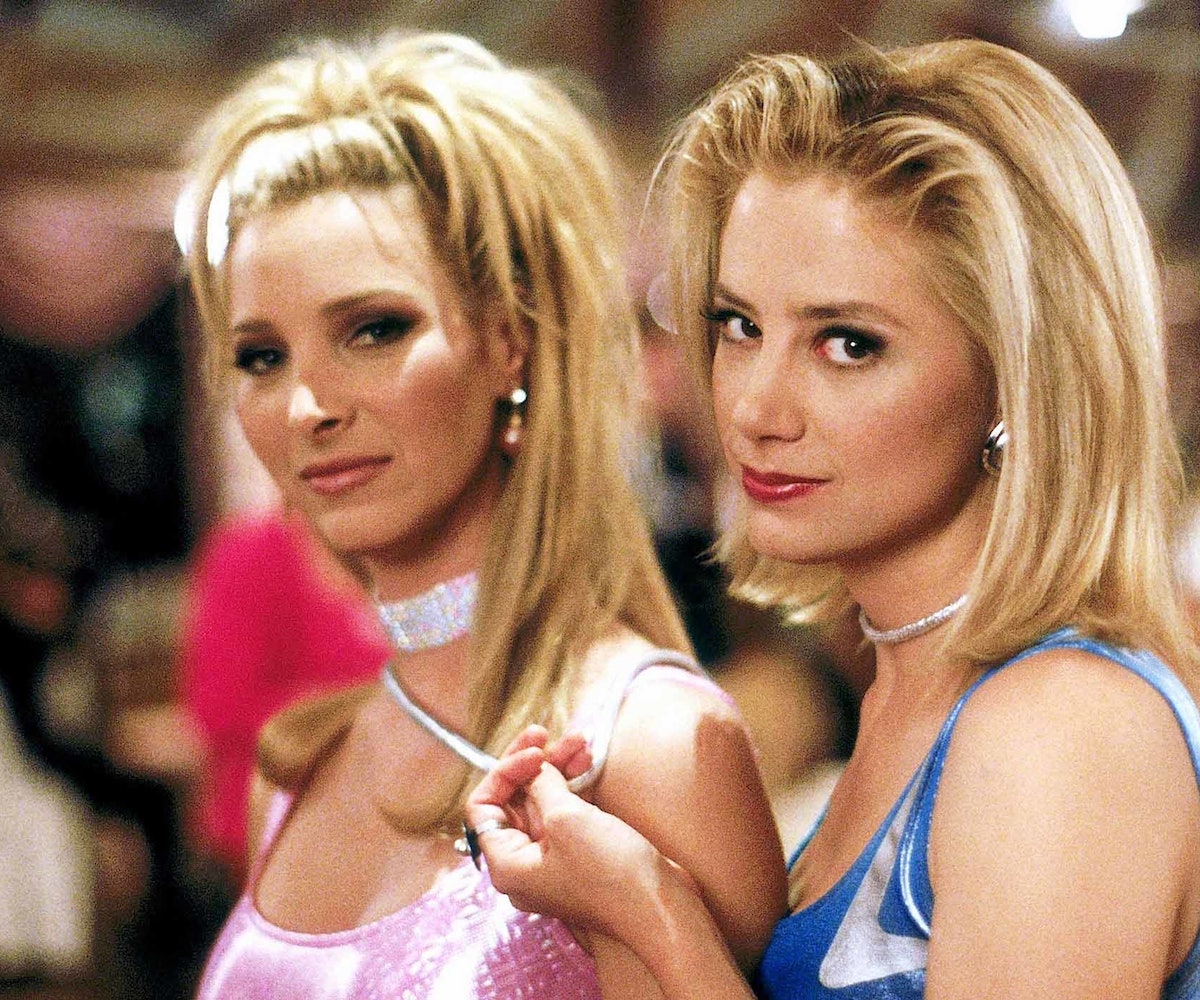 Once I was old enough to (a) have my own, defined tastes and (b) know how to work a VCR, the movie Romy and Michele's High School Reunion was my self-care. I was 10 years old, and it was the late '90s, so, naturally, I was both enamored with the overwhelming femininity of the Spice Girls and intensely invested in the social capital of "cool." This made me ripe for a movie about two underachieving but cute white women who were hoping to attend their high school reunion and stunt on the former classmates who had bullied them 10 years earlier. Every time I watched it, Romy and Michele's High School Reunion made me feel warm and fuzzy.

It wasn't that the movie was aspirational—I knew I shouldn't actually model myself after the titular protagonists (played by Mira Sorvino and Lisa Kudrow, respectively), but it was still really fun to think about doing so. After all, the pair of 28-year-olds lived together in an L.A. apartment right on the beach. Meanwhile, I was battling Chicago's alternately frigid and stiflingly hot temperatures. Romy and Michele binged on all kinds of junk food in times of both celebration and grief. I was a fat black girl shamed by the world for even looking at a cookie, let alone eating raw cookie dough straight from the tub, like Romy did. They wore shiny outfits that were short and tight to nightclubs… and the gym… and job interviews. I had to dress age-appropriately for a pre-teen. Romy and Michele did what they wanted to do with really colorful results, and that was the most alluring thing about them.

Because the source material was so far removed from my own life I didn't even realize that Romy and Michele was essentially a parody of white womanhood. I genuinely thought that one of the privileges of being white and pretty was the right to be dumb and broke, without consequence. That certainly was not the case for me; as a young black girl, I was beat over the head with messaging that I should always be striving for excellence in order to "succeed" in life. The lives of Romy and Michele were what I imagined vacation to feel like, and that's the mental space I put myself in as I visually traveled with them to Tucson, Arizona, as they confronted their pasts.

If adulthood has taught me anything, however, it's that I didn't know a damn thing about adulthood when I was 10. A lot has happened in the decade or so since I last saw my beloved cult classic, so it felt like it was time for a revisit. (Thankfully, Hulu started streaming it earlier this month.) And what I realized watching it again, is that Romy and Michele's High School Reunion didn't only offer a comical version of being grown up, but one that was eerily practical and relatable, even today.

One reason for this is that social media has made every day a high school reunion, thanks to the normalization of nonstop life updates of everyone you've ever met. This has made us increasingly obsessed with comparing ourselves, and our success, to other people. When I attended my own high school reunion a few years ago, I felt like I was being sized up against my Facebook updates. I wondered how Romy and Michele's High School Reunion might play out if it took place in our Instagram-obsessed generation, before deducing that the takeaways would be pretty much the same.

The post-high school Romy and Michele have a life that seemed glamorous to an adolescent me but actually speaks to a different kind of lifestyle, one in which the pair are just fine sharing a bedroom, working out, and spending their spare time making funky clothes to wear. It's the life they dreamed of having as misfit high schoolers. They were always outsiders in their smaller hometown of Tucson, but they flourish in L.A., where they can be themselves.

It's easy to imagine that, if the two friends existed today, they'd be super-online, and have tons of followers—the opinions of anyone from Tucson be damned. But without the modern validation of likes, Romy is still resentful about her high school experience. Since she can't make her former classmates jealous from afar with a perfectly staged Instagram grid, she wants to make a new impression at the 10-year reunion, and comes up with a plan to pose as serious businesswomen—serious businesswomen who invented Post-Its. The plan blows up in their faces, of course, but, as Michele reminds Romy, in the thick of her humiliation, their lives in L.A. are good enough without the approval of a bunch of nobodies in Tuscon. Success and happiness are self-determined, after all, and their longtime friendship is more important than hooking up with a high school crush. This is actually an essential reminder for anyone today who is still caught up in the opinions of people who have no bearing on their immediate lives. (So, all of us?)

Romy and Michele is not without its flaws, though. There is still no reasonable explanation for how Romy, a cashier, and unemployed Michele could afford to live in a beachfront apartment in L.A., even in the '90s. And today I am able to recognize their constant bingeing and dieting for what it is—disordered eating. There is nothing endearing about their constant fatphobia or body obsession. Still, I am more like them in adulthood than I am not.

Like Romy and Michele, the friends I made in middle and high school still sustain me today. They add so much color to my life. And as far as their outrageous style, I can get pretty close replicas of a bunch of their outfits from Fashion Nova. And, I've reunited with a former fling only to discover that they've grown up to be human trash, as well. I, too, kick my heels off to dance to my favorite song—although I'd switch out Cyndi Lauper's "Time After Time" with "Shake That Monkey" by Too Short. And my fantasies also include making out with a millionaire in the back of a chauffeured car. But most of all, I am open to the idea that my real life could be better than whatever alternative I dreamt up when I was a kid.