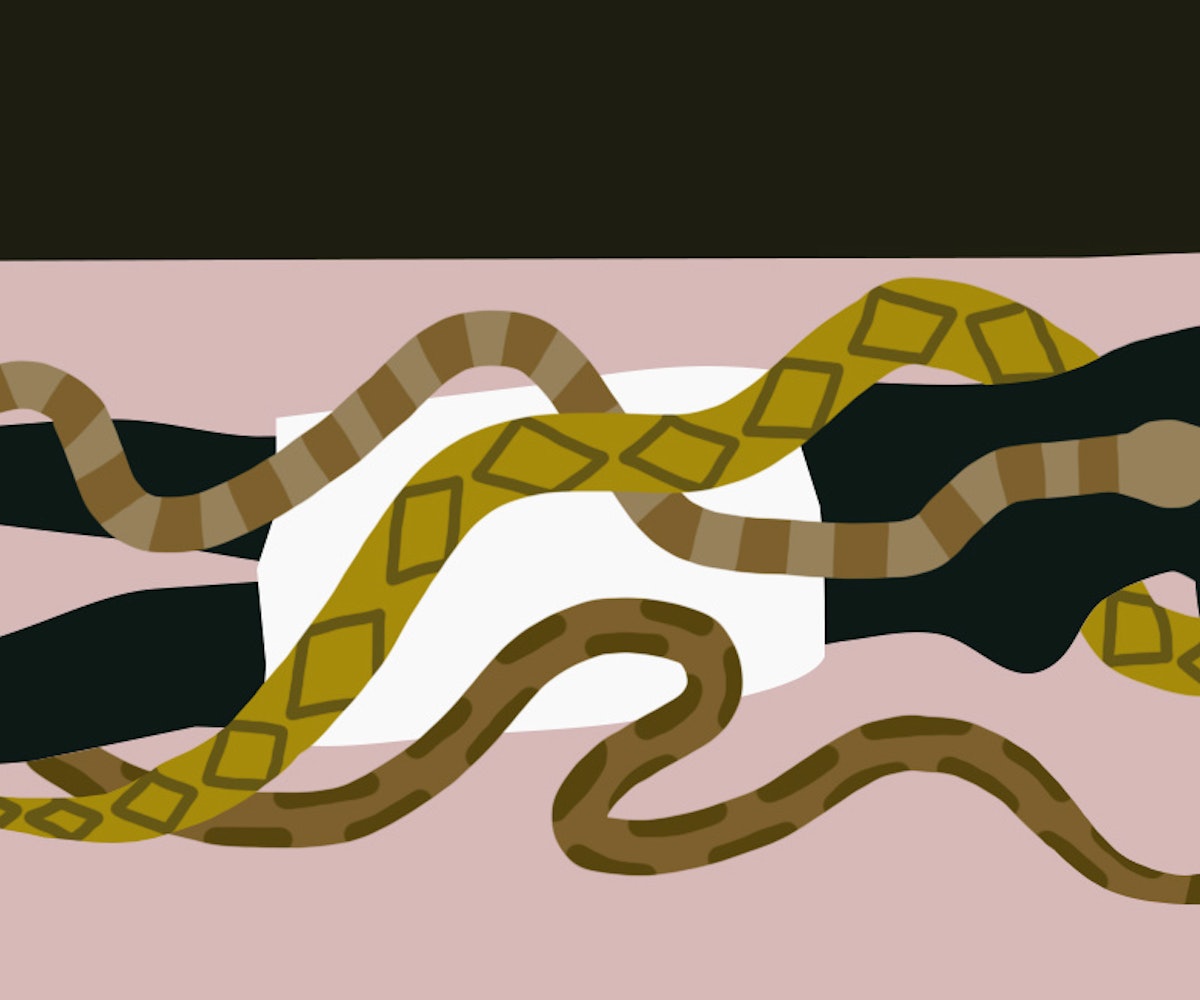 "They're wild animals, you know," Serpentessa, a belly dancer-turned-snake priestess aka "inter-species facilitator," casually says to me right before beginning a ritual snake massage, involving three of her gigantic boa constrictors and, well, me. She then, rather quickly, confirms that in her 25-plus years of working with snakes, no client of hers has ever been injured. I gulp anyway.

As those closest to me know, I'm all for trying new and unconventional things for the sake of healing, whether it's something daring like naked yoga or an alternative treatment like craniosacral therapy. I'm also all for a good, cathartic year-end ritual. So that's why, just two weeks before 2019, I found myself lying down on a table so that I could have three massive snakes writhe all over my body.

2018 was quite a year for me, and by "quite a year," I mean that it was, in many ways, utter shit. It started off great: I spent a few days at a retreat in the mountains where I did yoga twice a day, studied my birth chart, and didn't look at my iPhone. And then things took a turn. There was a breakup, there was a move, there was a lot of uncertainty, and a lot of uprooting and upheaval. As a result, my mental health was at an all-time low, and I was having a pretty tough time, but I was ready to take back the power and control over my emotions.

Naturally, I wanted to end my 2018 on a high note—calm, collected, and ready to take on a new (and hopefully less terrible) year. Most importantly, I wanted to feel powerful again. While my original plan wasn't to do so with a snake massage, I'm pretty glad I stumbled across Serpentessa before the year was over.

There are a number of reasons why you might choose to get massaged by snakes, but the main benefits include helping you connect to your inner divine feminine and hone your own power, connect to nature (something pretty crucial for me, leading a busy city life), and find a new source of healing.

As we began, I sat up on the massage table as Serpentessa placed three boa constrictors, one by one, on various parts of my body, allowing them to fully coil and squirm whichever way they felt. Eventually, I was slowly guided to lie down and relax, which is when the actual magic began.

My constantly buzzing brain began to mellow out and quiet down as the snakes constricted over my legs and feet, softly wrapped themselves around my neck, and literally licked my face with their darting tongues—a snake's way of smelling. I wasn't quite expecting to keep my chill while very large snakes were writhing up and down my body, but somehow any initial anxiety or nerves had quickly melted away. Serpentessa chanted things here and there, declaring the snakes and me as being one (or something along those lines), as I drifted into a blissful state of relaxation.

Honestly, it was probably one of the most peaceful and soothing experiences I've ever had. In a way, you're almost forced to be calm, as snakes can sense your fear. And, well, you probably don't want a snake to know you're afraid of it, especially when it's sitting on your chest. This is why those who have a fear of snakes will visit Serpentessa just as often as those who are looking for some good old spiritual healing.

But there's much more to it than the actual massage itself—the symbolism behind it all is what really opened me up to making some serious changes in my life, and made an impact that's lasted well beyond my December session.

As Serpentessa explained to me, prior to snakes being seen as "evil" or as the "tempter" of monotheistic religions, they were seen as symbols for birth, life, death, and rebirth. A snake sheds its skin multiple times a year, ultimately renewing itself many times throughout its life. And, so it's kind of the perfect animal to become one with if you're looking for a bit of rebirth yourself.

Before we even began, Serpentessa walked me through multiple snakeskin sheddings she had held onto. Some were perfect, looking as if the creature easily slid out of its old skin in the most effortless, graceful manner, seamlessly emerging a new and improved state of being. Others were twisted, some coiled, some almost knotted, indicating that, in some cases, shedding one's skin can be a struggle.

This is something I needed to do before entering 2019; I needed to shed all of the shit—pent-up anger, toxic relationships, emotions I hadn't been able to express—that were no longer serving me. Being that I'm literally terrified of the unknown, and change in general, my "shedding" was likely going to err on the side of twisted and knotted. But, if the snakes can still do it, then so can I.

As I left the Brooklyn studio, I felt refreshed, renewed, and, more importantly, ready to let go and have a fresh start.

And so I got to work. I cut ties with toxic relationships that weren't working, while I reconnected with others who deserved to once again be a part of my life. I rested and listened to my body, using my holiday break from work to sleep as much as I wanted and cook myself nourishing foods rather than binge on Seamless. I busted out my journal for the first time in six months and just let it all go. I broke some bad habits, and made the effort to start some newer, healthier ones. For the first time in a while, I felt in control again.

Serpentessa told me to pay attention to my dreams for a couple of days following the ritual. And boy, did I have some fucked up dreams—nightmares, rather. I dreamt I was robbed at an airport of my most precious material belongings. I had dreams of partners cheating on me. For a good week, things weren't very pleasant at night. Whether it's the snakes' doing or purely a coincidence, I'll never know, but ultimately, each one taught me a little more about myself and my deepest, darkest fears, and where I'm headed next.

Embarking on the unknown and letting go of things that have become such a big part of your everyday life—despite how toxic they may be—is terrifying, and despite my Gemini sun, I find that I fear change more than most. But after a roller-coaster of a year, there was no way I could enter 2019 with all of this extra weight—dead weight—that was doing nothing but hold me back.

In 2019, I'm going to take care of myself the very best I can, and hone my own inner power to be the best and strongest version of myself that I can possibly be. And I have Serpentessa and her three boa constrictors to thank for the push that I needed to do so.

Interested in a snake massage of your own? You can book a 75-minute session with Serpentessa and her snakes for $297 at one of her three New York locations: Brooklyn, New Paltz, or Valley Cottage. Better yet? Bring a date. You can book a double session for $535, saving you 20 percent. Do I smell a Valentine's Day you'll never forget, or what? For more information, click here.