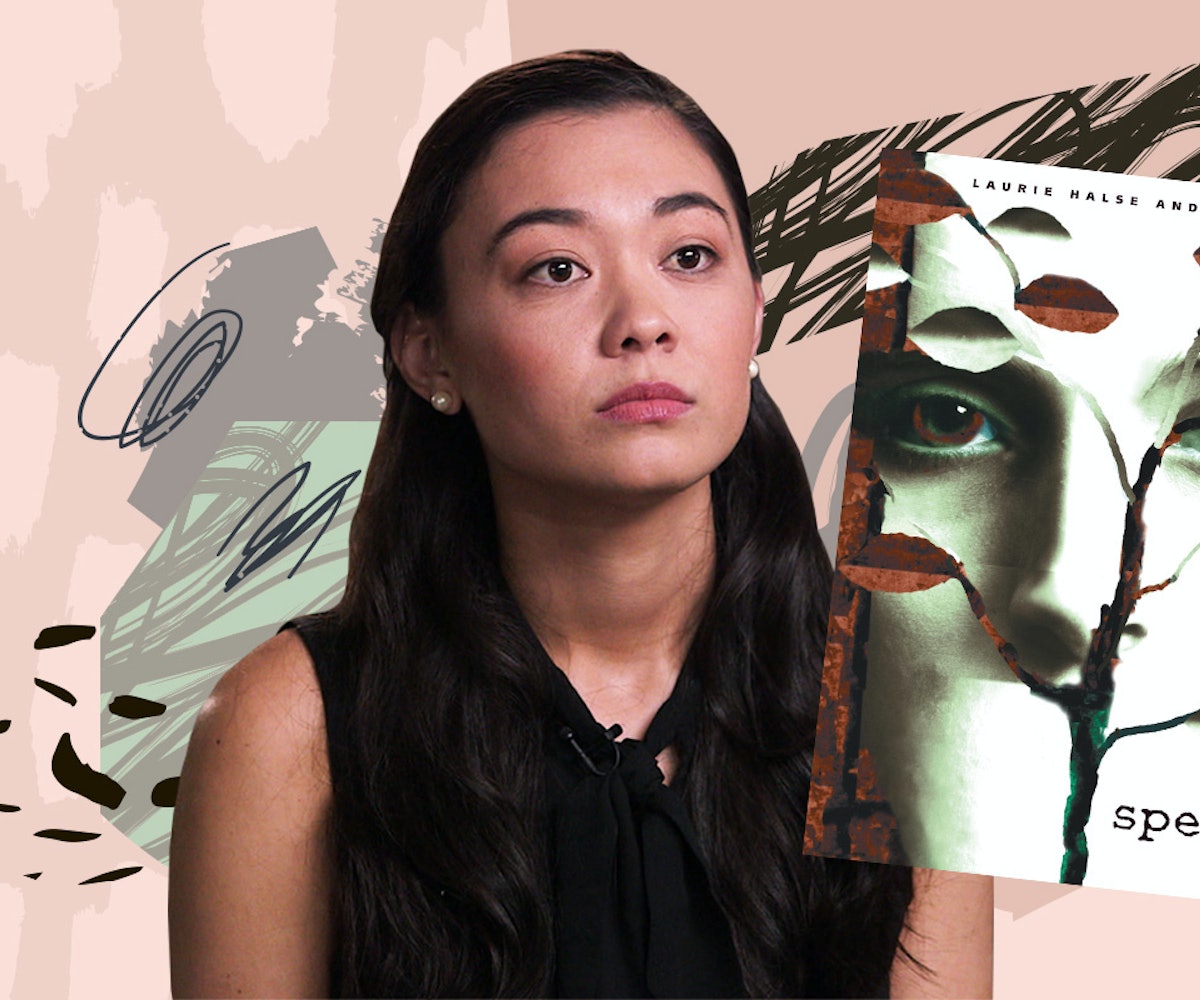 In Laurie Halse Anderson's Speak, Melinda spends art class creating from one word: "tree." Throughout the school year, her medium changes: watercolor trees struck by lightning; carved linoleum blocks; flits of pencil on paper. After Thanksgiving, nearly subconsciously, she places a Barbie head with taped lips atop a turkey carcass.

"This has meaning," her art teacher observes. "Pain."

Now in print for 20 years, Anderson's coming-of-age novel is an integral installment not just in the young adult fiction canon, but among stories that grapple with rape, sexual assault, and trauma. While Speak details Melinda's journey toward healing, Anderson wrote it for her own healing, and in part for her daughters — Anderson was raped at 13, and told no one for 23 years. "When my depression was so severe that I was being a deeply shitty mom for my kids, that's what [finally] sent me to the therapist's office," she says. From those sessions, Speak was born.

When Anderson was in high school, narratives like Speak weren't common — instead, she found escapism in fantasy and sci-fi. Now, alongside contemporaries like Chanel Miller and Emma Sulkowicz, Anderson is in some respects the vanguard of expressing trauma through accessible art.

That's not to stratify them by age; all their art is in conversation with each other. Anderson remembers when Miller's victim statement came out: "The incredible, astounding testament to, simultaneously, vulnerability and strength; Chanel blew me out of the water with that."

Miller now refers to that statement wryly as the "writing sample" that prefaced her memoir, Know My Name ("That's one heck of a writing sample," Anderson says). Know My Name shares Miller's account of her sexual assault alongside the intricacies of the legal system, as well as the psychological impact of both. It stems from the victim statement she read to her assaulter, Brock Turner, in court, that was published on BuzzFeed under the name Emily Doe in 2016. Three years later, Miller came forward publicly on September 4, 2019.

Throughout much of the legal process, Miller felt powerless to the whims of the system. Writing Know My Name was no easy feat: It dredged up the anxiety, depression, and pain from the aftermath of her assault — and subsequent retraumatizing through court proceedings — all over again.

"The relief came when I was able to make everything neat again, and orderly. I could organize everything into a cohesive narrative. All that chaos that I had experienced was now falling into this structure," Miller says. "I could see patterns and phases of when I felt unbelievable rage to long periods of withdrawal, and all those things that didn't make sense to me at the time."

Anderson says readers who pick up stories like Speak or a memoir like Know My Name — as well as Anderson's poetry-memoir hybrid SHOUT, which came out in March — are seeking comfort by "looking for models of survival."

"Things like literature, film, music, and drama can really be lifelines when [they show] characters moving through their own challenges," Anderson says. "When you think about it, this is why 20,000 years ago, all of our people were sitting around fires telling stories. Stories are how we teach experience and tell people what to be aware of, tell people how to take care of themselves after they've been hurt, as well as providing a moral compass."

Miller visits bookstores to self-soothe, and uncannily echoes Anderson's point: "I know that anything I've experienced, my experience is somewhere on the shelves."

"I know that anything I've experienced, my experience is somewhere on the shelves."

"I also understand how difficult it is to disclose your story, to figure out who you can trust, to even put it into words," Miller says. "A book is a very gentle way of engaging in that conversation. It's going to be there for you always. You can come to it whenever; you can control how you want to engage with it."

And what about engaging with these assault narratives? Is it harmful, or difficult, or triggering to engage with art that mirrors your own experience? Miller says that when she comes across sexual assault in art, she's immediately alert.

"It's up to your mind to keep telling your body that you are witnessing a narrative, that you're actually okay in the present, that you're watching a movie, you may be beneath a blanket, you're capable of clicking the remote and stopping everything," Miller says. "But it's very difficult because my body is much louder when it comes to exposing myself to any media that contains a similar story."

She adds, about her own book and similar works: "It's really important to stop while reading, to check in with yourself: Are you holding your breath as you're reading a certain passage? You just have to take it at your own pace and really pay attention to what's happening inside you as you read, because if you're really maybe too in tune with it, you need to take breaks."

When touching upon Emma Sulkowicz's "Mattress Performance (Carry That Weight)" as another example of trauma-borne art, Miller realizes that she and Sulkowicz are the same age. Quite paradoxically, she asks: "How did she get so brave so quickly?"

Sulkowicz first made headlines for her performance art piece in 2014, a year before Miller's assault . In the piece, Sulkowicz carried a 50-pound mattress — identical to those in Columbia University dorms — around campus, and said she would continue to carry it until her rapist was expelled or left the college. Her piece was about "taking what happened to you in the bedroom and putting it out in front of the world to see" as well as the solitary struggle of confronting trauma: "You're carrying the bed alone."

At the time, Sulkowicz says, healing for her meant feeling and expressing more. "It was important to make all those artworks, to get that out of me... but I don't think making that healed me," she says. "Now, I have to redefine healing. For me, healing has to actually be about finding inner peace and quiet." She smiles, with a nod to Anderson: "['Mattress Performance'] was one of the many shouts I had to shout."

"It was important to make all those artworks, to get that out of me... but I don't think making that healed me."

Now, Sulkowicz is in acupuncture school, learning Chinese medicine. "I've shouted enough," she says. "I'm ready to start healing the people who need to be healed after me."

While that implies a clean ending, all three emphasize that healing is by no means linear — after all, that's why Anderson wrote SHOUT 20 years after Speak, and why she says, in 20 years, she may find herself writing another book altogether. While she's encouraged by how much the conversation about assault and consent has advanced in the past 20 years, she frets that that's not enough.

"Are we strengthened, are we encouraged by the fact that it's easier, apparently, at some level, for this generation to come forward and tell their stories, or do we save all that energy and turn it into flaming rage because it's still happening?" Anderson asks. "I don't have an answer for that one."

Anderson believes that every family in the country has been touched by sexual violence, which makes it integral to not only share these narratives but to share a variety of them as they touch upon all communities, sexualities, and genders.

"We need more of these narratives," Anderson says. "The more we can hear about them, it creates opportunities for conversations, which allows for other victims to come forward for the first time. First of all, that gives them some strength and community so they can go get the support they need, but unless and until we start having conversations about this, we're going to keep harvesting generation after generation of victims, because we're going to keep on growing up boys who don't know what the rules are."