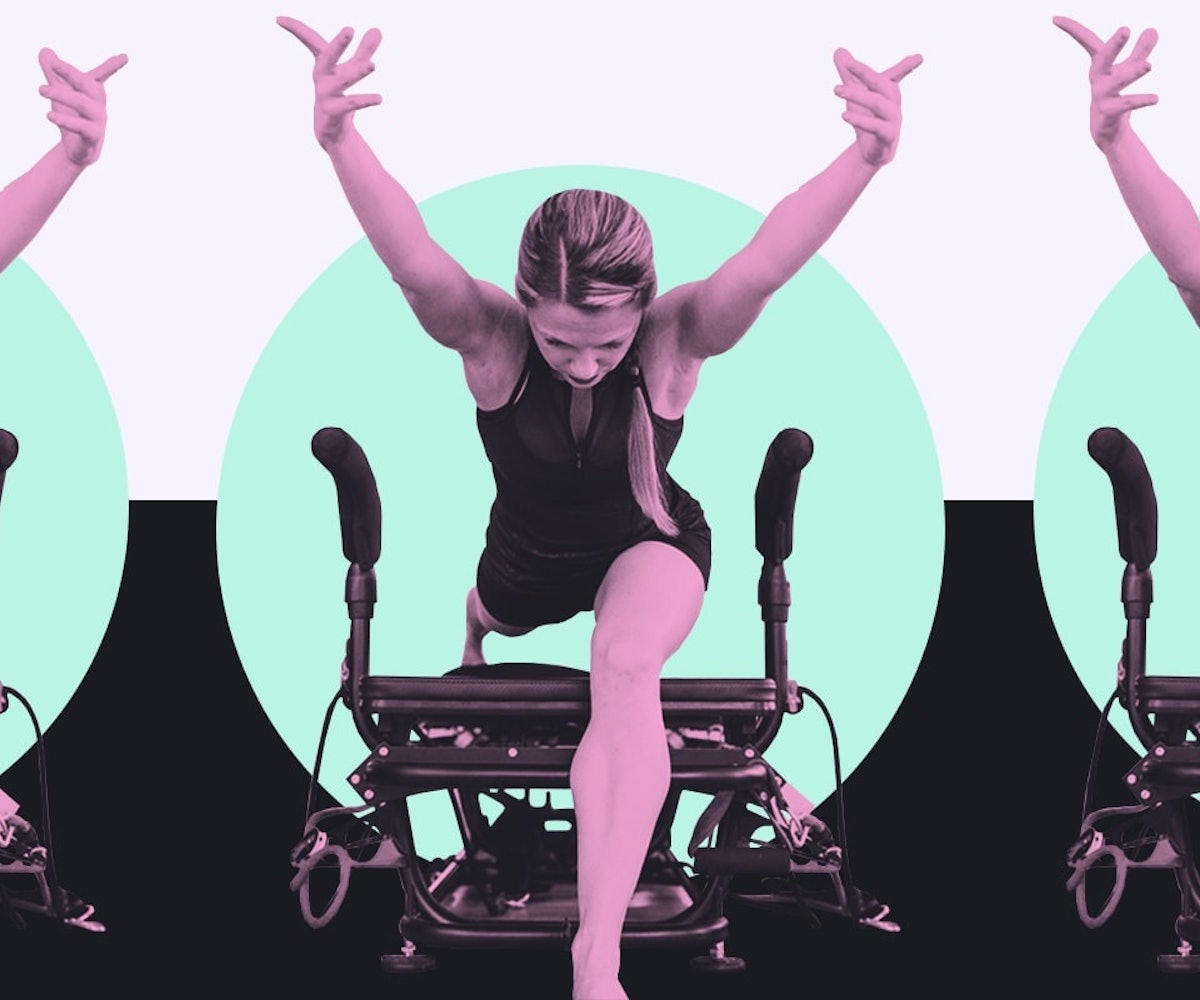 Until this year, I'd always been the type of person who switched up my workouts a lot. Partly because I write and enjoy learning about fitness, and partly because the only way I previously enjoyed working out was by trying something new, but, for a long time, I jumped from class to class, with no loyalty to a workout or instructor. At the end of last year though, I quit the gym and paid upfront to join a barre studio for a whole year. And while there's something to be said about doing the same workout on a regular basis (I love my new morning routine), my body has essentially memorized it and doesn't sometimes exert itself as it used to, leading me to start slacking off. As such, I have taken to seasonal "challenges," like F45's 8-Week Challenge, to reset my body and mind. This time around, I took SLT's new Spring Challenge.

Now, I know that, for some people, nine workouts in 21 days, which is what SLT encourages, may not sound like a lot (it is to me, though), and I also know that among the workout-savvy, the Megaformer, the machine that SLT uses, is nothing new. Yet, almost a decade after Sebastien Lagree first introduced and franchised the machine to various studios and it became a celeb favorite, it's still the consensus amongst fitness fanatics that it remains one of the most challenging workouts around. "It's a full-body workout that combines the best elements of cardio, strength training, and Pilates into a comprehensive, efficient, and effective workout that works every bone in your body. It's your cardio day and your toning day all rolled into one," explains Amanda Freeman, SLT founder and CEO.

If this was enough to get you to Google "Megaformer," you inevitably saw words like "Pilates" and "Reformer" pop up. Stop there: While many are quick to point to the Megaformer as a Pilates Reformer 2.0, to compare the two is to do a disadvantage to both. Because, while the two machines do look alike—there is a "carriage" that moves back-and-forth that's attached to spring loads—and the two are suitable to all fitness levels and low-impact enough for people with injuries, the moves associated with them are very different.

"The Megaformer is an amazingly souped-up, evolved version of the Reformer," says Freeman who also notes that, similar to the Reformer, the Megaformer uses the instability of the moving carriage and the resistance and counter-resistance of the springs to create a challenge. "However, that's where the similarities end. There are a variety of different features that make it a next-level workout, including more handlebar positions, tons of straps, cords, and handles for more variety and increased range of motion, and a larger frame with a usable front and back platform. The Megaformer is one-of-a-kind and in a league all its own."

So while on the Reformer, you work with only one stable platform, on the Megaformer, you continuously switch sides and use the two stable platforms that bookend the carriage. Similarly, the various straps can be used off and on the machine and change depending on what part of the body you're working out. What's more, in private sessions, the machines have the ability to rise up at an angle, creating advanced variations. If that sounds like an intimidating contraption, well... it is. For one, on first glance, the machine looks more like a miniature football field than a workout machine, with lines and numbers marking the different sections where, not unlike Twister, your hands and feet should go. And at the pace that the class moves (read: fast), it's overwhelming to remember all the part names, as well as look for numbers and lines. (While I am not one for introductory classes, first-timers would be best taking an "Essentials" SLT class that gives an overview of the machine, or a private session.)

It also targets muscles that you otherwise would have a hard time hitting. "The SLT workout is known for working muscles you didn't even know you had. In addition to working all your major muscle groups—glutes, hamstrings, biceps, triceps, and core—we are especially adept at working your obliques and abs in a way no other workout can," Freeman says. This becomes very clear when doing even the most basic exercises. While I stopped having trouble with side planks in my barre class, when doing SLT's side plank while resisting the weighted spring, I found myself grunting with effort to keep my body up. This also happened while doing the "Wheelbarrow," essentially a modified plank, which in barre I could hold easily for several minutes. (Yes, "wheelbarrow" is an actual move name; Megaformer has other fun ones like "Spoon," "Mermaid," and "Catfish.")

What also sets it apart is how slow most movements are. So while there are cardio bursts, that involve Mountain Climbers and Burpees (which are, unexpectedly, more fun than traditional burpees on the ground), for most of the time, class participants are encouraged to take their time to avoid momentum. "We work our muscles to muscle failure by working one muscle group for an extended period of slow movements," says Freeman. "Slow movements are the key to the results and effectiveness. We move slowly to activate our slow-twitch muscle fibers in order to achieve the long, lean muscle tone we are seeking." If you think plank-to-pikes or lifting toes while sinking down in barre is hard, trying doing it on the Megaformer at the slowest possible pace. And don't think that you won't break a sweat just because the moves are slow; between the cardio burst and the intense core moves—without any breaks—the 50-minute class will leave you drenched in sweat—and maybe tears.

But what makes the key difference here is that no two classes are the same. While you will usually start with a core-focused warm-up, work out the right and left legs and obliques in two separate chunks that leave muscles utterly fatigued, and have an arm section before finishing with another round of core, the movements vary from day to day thanks to the various straps, core, handles, and weight options (there are eight spring loads in total that you can mix and match), something that a Reformer or other workouts don't allow without the use of a lot of equipment. "We pride ourselves on delivering a constantly changing workout that will continue to challenge and surprise your muscles," says Freeman. "You never plateau, you just keep taking your variations on moves further and further. There are always options for advancing a move, whether it's changing up the spring load, the pace, or your body positioning. It's always a challenging workout."

All to say, after the challenge is done, you'll be happy to return to your workout routine.