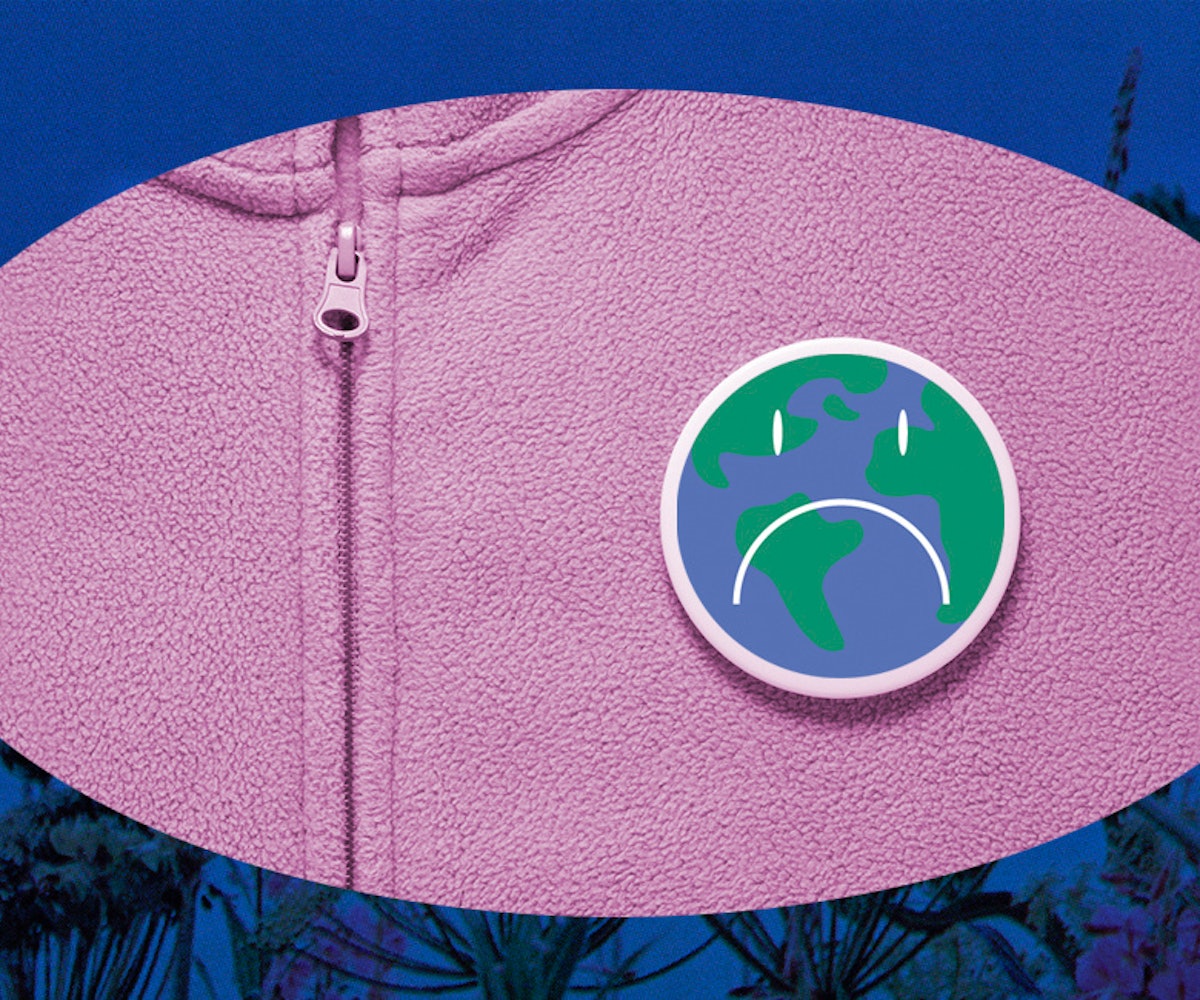 As of a few years ago, we all learned how bad microbeads—you know, those tiny exfoliators that used to be in beauty products like face washes—are for the environment. Once word spread about the harm microbeads were doing to the environment, legislation was passed to ban their use.

But, microbeads aren't the only villainous material out there: Even though similar legislative actions have not been taken against all microplastics, like sequins and glitter, they're just as bad. But there's another microplastic that we should all look to avoid: synthetic fleece, which poses a real environmental danger thanks to the lint that it makes while it's being washed.

When you do your laundry, your clothes shed; this is why dryers have lint-traps. But when a piece of clothing made with synthetic fibers sheds during the wash cycle, microfibers from the clothes get washed away with the water and have the potential to wind up in the ocean. And, since those tiny pieces of plastic can't break down and decompose like natural fibers, their buildup sticks around—and has a huge impact. Charlotte Birkmanis, a marine biologist, explained to me that "an astounding 35 percent of microplastics in our oceans are from the laundry of synthetic textiles."

Part of the problem with these materials is that not only do they shed, but they shed a lot. Birkmanis told me that, according to a 2016 study, "over 700,000 plastic fibers could be released from the average load of laundry, with up to 40 percent of this entering our waterways." All those microfibers add up to a whopping 85 percent of washed-up man-made debris, she said—and that doesn't even include how much stays in the water.

Citing another 2019 study, Birkmanis noted that "only 6 percent of plastic entering our oceans is visible," and the tinier a piece of plastic is, the easier it is for marine life to consume it. "These particles can cause both chemical and physical imbalances in the animals," she pointed out, "resulting in issues with growth and reproduction, and gastrointestinal blockages. Microplastics can even lead to starvation, with the animal feeling falsely full with a belly full of microplastic."

And it's not only sea animals that wind up consuming these microplastics. "It's even in our drinking water," said Birkmanis, "with 83 percent of tap water from five continents containing plastic particles, and 93 percent of water containing microplastic." Plus, she added: "These particles could spread disease, as microplastics provide habitat for microbes to colonize."

While it's definitely up to the companies making clothes out of plastic materials to stop this practice, there are also simple solutions that we, as consumers, can take. "Natural fibers from plants and animals, such as wool and cotton, are a great alternative to plastic fabrics," noted Birkmanis, explaining that they have the ability to biodegrade in soil and water in a fraction of the time that plastic takes. "However, if you can't get away from synthetic fibers altogether, blends such as polyester-cotton fabric shed fewer plastic fibers."

So, check the composition of the piece of clothing you want to buy before adding it to your cart, and if it's not made of something decomposable, put it back. Another thing to pay attention to is the type of washing machine you own, which can play a significant part in how much your clothes shed. "Top-load [washing] machines [release] seven times more microfibers than front-load machines," notes Birkmanis.

And most importantly: Speak out about this issue and demand better from the fashion industry, just as consumers did from the beauty industry when it came to microbeads. Birkmanis pointed out: "Microbeads garnered a lot of media attention, and people cared enough to get involved. The people had a voice, and governments found the will to implement blanket bans on microbeads." But, she finished, "All plastics are a pervasive problem, that we all need to get behind to help solve."