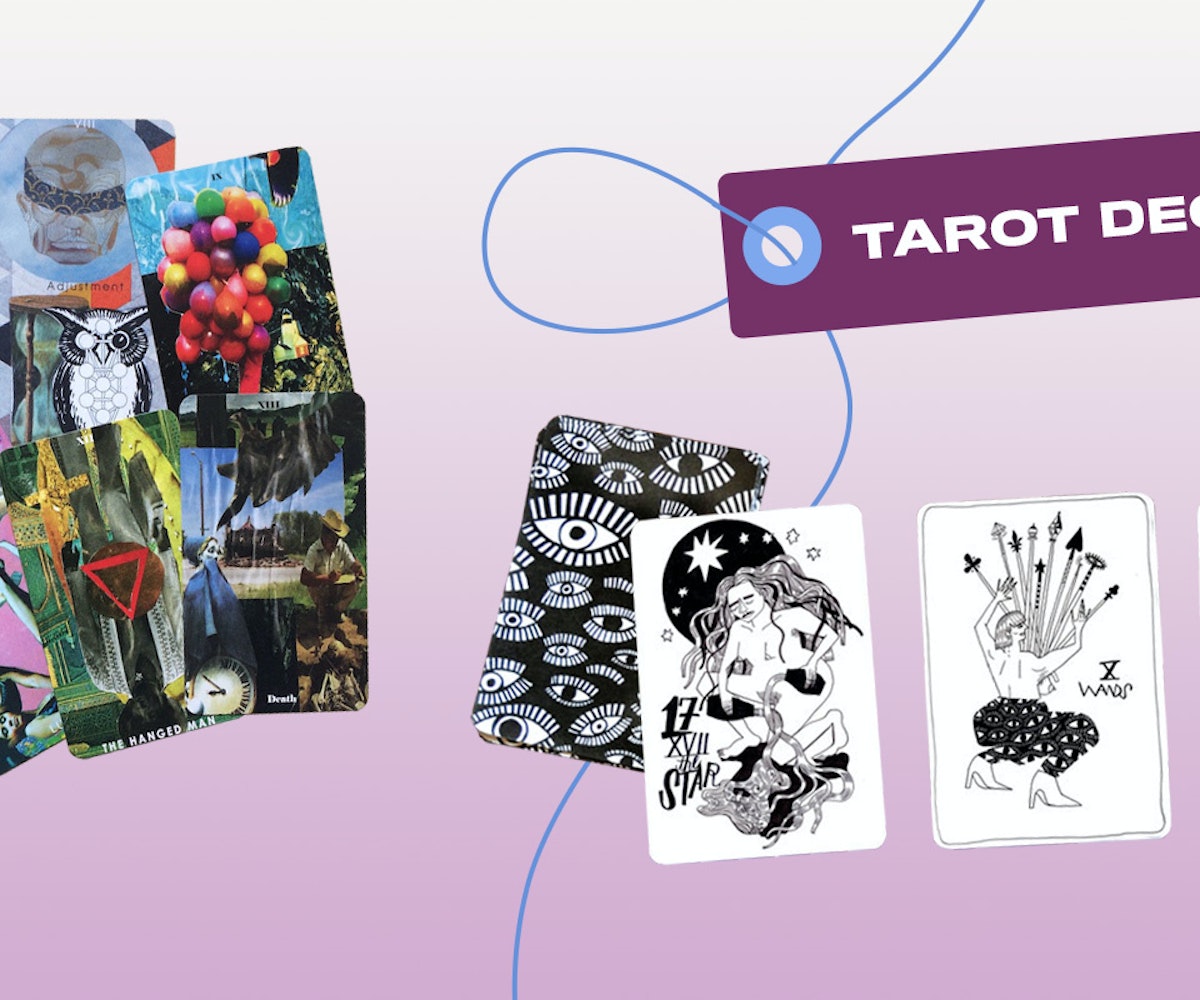 'Tis officially the season for gift-giving. For us, that's a full month in which we'll be providing gift ideas for everyone on your list with our Unwrapped holiday gift guides. So make your holiday shopping a breeze this season, and let us help you find gifts for all the people in your life.

Looking for the best tarot cards to give the most astrology-obsessed and metaphysically leaning people on your list this holiday season, but not quite sure where to begin? We're here to help. We tapped our resident astrologer, Gala Mukomolova to suggest a tarot deck for every astrology sign.

Thea's tarot is one of the oldest feminist tarot decks. Aries is the sign of young rebellion and deserves a deck made by feminist artists that paved the way for more modern queer decks today. Plus, Thea's Tarot can be paired with a revised companion book called She Is Sitting in The Night which aims to re-imagine these books further. Here is a description of the Child of Wands, "Her arms are in the air. She is wild! It's pretty fun being her! Here is someone optimistic, and probably reckless. Who knows if she meant to have half her chest hanging out of her dress, but she doesn't care either way. She is cool."

Listen, I know what I know, and I know that Taurus loves an elegant and simple design. The description reads, "In a true moment of flow, she (Nicole Em) designed almost the entire Major Arcana in one sitting. As a student of letterpress printing, Nicole has a deep love of letterforms and a belief that typography is simply full of magic." If you have ever seen a Taurus get to work, you have witnessed exactly this kind of tenacious unyielding magic energy flow.

I'm not saying all Geminis are sluts; I'm just saying that if you love a Gemini slut, you should consider buying her this tarot deck. Vibrant and a little chaotic, these cards are perfect for the femme-identified Gemini in your life. In describing the arc of the deck, the artist writes, "In the Slutist Tarot's narrative, The Maiden is hungry for experiences but has little foresight and she is prone to mistakes driven by desire and ego."

"In Judaism feelings are considered angels, so when you have a feeling it's an angel visiting you." Cancers are full of feelings, and these beautiful cards are an oracle deck that follows the phases and energies of the moon, created by Jewish Priestess Rebekah Erev. Cancer is the zodiac sign linked to the moon and, also, the sign that rules over the breasts! This beautiful and boobtastic card, which is also available as a poster and speaks specifically on sexual autonomy and reclamation, is reason enough to gift your Cancer this deck.

I thought long and hard about who should get this gorgeous classic deck. It would follow logically that Aquarians deserve the Aquarian deck, but, to my mind, it seemed counter-intuitive to offer the same exact energy to a sign that seems to wield back to itself as an intuitive tool. As the polarity to Aquarius, Leo would benefit a great deal from the magic of these cards—a power that is likewise strong and self-assured but cool-tempered and invested in a collective vision.

While some people might associate Artemis with Sagittarius—given the bow and arrow—there's something to be said about Earthy Virgo's relationship to the goddess of the hunt, whose cults were full of women pledging to be virginal maidens of the forest. The animal world and its mysteries have something to teach the routine-seeking Virgos of this world. The attention to clean lines and bursts of black-and-white interpretations against colorful backgrounds doesn't hurt, given Virgo's predilection for sharp contrasts.

Many Queens Tarot is perfect for a Libra who is attuned to her own Libra magic. This deck speaks both to Libra's dark feminine power and their pleasure in balance and aesthetic restraint. Describing her intentions behind making this deck, artist Lettie Jane Rennekamp writes, "I'm trying to rewrite the word 'feminine' for myself, so it doesn't mean passive or weak, but strong and empowered. The characters in this deck blend the boundaries between gender, sex, family, friendship, shape and size. I love the beauty in our differences."

While some contend that snakes are the symbol of "unevolved" Scorpios, a wise practitioner knows that all animals have wisdom, and snakes are potent magical transformers. On her inspiration behind this Medusa-themed deck, artist Casey Rocheteau writes, "This tarot deck is a celebration of blackness. The name 'Shrine of the Black Medusa' is a play on the idea that some ancient Greek sources identified the Cape Verdean Islands as the home of the Gorgons. Hair like snakes? Eyes that can turn enemies to stone? We're at a point in history when black death in America has created narratives time and again vilifying and making monsters out of unarmed innocent black children. This deck is a call to complicate the trope of the magical negro and embrace our own fearsome and powerful magic."

Shop: Shrine of the Black Medusa

If you don't know a Sagittarius that owns a collection of self-help texts, then you don't know a Sagittarius. They might be adventurous thrill-seekers in their youth, but as these fire signs settle into their lives, they settle into their psyches as well—swerving their curious spirit toward self-exploration. While most tarot-enthusiasts will gladly claim that working with the tarot is a great way to practice self-reflection, these cards were made with the explicit intention to give non-mystics the opportunity to approach the practice from a self-healing perspective. Your Sagittarius will appreciative a framework that allows them the freedom to believe or disbelieve at their leisure. The abstract and colorful illustrations by Daiana Ruiz featuring unwavering and fierce figures only amp this deck's Sagittarian appeal.

A very new deck on the scene, completely devoted to re-working an old foundation with reverence for what came before, The Modern Witch Tarot deck is perfect for your Capricorn witch. Capricorn is a hard-working Earth sign ruled by Saturn, a planet that believes in a disciplined approach to knowledge and creativity. Capricorn loves a tradition they can claim and make their own. This deck, by illustrator Lisa Sterle, merges the symbolism of the traditional Rider-Waite-Smith deck with dynamic and diverse representations of the people who come to the Tarot for their divination and self-reflection needs.

It's not unusual for people to get confused about which element Aquarius represents because of "aqua," but it is a fact that this powerful fixed sign is associated with air. The air that bears the water. What a concept! There's something cosmic about Aquarians. Something like the Star of the Major Arcana, hanging in the dark night, pouring water into streams. You know how the moon pulls the tides? Well, the tides are the winds beneath the waters, aka Aquarian forces, and these moon-themed cards look like just the thing to pull our favorite Aquarian in. Plus, this deck depicts alien babes looking cute as heck and doing who knows what in the wilds of outer space.

Truth is, a Pisces could vibe with almost any tarot deck because they're open to cosmic messaging in all forms. Still, I think there's something very Piscean about a deck called The Next World, given that Pisces rules the 12th house—the end of separation, the full turn of the wheel—and the preparation for a new world. Plus, these cards feature the artist's queer community and are moody as hell; what more could a water babe want? Liberation? Alright, check out this description from the artist, Cristy C. Road: "The Fool's Journey is about smashing systematic oppression, owning their truths, being accountable to the people and places that support them, and taking back a connection to their body that may have been lost through trauma or societal brainwashing."