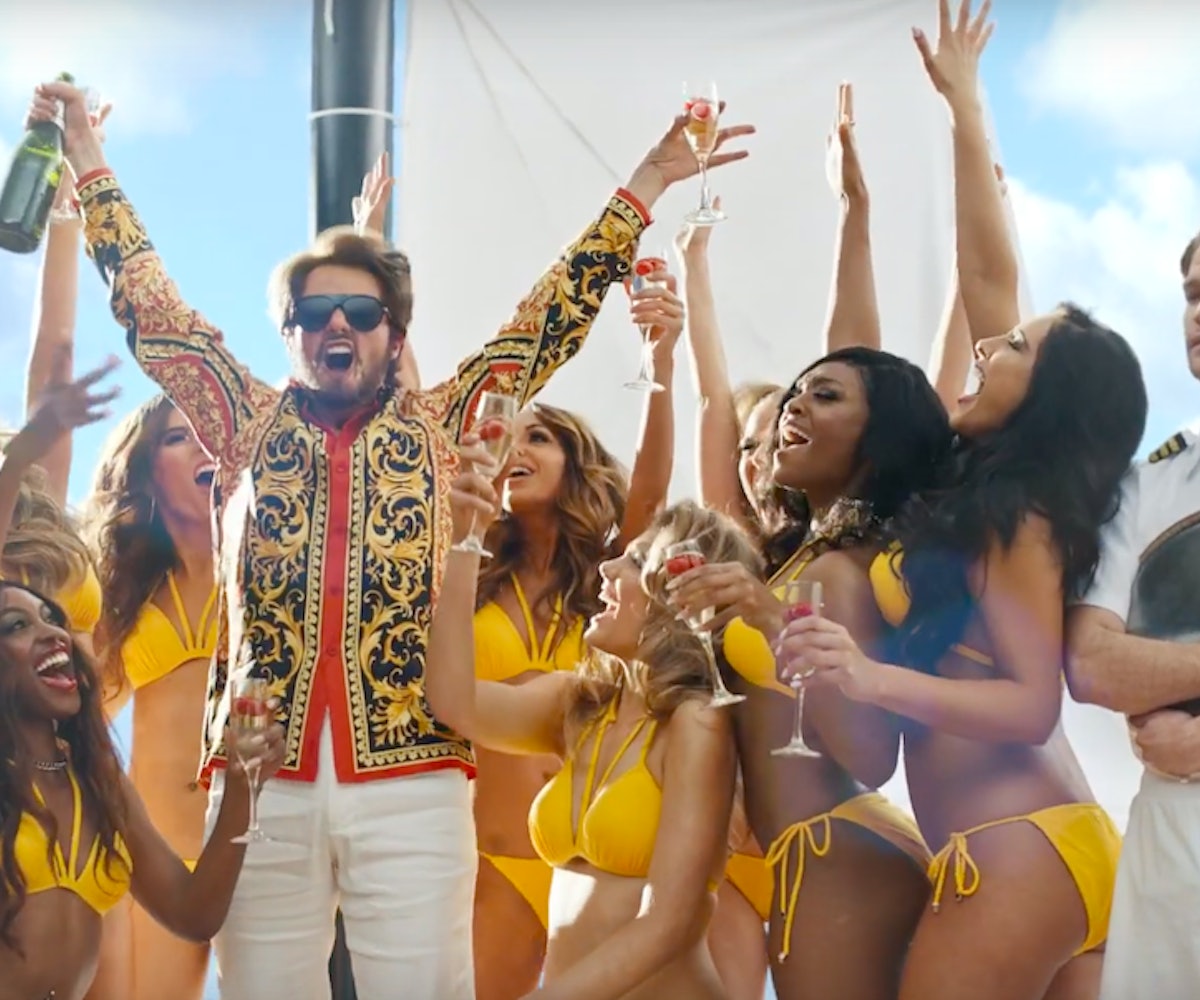 Even with all the transformations Taylor Swift has undergone during her 16-year-long career as America's foremost Country Pop Princess, nothing could have prepared me for the moment she decided to dip her toe in the drag king pond, which she has done in her latest music video for "The Man." And though the character Swift plays is not supposed to be charming or appealing in any way, it must be said that Swift makes for a surprisingly handsome man — a pleasant mix of Jake Gyllenhaal and Leonardo DiCaprio.

As a song, "The Man" is about what Swift imagines her life would look like if she were of the inferior sex. In her words, she would be "complex," "cool," a "fearless leader," and an "alpha type." "When everyone believes you," she asks, "what's that like?" It's a tongue-in-cheek poke at sexism and misogyny.

Fittingly, the accompanying music video finds the singer envisioning this by embodying one of the most "Man" types of men there is: a wealthy CEO-type. He runs around his office barking at his employees, who then cheer him on. He paces back and forth on a massive yacht yelling at someone over the phone, and then a butler brings him a glass of raspberry-filled champagne while a crowd of bikini-clad women dance around him. He manspreads on a subway as he puffs on a cigar, causing an old woman to violently cough from the thick secondhand smoke. He gets off at his station and then whips out his dick to pee on the wall, in full view of the public. He takes his adorable daughter to the park and ignores her until it's time to impress a few women gawking at him from across the way. He plays a tennis game for a women's charity and gets so angry at a referee's call that he bangs his racket on the ground until it's bent into an entirely new shape. When all is said and done, he ends his day at a nightclub, taking body shots, snorting drugs, and getting into petty fights. And finally, 58 years later, when his gray hairline is receding and the sunspots are no longer able to be covered up with expensive beauty products, he takes a trip to the altar where he marries a woman no older than 21. Such is the lifecycle of The Man, Swift seems to suggest.

The music video is expectedly fun, with Swift clearly having the time of her life as she indulges in all the worst traits of male entitlement. It's made even more entertaining by the inclusion of singer and TikTok star Loren Gray, who plays the unwitting woman on the other side of The Man's tennis match. When the video ends, panning out to show Swift sitting in the director's chair, the singer requests that The Man (now voiced by Dwayne Johnson) "try to be sexier, maybe more likable this time" before calling over to Loren to say, "By the way, excellent work out there. That was astonishing." Now that's what I call solidarity!

Watch Swift's self-directed video for "The Man" below. (And before you go searching for his @, remember, it's just Taylor in drag.)