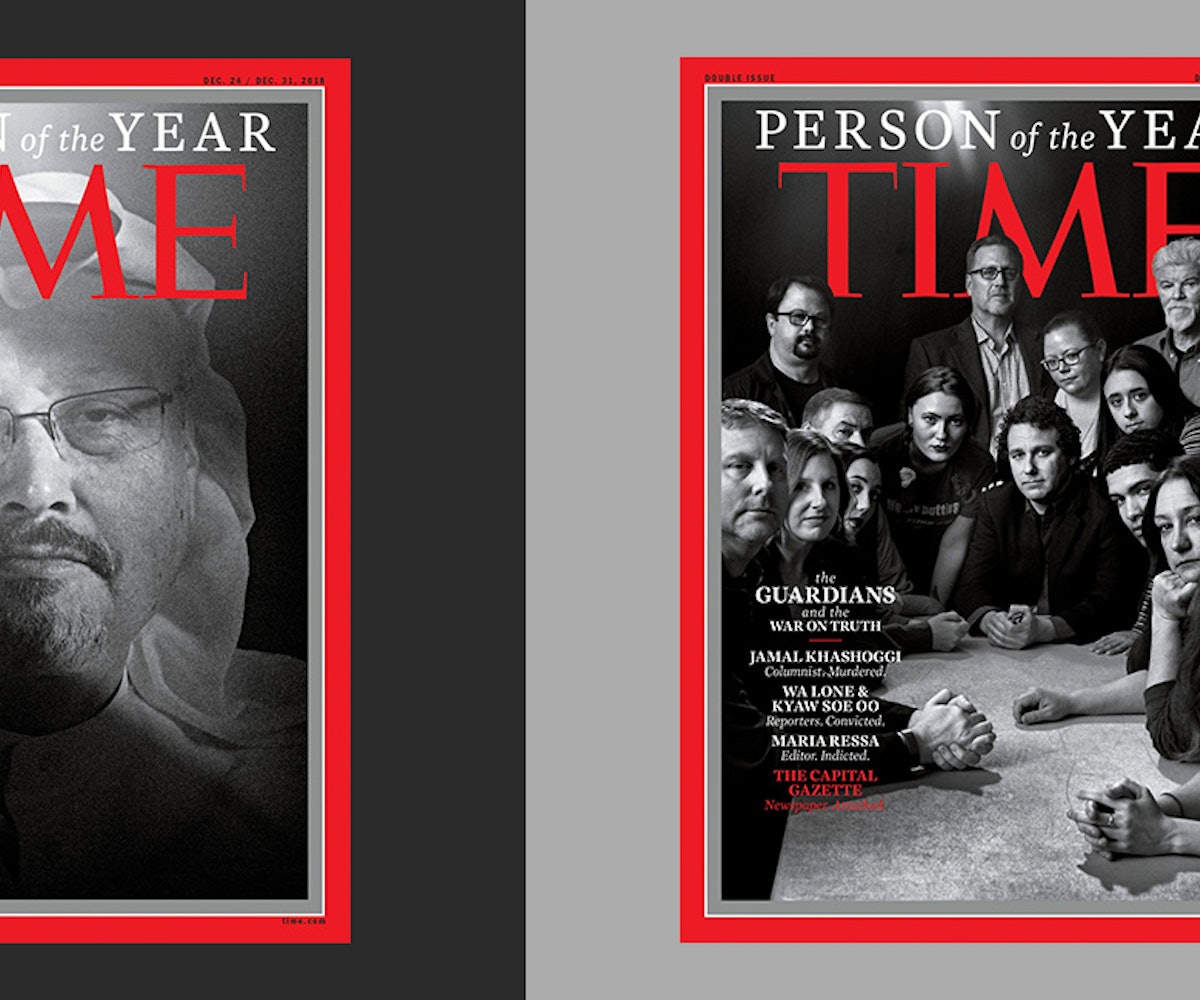 TIME has named "The Guardians and the War on Truth" its 2018 Person of the Year. This includes four separate cover features, highlighting journalists Jamal Khashoggi, Wa Lone and Kyaw Soe Oo, Maria Ressa, and those at the Capital Gazette, all of whom have risked, and many of whom have lost, their lives through their work in the past year.

Writer Karl Vick explains TIME's perspective on how important it is that journalists have stood in opposition to the rise of a new generation of fascist powers, writing:

And in a world where budding authoritarians have advanced by blurring the difference [between tyranny and democracy], there was a clarity in the spectacle of a tyrant's fury visited upon a man armed only with a pen. Because the strongmen of the world only look strong. All despots live in fear of their people. To see genuine strength, look to the spaces where individuals dare to describe what's going on in front of them.

Reuters journalists Lone and Soe Oo remain imprisoned in Myanmar for uncovering a massacre perpetrated by security forces that resulted in the loss of the lives of 10 Muslim men. Their court appearance made it painstakingly clear that the government "pre-planned and staged" their arrests, and that not even the proof of that would maintain Lone and Soe Oo's innocence.

Reesa, editor and co-founder of Philippines news site Rappler, is facing a decade in prison on trumped-up charges by the government meant to "harass and intimidate" the site.

It was painful for me several years ago when several friends were arrested. I said nothing. I didn't want to lose my job or my freedom. I worried about my family.

I have made a different choice now. I have left my home, my family and my job, and I am raising my voice. To do otherwise would betray those who languish in prison. I can speak when so many cannot. I want you to know that Saudi Arabia has not always been as it is now. We Saudis deserve better.

Earlier this year, Annapolis, Maryland paper Capital Gazette was the target of a domestic terrorist attack, and five journalists were murdered. But, in a demonstration of resilience, publishing did not pause because of the attack. Gazette reporter Chase Cook announced on Twitter on the evening of the shooting, "I can tell you this: We are putting out a damn paper tomorrow."

Read the full TIME article here, and see who made the shortlist of nominees (Trump, Putin, and more), here.