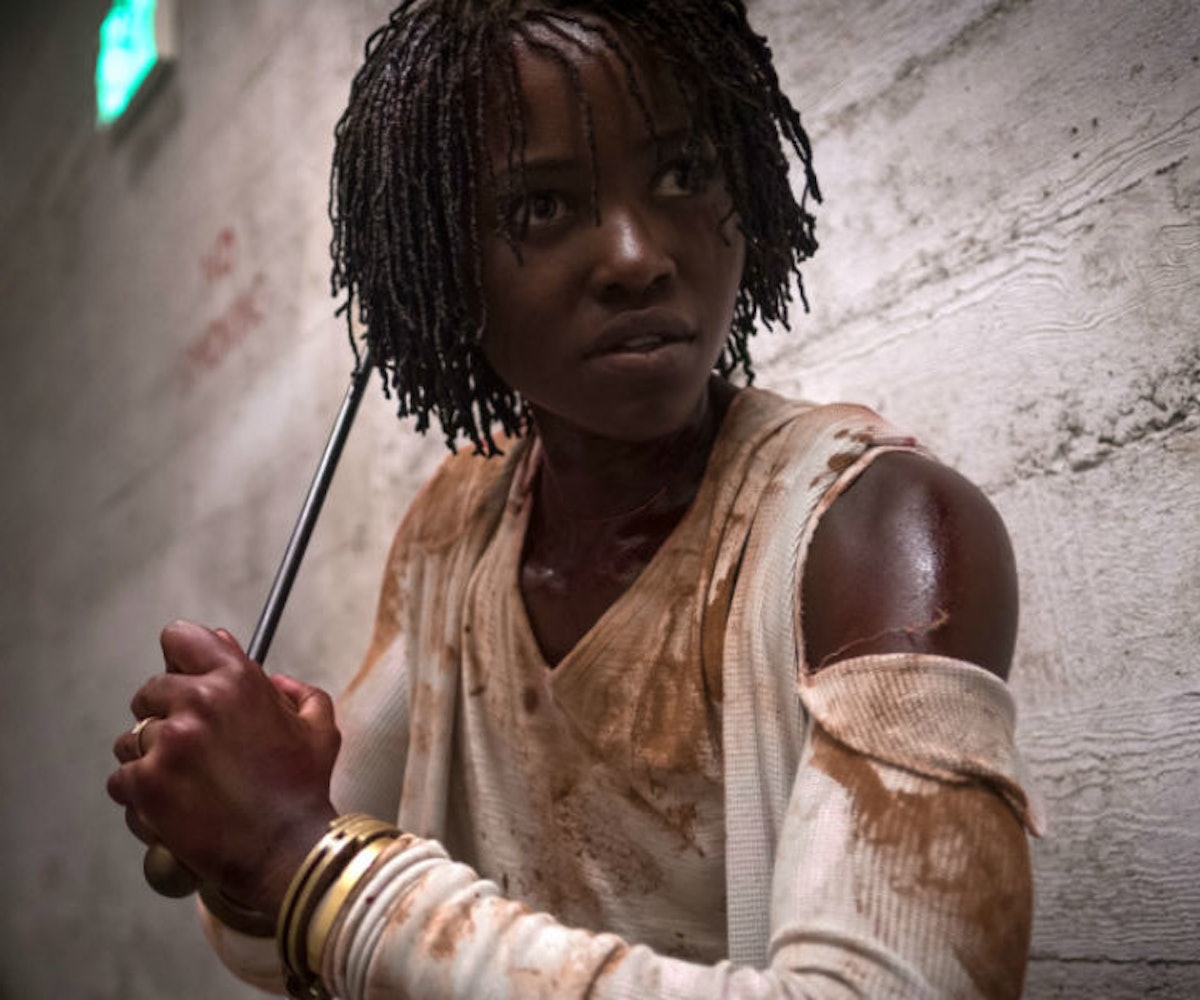 Fashion isn't usually what attracts people to scary movies, but that doesn't mean that horror film's clothes aren't compelling in their own way. In a lot of instances, though the clothes may look simple, there's plenty of symbolic meaning behind them. Such is the case in everything from Netflix's recent The Haunting of Hill Houseto Jordan Peele's Get Out and Us. Clothes are never just clothes, and are actually an important part of the atmosphere of the film. And in horror movies, that atmosphere is everything.

Ahead, we chat with Kym Barrett, the costume designer for Us, about dressing the film's dopplegängers, playing with light, and her work on The Matrix.

In scary movies, the clothes aren't usually seen as the focus. How do you approach what each character wears, knowing the impact will be subtle, but real?

[Us] was my first horror movie, so I kind of approached it as I would any movie, which is asking: Who are these people and what are they doing there? What is their role in the story? Once we had quite a few discussions about the location and the time of year, I knew that light would be a big part of the design and I really wanted to create a kind of yin and yang feeling with the characters. So, the Tethered [the films eerie dopplegängers] are coming from within a dark world out into the world. And the first time we really know something's up, they're kind of like a watercolor, an ink blot, emerging from the darkness. And then the main family are creatures of the light who are drawn into the darkness. So, whenever they're in the darkness, I wanted them to glow so that they were the yang of the story.

I was very conscious of not over-designing anything. I really wanted everybody's characters and personalities to be the most important thing. For people in the dark, I tried to give something that would reflect a little bit of light up onto their faces without them having to be lit anymore than what the DP [director of photography] and Jordan wanted for the mood of the scene. I tried to do things like use lighter colors on our main cast to allow them to be in the darkness for longer. So, it was very moody. It was more of a mood thing than a style.

Ah, I thought Lupita Nyong'o's character mostly wore white and beige as just a way to emphasize the gory nature of the film, since you can see the blood so clearly on lighter clothes.

[Laughs] Well, it's, obviously, that too, but I did want her to be the guiding light in the story. So, every person, even all the Tethered who were down in that underworld, they all had the light. Everyone had it. It's just that it was beaten out of them. I think you definitely feel empathy for the Tethered. You definitely feel that things could've been different for them. I see the design as very impressionistic, and it's using the available light to help the characters.

Yeah, we wanted him to be a typical dad, but also a really good dad. He believes that he's done everything in his power to be a good man. He's gone to a good college, he's looked after his family, he's really created this life where he can afford to give them these little extras—holidays, the boat. He's trying really hard to be that guy. And then, all of that is threatened all of a sudden. And I think in any disaster, personal or physical or whatever, in the moment, your life can be changed, and what do you do? How do you react to that? Who do you become then? I think they all become the next version of themselves in some way, but I feel like he gets to have fun with the way he evolves.

The film's most standout costume is the red jumpsuit. What's the story behind that?

We talked a little bit about utilitarian workwear because, in a way, workwear is made to fit most people. The sizing isn't too specific. So, it was a very good utilitarian option for Red and her followers because it unified everybody in the common cause, which she was the head of.

I shortened the pants to show the ankles and sandals because I really wanted that kind of idea of an exodus of people, almost a biblical exodus. They're coming up out of the ground and traveling across the whole country. I also felt that it conveyed a slightly cultish accessory, the go-everywhere sandal.

This was your first horror film, did you find that it was more challenging compared to other films that you've worked on in the past?

No, I didn't. I thought it was really fun. We had a really great time. I think, also, the team of people always dictates what's going to be challenging about different movies. We made the film really quickly, it wasn't a high budget, it was a fast movie, but everyone was on the same team. We were all playing the same game, so I learned all kinds of fun stuff about horror because I'm not a natural horror watcher.

We made the time to have group discussions with the actors during the fittings. We didn't kind of conveyor belt everyone through. Sometimes when you have hundreds and hundreds of people, it takes up a lot of time. And because there was kind of a smaller cast, it was a really great opportunity to sit down and talk for an hour before we even had a fitting about what could it be and why.

I wanted to talk a little bit about The Matrix because I know the anniversary is this month.

I know, I can't believe it.

Yeah, 20 years is a long time. Why do you think the looks have stood the test of time?

I think that it's fashion's job to change and reinvent itself constantly. We weren't using fashion from that particular time, we were more creating clothes that really worked on the characters and gave them their own style individually. I think that's why it stands the test of time, because it's really character-centric and it helps to support who their character was and works well on the bodies of the actors. It's different than if you see a movie that's meant to be cemented in a particular year. That's its own design challenge, and there are great movies where that happens, but I think this one, it's more fluid, it's more based around character and what those characters had to do. As you know, so many stunts and people were constantly on wires. So, we also had to accommodate massive stunt action at the same time.

Did you ever think those costumes would have the impact that they've had?

I don't think any of us did. We made the movie in Australia and also for not a lot of money. It was a script that wasn't talked about very much, and we just created our own world. In that movie, again, lighting was really important. Something I really enjoy about my job is working with the DP and the lights and seeing how the fabric reacts to the light and what you can evoke emotionally from working with light.

I think one of the things that now I look back at, which I think is really striking, is the world that the Wachowskis created was a really diverse world full of people of all colors and religions and shapes. And I feel like there are a lot of things that have resonance now in the world today. So, I'm kind of struck by that, that kind of echo from joining the past and the present. I think their idea of a great society was something that we're still working on now and hopefully in a better way where there are strong women stereotypes and there are strong women of color stereotypes and there are men who are supportive of that and respect women and are also really striving to do the right thing. So, I know the fashion part kind of comes and goes, but I feel like, for me, that that's the thing that, when I look back 20 years, seems most striking.

Us is in theaters now.