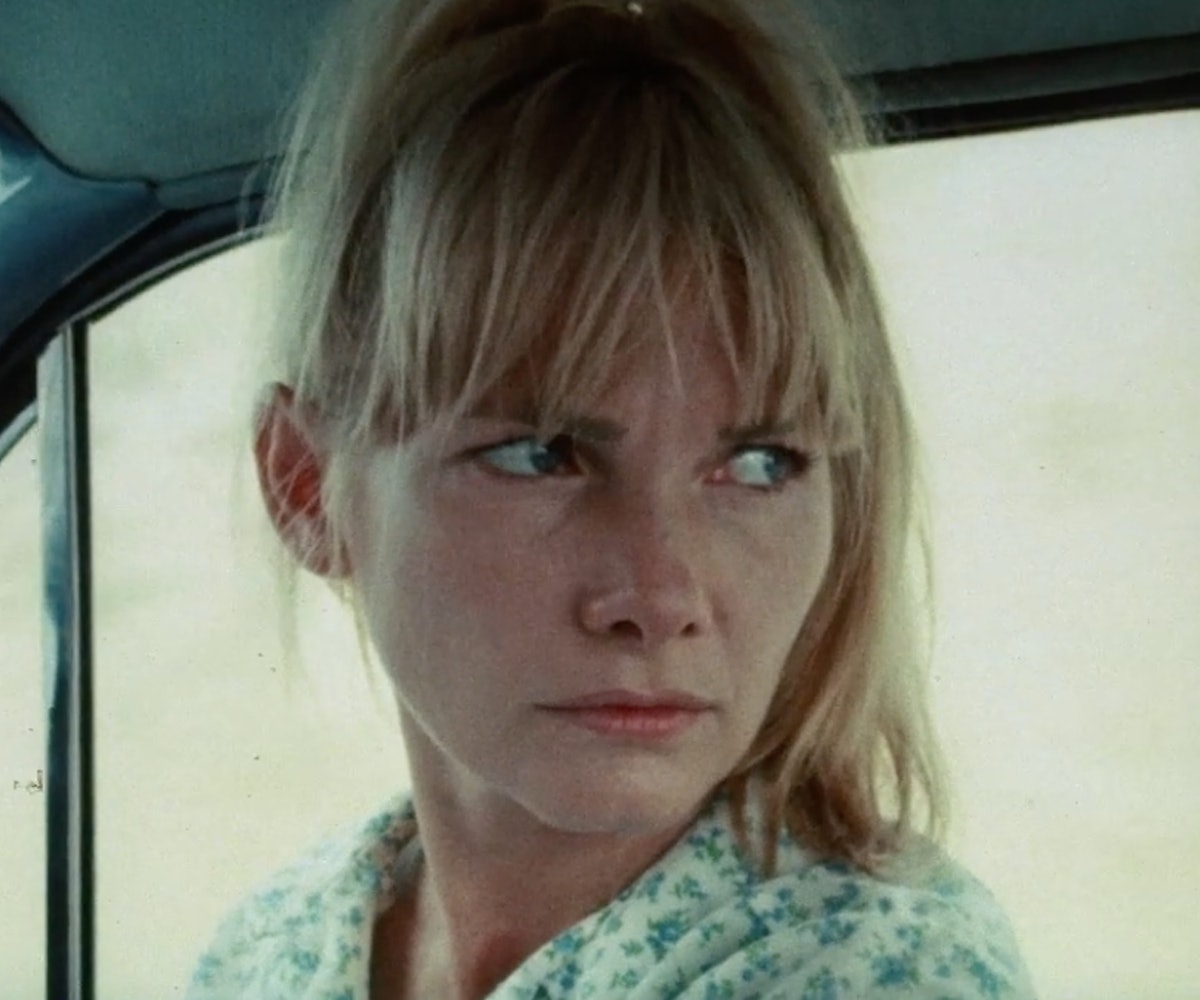 Barbara Loden grew up in the foothills of the Blue Ridge Mountains, and came as a teenager to New York City, where she worked her way up from "pretty girl who gets a pie in the face on a TV sketch show" to "actress valued by Great Men"—who, one suspects, admired her talent without feeling threatened by it. Loden made one movie, which was honored at the Venice Film Festival alongside Orson Welles and Federico Fellini, and she tried to make more without any success in the 10 years she had left before she died of cancer at 48. Wanda, her only feature film—which is, at least, probably the greatest ever made by an American woman, and was finally released last week on a Criterion disc—gives unprecedented tragic dimensions to the life of a woman unmoored from society, without ambition or special gifts, who wanders the world numbly or is pulled along through it by others. Loden wrote, directed, and starred as a character she saw as a dark mirror of herself—a woman she describes as "drifting" and "floating" through life in a documentary included on the Criterion disc, a portrait of her life and work tellingly titled I Am Wanda. The film is a masterpiece that could only have been made by a person who didn't know if someone like herself could ever make a masterpiece.

Loden was born during the Great Depression and was raised largely by her grandparents as her mother looked for work in bigger towns. In another special feature on the Criterion edition, an appearance on The Dick Cavett Show to promote her movie, Loden bristles at the suggestion that she grew up poor—her family, she says, her Southern accent very much intact, is insulted by that description—though a decade later, in a more introspective mood for I Am Wanda, she reveals that her mother nearly had an abortion and that her grandparents were severe and emotionally distant. ("I used to think that I had a very sad childhood. But now, looking back, I'm really glad, because it's what makes me what I am, and I accept what I am.") She moved to New York, where she posed for cheesecake photos (she was Police Gazette's "Date of the Month" for May 1956), danced at the Copacabana, and studied at the Actors Studio. Her biggest stage triumph was in After the Fall, Arthur Miller's thinly veiled portrait of his then quite recently deceased ex-wife Marilyn Monroe, with whose lack of education, hunger for affection, and mix of self-doubt and aspiration Loden identified profoundly.

The director of After the Fall was Elia Kazan, for whom Loden had acted before in the films Wild River and Splendor in the Grass (she plays Warren Beatty's slutty, doomed sister); they were lovers and, later, after Kazan's wife died and Loden got a divorce, husband and wife. (For a deeper dive into Loden's life and career, she's the subject of a great You Must Remember This episode.) Though Kazan, when not big-upping his wife's talent, would sometimes claim to have written the film himself, Loden wrote the script for Wanda based on a newspaper clipping she carried around, about a woman who left her family, fell into a life of crime, and, the story said, thanked the judge who eventually sentenced her to 20 years in prison. She decided to direct it herself after none of the male directors she talked to seemed to understand the character, and eventually an acquaintance offered up the $100,000 she'd been struggling to raise—enough to pay for a skeleton crew, including hand-picked director of photography Nicolas Proferres and a cast of professional actors and amateurs recruited from an open call on the radio. Despite initial accolades, the film fell gradually out of circulation, which, coupled with Loden's early death, made the film a bit of a lost legend until a 2011 digital restoration.

Loden's trajectory from the Actors Studio, Miller, and Kazan to the independent American film of the '70s is a common one—the midcentury American stage, dominated by Method actors, was alternative and then successor to the collapsing Hollywood studio system. That New York theater tradition's socially conscious, bohemian emphasis on sweaty spontaneity and subjectivity led to the emergence of actors who could seem ostentatiously "real," and the kind of material that indulged it, particularly by tapping into new regional and class inflections—like Brando and Kazan's film of A Streetcar Named Desire.

So much of Wanda feels like the negative image of the New Hollywood that followed out from Godfather Brando. In Wanda, all the things that are emblematic of the freedom and vigor of '60s and '70s American film—virtuoso professional and unpredictable nonprofessional acting; depictions of a life of crime and the open road; a new interest in the lives of people like the young Barbara Loden—instead reveal constriction, depression.

Loden herself, as Wanda, reminds me a little bit of the young Al Pacino: a scared, turned-inwards little kid whose voice you have to lean toward to make out. Like Loden, Pacino was a hand-to-mouth New York teenager-turned-Actors Studio prodigy, and difficult as it is to believe now, his early performances capture an almost feral fragility—like in Scarecrow, where he goes on the bum through the kind of flyover Americana, rugged and tacky, then being photographed by the likes of Stephen Shore. Wanda, too, hits the road, though it doesn't take her any further than the immediate vicinity of Scranton, Pennsylvania, never more an emblem of late-industrial American ugliness than in the film's shots of seemingly endless hills of coal and ash, like a black moon. The rooms in Wanda, diners and motel rooms, are filled with sickly formica and bare mattresses, stale beer and sallow people.

Loden's Wanda murmurs when she speaks and has the body language of someone who's been conditioned her whole life: She either looks down, like someone who's been hit before and expects to be hit again, probably soon, or up, with transparent hope of praise. She moves like a person who is physically weak—watch the way she pulls doors open just wide enough to slip through—and her hands stick out from her at birdy, nervous angles. Wanda is always holding something—once she clutches a hamburger, or a pillow, she never puts it down, as if she owns only what she can carry, and has nowhere on earth to put it. Which, as it happens, is more or less true.

We first see Wanda waking up on the couch she's been sleeping on, in bra and panties; this is the morning of her divorce hearing, for which she shows up late. She spends the night with one man, who can't get rid of her quick enough, then sticks to another, played by Michael Higgins, a prolific character actor you'll never again be able to look at without thinking of this role, like when Tony Todd shows up in one of his many non-C*ndym*n roles. "Mr. Dennis"—that's what Wanda calls him—is the pettiest of tyrants, the smallest-time of crooks. And yet, as Loden explains in I Am Wanda, at least he knows that she exists. Even if he berates her for bringing back hamburgers with "junk" on them (onions; she takes them off and throws them in the wastebasket), even if he bullies her into being his accomplice in an incredibly poorly thought-out bank robbery. (With Wanda, Loden, who loved Breathless, gave us both the ultimate proof of and the ultimate challenge to Jean-Luc Godard's claim that all you need to make a movie is "a girl and a gun.") When Wanda looks at Mr. Dennis, Wanda shows you why she stays: the flickers of pleasure when she succeeds in capturing his attention long enough to tease and irritate him; the deep depression of her calculations when he pulls her curlers out of her hair, or throws her new pants out of the car, and she realizes she has no better options. ("No slacks!") Wanda is a very funny movie, but I have to be careful how much I laugh at it: the best jokes are about the brutality and obliviousness of small men. The slam-bam sight gag and slapstick with which Mr. Dennis is introduced as an angry incompetent is as an astonishingly deft compression of an insecurity as deep as Loden's, but without her self-knowledge. Like everything else in the movie, it reveals the writer-director as a fully formed artist at once inside and outside of her own experience. What other stories could she have told?

Wanda is at once a total political film, and entirely apolitical. The broad strokes of cyclical poverty and patriarchy are visible from space, yet moment to moment we're inside the lived experience of a person for whom those terms are basically meaningless. To the extent that Wanda, the ultimate "floater," has a character arc at all, it comes through in the way that new, sharper notes of dissatisfaction begin to clarify within her character—the way that, by the end of the movie, the confusion and woundedness on her face has given way to sadness and anger. The last shot of the film is the moment in the whole thing in which Wanda looks most like Barbara Loden.