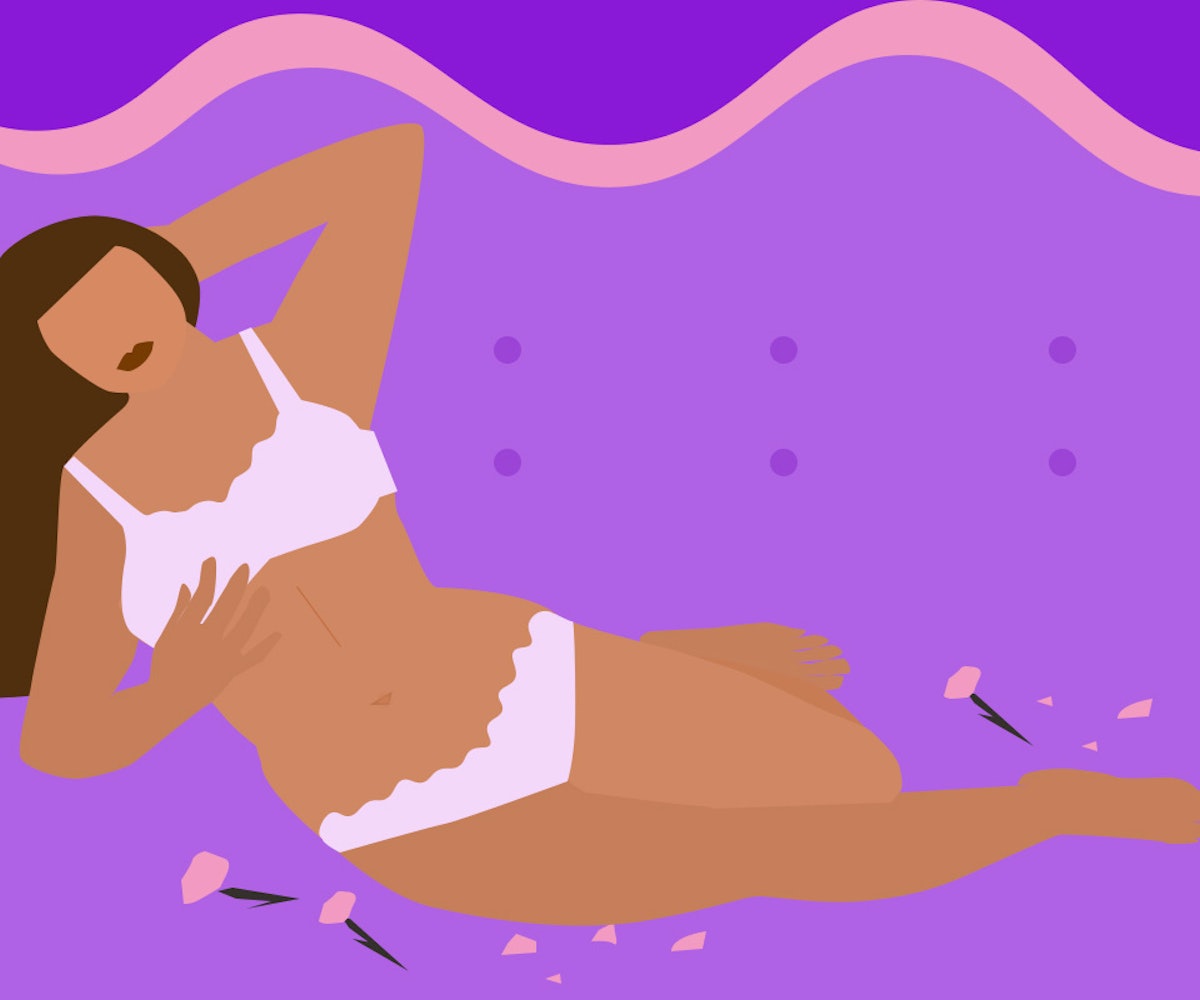 Our genitals are natural wonders. They are self-cleaning, temperature-regulating, epicenters of pleasure. Shakespeare alluded to them with clever double entendres, Georgia O'Keeffe plastered them all over vibrant canvases, and for all of human existence, we have theorized about what exactly is going on down there. While our sexual organs have a slew of hidden talents, one they lack is the ability to accurately communicate our wants, preferences, or level of enjoyment when it comes to sex. Despite popular belief, the way our bodies respond during intimacy is often totally out of our control. The disconnect between your mental/emotional experience of pleasure ("I love every minute of this") and your body's (whether or not your vagina naturally lubricates, for example) is called arousal non-concordance, a term that is vital for any sexually active person to understand yet remains virtually unknown.

Whether you are on the precipice of having sex for the very first time, beginning to explore your sexuality, or even in the throes of marital bliss, there is a very good chance that you have experienced arousal non-concordance, you just might not have had the vocabulary to talk about it.

"The world is somehow convinced that a person's body knows more about what a person wants or likes than a person does," says Emily Nagoski, Ph.D., sex educator, and expert in women's sexual well-being. "This is a mistake we make only when it's sex, even though this arousal non-concordance phenomenon happens with every emotional and motivational system."

Our mouths water when we are hungry, our palms pool with sweat when we get nervous, and our arm hairs stand up straight when we hear the opening chords to Fleetwood Mac's "Silver Springs." Yet when it comes to intimacy, we regard bodily response as something more than just an involuntary reaction to sexual stimuli. We treat it as a sudden unveiling of our secret desires, proof that your partner finds you attractive, a nonverbal "hell yes!" when in reality your genitalia might not match up with your experience of pleasure at all.

Arousal (bodily response), pleasure (actual subjective enjoyment), desire (the act of wanting something), and consent (saying yes or no) are all overlapping but completely different terms. Regardless of perceived pleasure, the only actual way to discern whether or not someone is enjoying themselves and consenting every step of the way is enthusiastic verbal communication.

Physical responses can manifest in a number of different ways, such as vaginal or clitoral blood blow, vaginal lubrication, penile erection, erect nipples, blushing, and changes in vulvar or penile temperature. "Knowing that people can respond automatically or reflexively is really important," says Kelly Suschinsky, Ph.D. who has published academic work on sexual concordance. "If people recognize that a physical response is beyond a person's control (kind of like salivating to the smell of delicious food), then maybe they won't misinterpret physical responses as a sign of consent when a person is not consenting to a particular act."

Arousal non-concordance also applies to situations where all these signs of arousal just aren't happening despite the fact you might be completely into what is happening and totally turned on. If you have ever had a partner get discouraged when your genitalia is not reacting to their touch, know that arousal non-concordance is the culprit and it is in no way a sign that your sex life is passionless and in a downward spiral (lube is a tried and true way to help with this). Despite their rather bewitching qualities, our genitals respond to stimuli in inconvenient times, whether we want something or not.

In the context of sexual assault or violence, arousal non-concordance is especially important to understand. Many survivors might experience involuntary arousal during an assault, and none of these bodily responses replace a lack of consent or discredit the survivor's recount of the events. Despite the fact that this phenomenon has biological backing and sex therapists can speak to its legitimacy, this does not stop the criminal justice system from exploiting people's trauma.

"There are plenty of examples where the defending attorney for a person being accused of sexual assault will make the survivor say on the stand that their body responded because the lawyer wants to say that genital response is a measure of consent," says Nagowski "It's the same old myth! If you had an orgasm, you must've liked it and wanted it and therefore consented to it."

But where did this myth derive? In ancient societies, there are a variety of documents that tie the conception of a child with a woman's orgasm. Even Aristotle wrote about it in one of the very first known sex manuals, called " THE MASTERPIECE AND OTHER WORKS," where he dives into the logic that a child could only be created of a woman's pleasure. Following this idea, the sex was pleasurable and therefore could only be consensual in nature, so every single pregnancy was derived from wanted sex. Despite the fact that we no longer think that a pantheon of gods rule us or that the entire universe revolves around Earth as we did in this era, the idea that arousal is the same thing as consent has remained.

"It's the patriarchy. It's very convenient for men who like putting their penises inside vaginas to declare that it is not possible for their penis to be unwelcome, regardless of what the human connected with that vagina has to say about it," says Nagowski.

If you find yourself scanning through your whole sexual history for moments where partners may have used your body's response as a green light, rest assured that is the case for many of us who have been inundated with problematic notions of sex since our youth. "These scripts are in place regardless of your own gender identity, your partner's gender identity, or your sexual orientation," says Nagoski. Arousal non-concordance affects every human being engaging in any kind of intimate acts. For femme-identified folks whose socialization required a primer on being palatable and non-confrontational, it makes sense that you might mistrust your own experiences of pleasure at the point you are probed with physical signs of arousal. Those of us who were raised as men were taught that they should always be ready for sex, able to summon an erection at a moment's notice. The notion our bodies know best is built on foundation of gaslighting and problematic gender norms that have negative effects on a lot of areas of life.

In reality, this binary is hugely destructive and inaccurate. It comes up in porn, it comes up in movies (most notably in the whipping scene of the cult favorite 50 Shades of Gray), and it comes up in our friendships as well. Having the vocabulary to talk about arousal non-concordance does not just come in handy in your own romantic relationships, but it makes you a more responsible juror and a more compassionate friend. If someone ever confides in you that something sexually traumatic happened but they had an orgasm, you can pass along the knowledge that our bodily response has nothing to do with whether or not you enjoyed it. If your partner gets discouraged, you can assure them that arousal and pleasure are not the same thing.

"Teaching people that a physical response may or may not be paired with mental feelings of sexual arousal or a desire to be sexual should be included in sex ed," says Suschinsky.

Over the last few years, consent has become a well-known concept. There are college classes about it, pamphlets in doctors' offices, and a barrage of #MeToo think pieces that have challenged our culture to reckon with the way it has treated survivors of assault in the past. With these terms entering our collective lexicon, came a cultural awakening around the way power dynamics and impacted sexual relations. Many of the stories were horrifying and convinced survivors for years that they were complicit in their own trauma, in so small part for the roles their bodies natural response mechanisms may have played in the story. There was talk of a gray area with many #MeToo stories where we heard rumblings of "she was really into it" or "how could it have been nonconsensual if x, y, and z happened?" The answer to all of these scenarios is that our genitals cannot give consent, we do. It is high time arousal non-concordance become a commonplace term, was taught in sex ed, and made its way into our day-to-day lives so that this myth of arousal equaling consent stops circulating. Sex will be better for it.