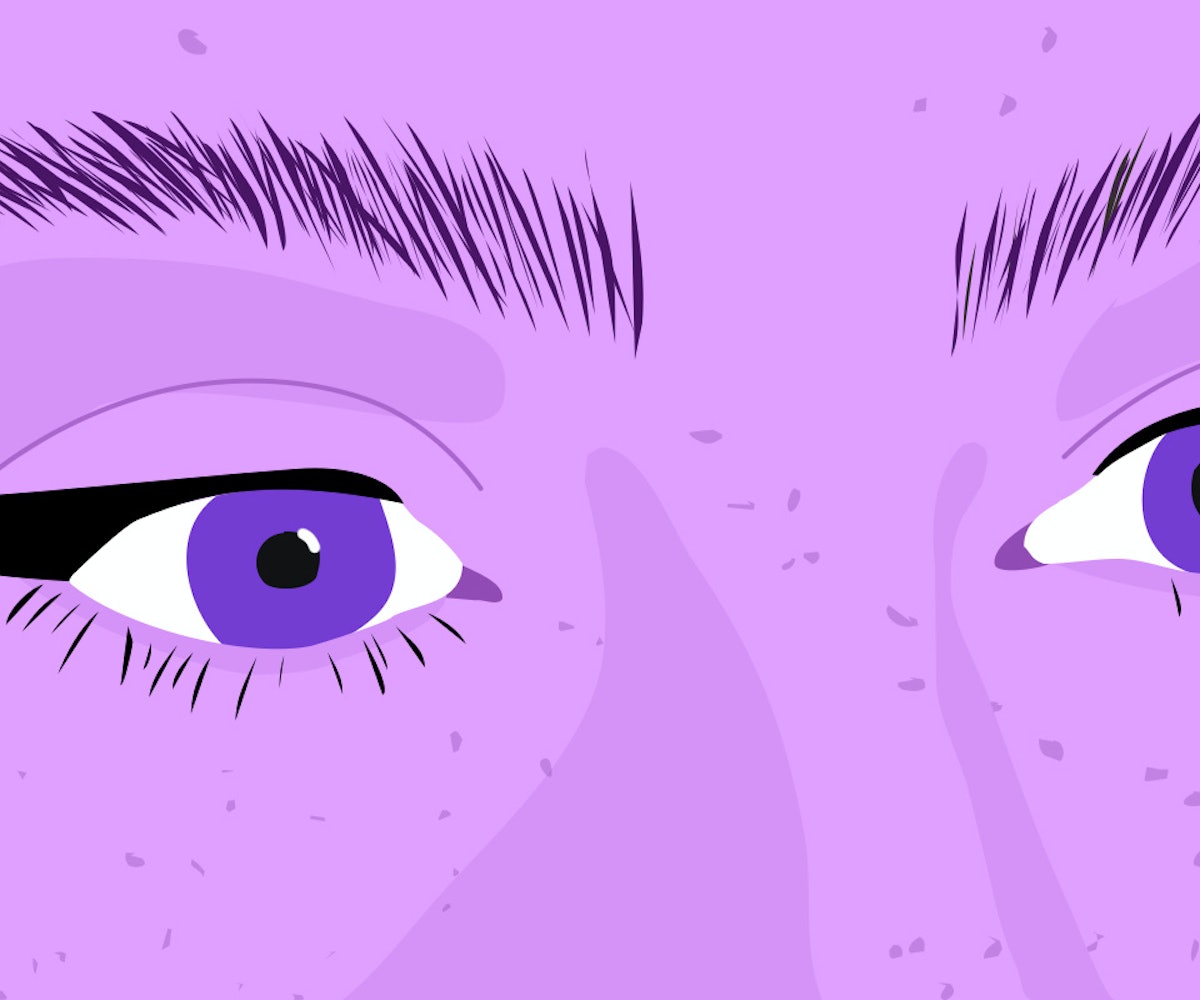 Of course, that's just an opinion. If you like the smooth, defined look of a laminated brow, live your life and laminate! The trend is a hit with beauty editors and influencers, and they've effectively flooded the internet with articles and Instagram posts detailing how it looks (unusually glossy), how much it costs (about $50), and how long it lasts (eight-ish weeks).

But one thing's missing from every single "Everything You Need To Know About Brow Lamination" feature: a list of ingredients that are in brow lamination formulas, many of which ring alarms for experts and clean beauty fanatics alike — including one used to cement oil wells.

Wait, Brow Lamination Does What?

"Brow lamination is a 60-to 75-minute keratin treatment that can turn unruly and thinning brow hair to a more tamed, thick, and full look," Giselle Soto, a celebrity brow artist who works with Normani and Jordyn Woods, tells NYLON. "The end result will mask sparsity and hide small gaps while giving the illusion of major hair growth." Think: Brazilian blowout for your brows (although the treatment actually originated in Russia about three years ago).

The three-step process is "similar to microblading but without the needle and longevity," adds Niki Metz, the resident eyebrow expert at Nine Zero One Salon in Los Angeles. "The first step is a lifting agent, which breaks down the bonds in the brow hair and gives the ability to brush the hairs into the desired shape." The second step sets the new shape in place "using a neutralizer that reforms the bonds" — aka, the "laminator." Finally, the area is treated with a hydrating mask.

How Does It Work?

That's a great question, but you, as a consumer living in the United States, have no legal right to know. It's a secret, sorry!

Blame a loophole in the Food & Drug Administration's ironically-named Fair Packaging & Labeling Act (FPLA): "Cosmetics not customarily distributed for retail sale, e.g., hair preparations or make-up products used by professionals on customers at their establishments, are exempt from … ingredient declaration," it reads. In layman's terms, ingredient disclosure is not required for products that are sold directly to professionals and used in a salon setting. Even aestheticians have no idea what's inside the brow laminating kits they use on their clients. "I don't know the exact ingredients," Metz says. "It's made in Taiwan."

As a "clean beauty"-obsessive and someone with skin about as sensitive as a millimeter-thick slab of semi-permeable living tissue can be, I'm kind of a stickler about ingredients. The fact that Metz didn't know, and the FPLA said I didn't get to know, only made me want to, you know, know.

I reached out to salon suppliers and scoured the internet for safety data and turned up ingredient lists for three professional-grade brow lamination kits from MEI-CHA, Intensive, and Innovator Cosmetics. There isn't much variation between formulas. All of them feature — surprise! — suspected carcinogens, endocrine disruptors, allergens, and irritants.

What You're Putting On Your Brows

Step one of brow lamination relies on either thioglycolic acid or ammonium thioglycolate. "Ammonium thioglycolate is what allows the perm to straighten the hair," aesthetician Mary Schook tells NYLON. (You may remember the ingredient from the climactic courtroom scene in Legally Blonde.) "But it actually can weaken the hair, leaving it vulnerable to breakage, or even cause hair loss over time." According to the Consumer's Dictionary of Cosmetic Ingredients (CDCI), thioglycolic acid behaves the same way: It's listed as a "hair straightener," but side effects include "hair breakage." Schook notes both substances can cause "dermatitis or blisters" and are "not a good idea for anyone with sensitive skin."

Once the brow hair is straightened, it needs to be set — or glued — in place. In Innovator Cosmetics' formula, this is achieved with polyvinyl alcohol, a sometimes-irritating adhesive used in peel-off face masks, the aforementioned oil well cement, and actual paper lamination. MEI-CHA does it with a blend of sodium bromate (known to cause redness of the skin and eyes) and disodium phosphate (a thickening agent more commonly used in nail polish, per the CDCI).

Petrochemicals — substances derived from petroleum and natural gas, a la plastic and diesel fuel — are present across the board, as well; from PEGs (possibly contaminated with carcinogen 1,4 dioxane, according to the FDA) to phenoxyethanol, possible skin irritants like propylene glycol, and ingredients classified as "toxic or harmful" on the Environment Canada Domestic Substance List, like tetrasodium EDTA.

It's hard to find a single undeniably safe ingredient in any of the three products. All feature quaternary ammonium compounds, a category of skin irritants and asthma triggers. Innovator Cosmetics preserves its formulations with parabens, suspected hormone disruptors that infiltrate breast tissue. The kit that Soto uses (she declined to share the brand name) features triethanolamine, a substance the CDCI calls "the most frequent sensitizer among the common emulsifiers used in cosmetics." Intensive formulates with p-phenylenediamine, which "may produce eczema, bronchial asthma, gastritis, skin rash, and death." The substance is banned in the European Union and Canada, but not in the U.S.

"Most of these ingredients are preservatives," Dr. Nava Greenfield, M.D., a board-certified dermatologist, tells NYLON, and to be fair, preservatives are necessary for preventing the growth of bacteria and mold. But "an abundance of caution should be used when using products close to the eye or eyelids," the dermatologist says. "In brow laminating, these ingredients will be used on a semi-permanent basis, which makes their potential for causing irritant reaction even greater."

The treatment hasn't been evaluated for safety by the FDA, and Dr. Greenfield and Schook strongly suggest skipping out on brow lamination. That said, people get ill-advised, controversial cosmetic treatments all the time without (visible) consequences. Think: brow tinting, lash tinting, and lash lifts.

Is There Another Option?

"Pretty much any brand that's on the market... primarily uses the same ingredients," Soto says, and sadly, there isn't a "clean" or natural brow lamination option available at the moment — and there probably never will be. Brow lamination requires ingredients powerful enough to break down the bonds in your brow hairs, manipulate them into unnatural shapes, and keep them that way on a semi-permanent schedule. There's no natural way to do that.

"Being a total skin freak, I would be lying if I said there isn't a chance of skin irritation," Soto admits. "However, if the process is done properly, it should not result with any bad effects. Over the last several months of servicing hundreds of clients, I have yet to receive any negative feedback about the service or the products."

Metz points out that brow lamination is not for everyone, and particularly not for those "with a history of skin disease, trauma, abrasions, or burns to the immediate area; with a history of adverse reactions to brow waxing, tweezing, or sugaring; with an eye infection or inflammation; with little to no brow hair; who's had a recent facial; who's used retinol or retinoids within the past thirty days; or with overly sensitive skin."

If brow lamination still seems like something you want to try, look for a brow artist who is fully aware of the ingredients in the products they use, and who is happy to share them with you. I recommend cross-checking those ingredients with the Environmental Working Group's Skin Deep Database before your appointment, just to make sure you're comfortable with the potential risks. And if a salon supplier or aesthetician won't level with you? There's probably a reason.

"For me personally, I would rather stick with a good brow gel, versus risking irritating my skin or losing my precious brow hairs," says Schook. Same. May I suggest the very clean and very effective Saie Beauty Brow Butter?

NEXT UP
Beauty
Keke Palmer Gets Real About Her Adult Acne On Instagram
Beauty
Imaan Hammam Would Like To Have Her Own Hair Care Line One Day
Beauty
Fall 2022’s Biggest Hair Trends Are Bringing The Drama
Beauty
Embrace "Marinated Makeup": The Perfect Trend For Your Feral Girl Summer