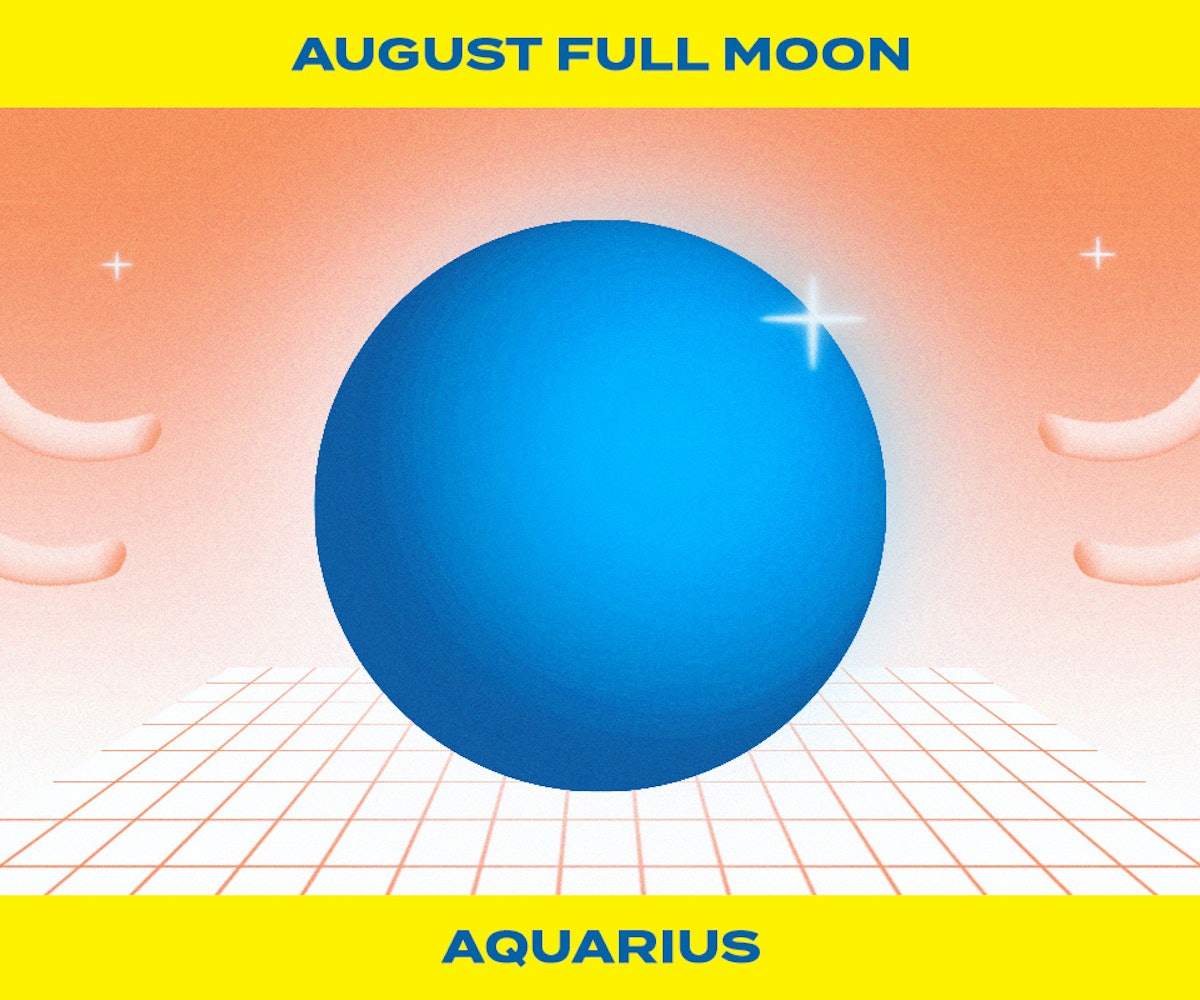 It can be hard to write about a moon that refuses to be categorized; a moon under the star of Aquarius, a sign ruled by Uranus, and so a sign that rejects influence. Out of my window, the moon has a golden tinge, and it breaks through black clouds. I stare at her too long and know that, like all powerful Aquarians, she is the one who means to influence me. How does that one Aquarius do it all: work without ethical compromise, love without self-betrayal, feed a creative drive that refuses conformity? The answers come to you, slow and steady, but they won't all come to you now. The full moon is no time to become someone else, no matter how strong or enticing their position. A full moon is for reflection, not initiation. She refracts the sun's light toward us like a mirror—holding sacred duality in all things—showing us that there is more in our world than what lies within our vision.

While the Sun goes on shining in ego-driven Leo, the moon upholds Leo's opposite sign, Aquarius, which seeks to dismantle ego, and honor a collective consciousness. On the material plane, that can manifest in manifold ways. Imagine, on a road trip, one woman is driving away from the idea of her life, the people who reinforce her perceived sense of self, and the work she's shrouded her creativity in. She is driving toward a new town where a job waits for her. Hours into the drive, car strewn with jerky wrappers, smelling vaguely of a banana peel she'd gotten rid of two rest stops ago, she's sure of something she wasn't letting herself be sure of before. There is no city, no town, job, person or group, that exists to sustain and support all your possibilities. There is only where you are and everything that got you there; the present self and all her hard-learned lessons.

This month's full moon makes these hard-learned lessons impossible to miss, rising in the sky hours after the last dregs of this Mercury Retrograde period, which is to say the shadow. The shadow, if you don't know, is the loopy path Mercury travels through as it appears to return to direct motion. The shadow, which occurs two weeks before and after marked retrograde dates, can be just as impactful as a retrograde itself. In the post-shadow period, the collective unconscious is yoked together in self-reflection. On the conscious plain, what was avoided and evaded during Mercury retrograde raised its persistent head above the water. On Twitter, hours before Mercury dragged itself out of its post-retrograde shadow, and hours before the full moon, Monica Lewinsky asked, "Are we sure Mercury is not still in retrograde?"

(A moment of gratitude, please, for the internet that allows us these almost imperceptible moments of grace when a girl this country—that hates women—worked hard to destroy proves herself indestructible and prescient as Cassandra.) We weren't sure. But now we are.

To separate yourself out from your context is to reacquaint with the singular present self. Who is the person you carry between cities, between relationships, between reactions to everyone outside of you? Is there a part of you that wakes up wondering whether knowing who you're meant to be in this world means leaving everything you know behind? Is there a jar in your mind where you stash your country-hopping daydreams? To be a citizen in America is to be dangerous and in danger. Even the most marginalized Americans are not without implication. If we pay taxes to the war machine, if we store our money in their banks and buy their products, if we are one woman driving between states eating jerky in a car running on gas. To be a citizen in America is to be raised in the mythos of a map that places our country firmly in the center.

Seeking better shores is reasonable, but what is it that Cavafy wrote? "You won't find another city, you won't find another shore." His poem is dire, if you know it, but I want to give you the rose of it. You won't find another city because what one ultimately seeks, the great escape, is without truth. All cities connect, the map of lights runs a circuit over and across seas, there are riots everywhere—this is not a world where people are free. No rose without thorns, beloved. No thorns without flowers either. You don't have to leave it all behind, although you can. You don't have to quit your job, break up, move out, or change your name—but you are free to do all those things. You just have to choose yourself, not out of spite or resentment or fear, but out of love for the city of yourself every person, idea, and bit of love you hope to foster there.