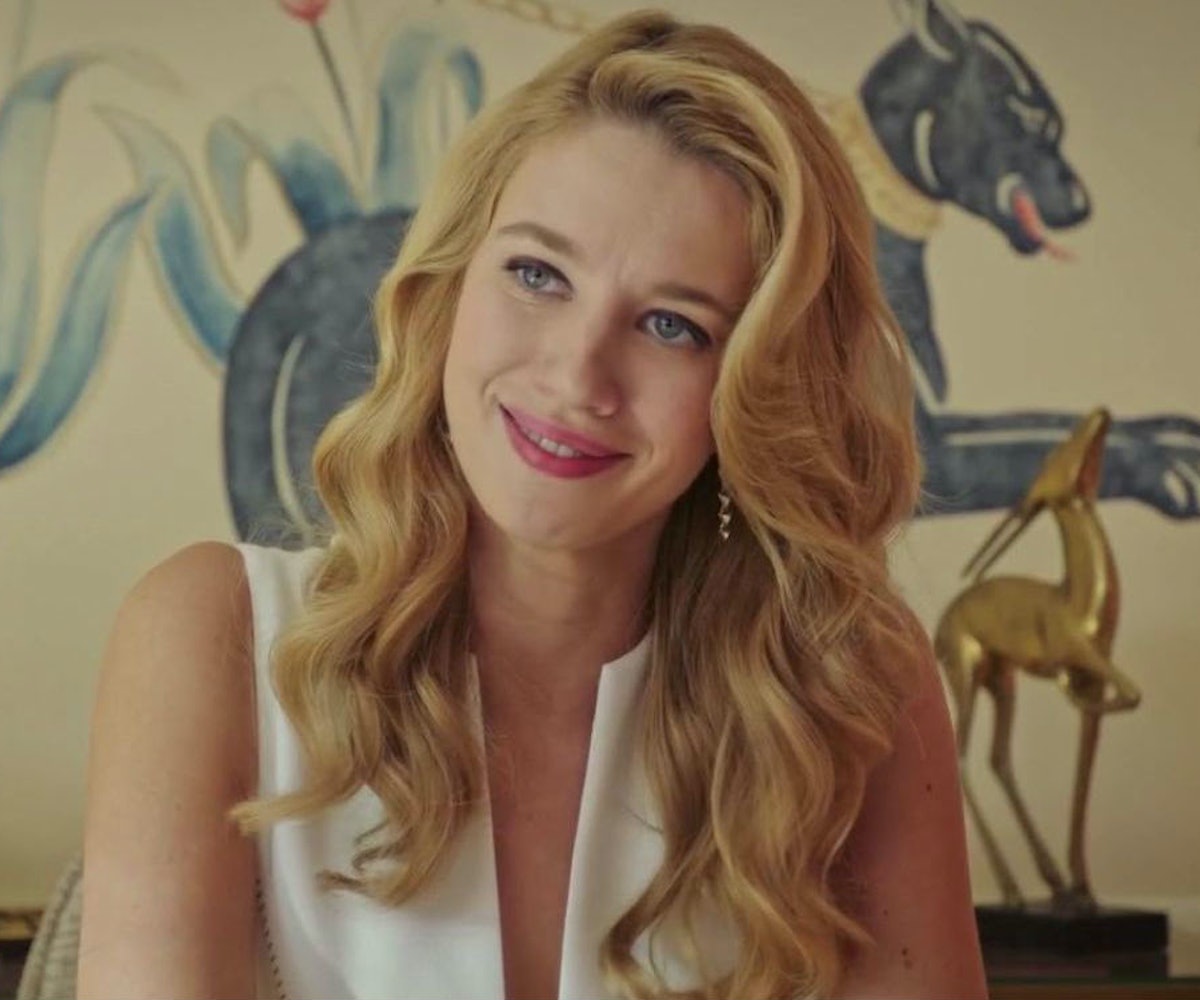 There's a scene early in Season 2 of Jane the Virgin, in which Petra is seen doing something very Petra-like: stealing a sample of Rafael's (her ex, Jane's baby daddy) sperm. But right before this scene, there's a flashback to a much less manipulative Petra, when she was happy with Rafael; when they were married, in love, and expecting their first child together. The brief time-lapse allows us to sympathize with the otherwise-wicked character, and it is even more impactful when, later in the episode, we learn Petra suffered a miscarriage. But then we're jolted back to the present, and reminded of her plans to inseminate herself in order to steal Rafael back from Jane (straight out of a telenovela, right?!). That's the thing about Petra, you hate her and you love her, and you hate loving her and you love hating her. Because, back to that scene: When it seems like Petra might be caught, the narrator pleads, "Hurry up, Petra!" And then asks: "Wait, why am I rooting for her?" That, more or less, sums up most audience members relationship with the complex character.

Over the course of the past four seasons, Petra's engaged in a lot of criminal activity, discovered she has an evil twin sister, was paralyzed by that same evil twin sister, gave birth to her own set of twin girls, suffered from postpartum depression, and engaged in more schemes than President Trump. (Or, maybe about the same number? It was a lot!)

She's cunning and cut-throat, but also misunderstood and sensitive; she's got the kind of layers that, over the years, have peeled away to reveal her as the kind of villain you can't help but root for (the best kind, IMHO). A huge part of what makes Petra such a multifaceted force is due to the behind-the-scenes work of people like showrunner Jenni Urman, but probably the biggest factor is the incredibly talented Yael Grobglas, the breakout star who plays Petra.

But Grobglas almost didn't take this role. The Israeli actress tells us she considered turning it down because she had no interest in being the bad guy. "I loved the script, I thought it was absolutely brilliant, but in the pilot [Petra] has very little [to do], and she sort of came off as this trophy wife character," Grobglas says. After chatting with Urman, who let her know that Petra was going to be much more than the life partner to some rich business owner, Grobglas came around. "Jenny explained to me that she's going to be interesting and you're going to love her one moment and hate her the next... She basically explained everything that was going to be Petra, not her story obviously, but her essence. And then I just fell in love."

Grobglas brings her all to the role of Petra. She acts with her entire being—from her facial expressions down to the changes in her voice. The true test of her skills came in the second season when audiences were introduced to Anezka, Petra's skittish, insecure twin sister, whose character traits, Grobglas says, were modeled after those of her pet cat. "I heard that she was, like, a ferocious eater and she growled and had all of these characteristics," Grobglas explains, "like being scared of personal touch, and she yelps and jumps away and all these things… so Anezka, and all of her feral reactions, was really based on my cat."

At one point, in true Parent Trap and Orphan Black fashion, Anezka pretends to be Petra who then pretends to be Anezka, and Grobglas does such an incredible job that, as Emily Nussbaum of The New Yorker puts it, "I kept forgetting that the twins were played by one person, let alone one person acting like one character pretending to be the other character pretending to be the first character."

And while Season 2 clued everyone into the talents of Grobglas, it's this past season that's made clear just how far those talents reach. After years of heartbreak and trauma and death, Petra (who should really be in therapy, now that we think about it) finally has a satisfying romance—and a non-pandering queer one at that. Fans of the show have been shipping Jane and Petra for a while, and though that didn't happen, the writers give us a close-enough version, with Petra falling in love with another Jane, played by Rosario Dawson, whom Petra calls JR. "[This story arc] is kind of what I was hoping for the entire time," Grobglas says. "For her to fall in love, not because she needed someone to complete her, but because she was complete already, and then could have another person added on, to share a life with. And, she's still showing with JR all of these soft sides that we hadn't seen before."

Of course, Jane the Virgin being a telenovela and all, Petra's happiness will probably be short-lived. But it's been nice to see Petra happy, if only for a little while. And, as Grobglas tells us, it's been nice to play a happy version of the character as well. "When my friends watch those happier moments, they're like, 'Oh, that's more you…' the smiley, giddy, happy version of Petra," she says. "It's just been a lot of fun to be able to play both the very dramatic, serious, sometimes aggressive side of her and also the soft, natural sort of feel-the-feels moments." She goes on to reflect: "I can't think of another situation where, five years in, you're still being surprised by the character you're playing and still get to show new sides of her all the time. And it's not like nothing happened, and then suddenly she changes five years later. No, it's constant evolution and constant change."

With the series coming to an end, it's unclear how Petra's story will pan out (Grobglas is tight-lipped, but promises that "there's going to be a lot of ups and downs and everything's going to be shocking and incredible, and you'll be surprised"). The main focus is on Jane and (spoiler!) whether she'll wind up with Michael or Rafael (Grobglas is torn on which team she's a part of; "I love both of them," she says), but we're rooting for the other option, which Grobglas suggested back in 2017: That Jane and Petra run away together. "I still think that could be a wonderful solution," she says. "Just forget about everything and raise their babies together. I think they would make a wonderful little family." It's the ending Petra deserves—and us, too.

The final season of Jane the Virgin airs tomorrow night on The CW.