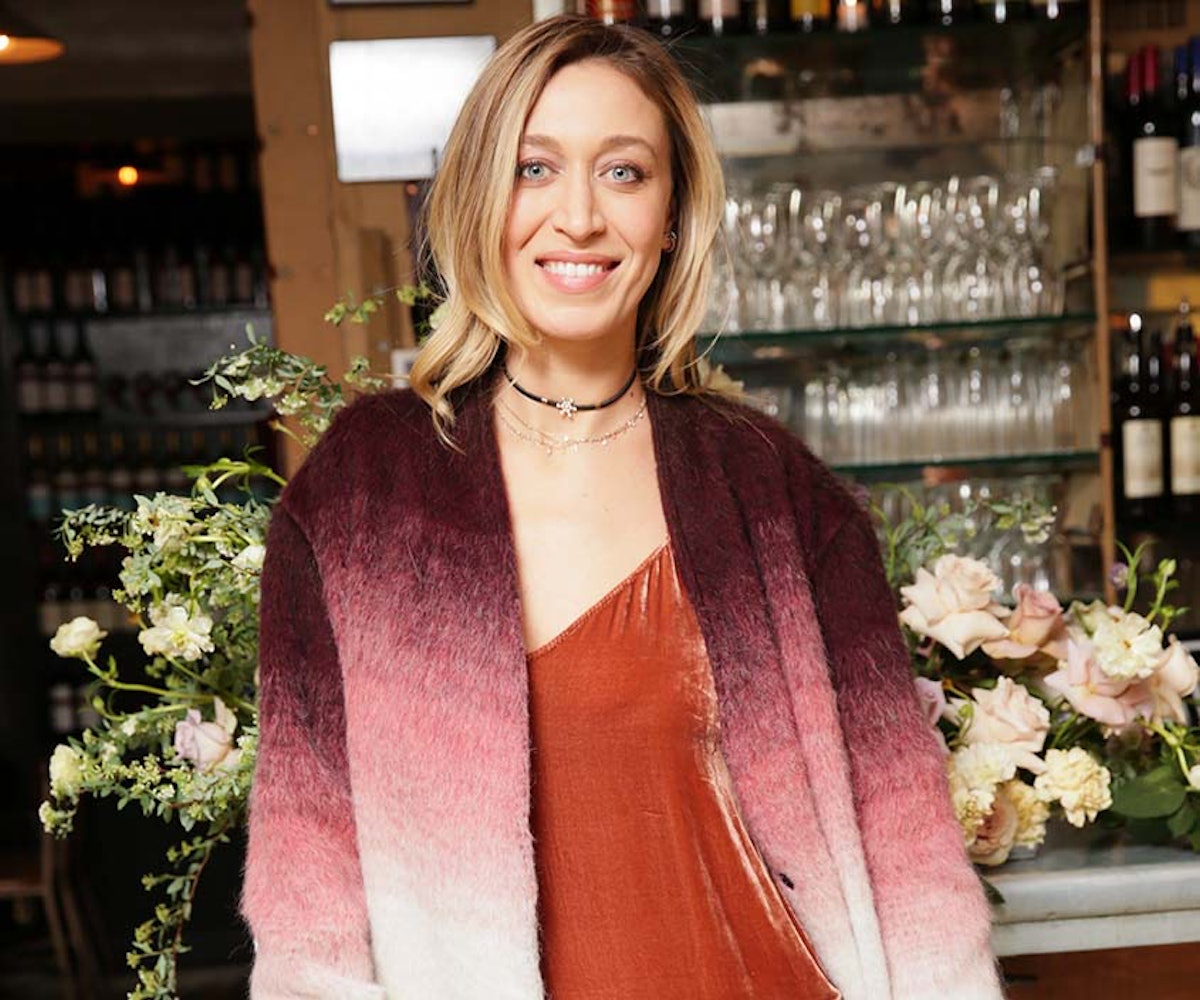 Alana Hadid, the older and equally as cool half-sister to Gigi and Bella, is launching an exclusive collection with Lou & Grey later this month. Known for their easy, relaxed pieces, the brand seems like a match made in heaven for Alana, who describes her style as “really laid back and comfortable.”

However, this is not her first foray into fashion. Aside from working as a personal shopper and stylist, she also designs—she runs her emoji-inspired T-shirt line called Current Moji, where her humor is quite tongue-in-cheek. Her tees feature emojis of her own creation, such as “trophy wife” and “weed doctor.” Most recently, she followed in the footsteps of her younger sisters, becoming the new face of the brand's campaign back in November.

The collection includes a sweatshirt donning her nickname “Lanzybear” for $64, limited edition printed leather clutches for $98, and a bandana available in multiple prints and colors for $32, which she lovingly refers to as “her baby.”

To celebrate her new collab, she hosted a stylish cocktail party at Navy in Soho—with Gigi, Bella, and her father in tow, of course. I sat down with Alana to chat more about her new line.

What’s the best way to describe your personal style?

I would say it’s really laid back and comfortable, but also structured and fun. A lot of people like to say their style is eclectic, but I think mine is eccentric. I just like to do whatever I feel that day—if it’s preppy, I’ll wear something with a collar. I definitely feel like I have a certain aesthetic, but it’s really based on my mood and where I am. I’m a little bit more “New York” in New York, and a little more “L.A.” in L.A.

How was this interpreted in your new line with Lou & Grey?

I wanted to involve and incorporate things that felt the same way—that felt comfortable for everyone. I wanted to do something that can be interpreted by all—and each piece can be worn in different ways, which I think that has a lot to do with my style.

How did the collaboration with Lou & Grey come about?

I really connected with them right away—they’re such a cool brand, and the people that work for them are gems. It was super organic. I went into their store and was talking about how much I loved the brand and all the people in there on the sales floor were actually the head designers and head of marketing. I had no idea, but I think they could see how genuinely I loved the brand, so we worked really well together.

Who is the Alana Hadid x Lou & Grey girl?

I really think it’s anyone. I think there’s a way that you can incorporate what I’m doing into any lifestyle. Like this clutch we’re doing, I feel like you could wear it to a party and throw all your things in it, and throw it into a big bag to hold all of your makeup for the day. You could do a lot with it. Same thing with the bandanas! I also have a sweatshirt, and you can dress up a sweatshirt a million ways now—you can wear it to a party, you can wear it to sleep, you can do whatever you want with it. I think there’s a way that these pieces can be incorporated into any lifestyle—I really tried for that.

What’s your favorite piece in the collection?

That’s a hard question, I have a connection to all of them, obviously. I really love the versatility of the bandanas, though. I think that they’re so cool—you can tie one around a bag, you can put one on your head, you can wear one as a choker, or even as a bracelet. I just feel like the bandana is my baby—I love bandanas—and you can wear them so many ways.

The line will launch in Lou & Grey stores nationwide and online on February 22. Click through to the gallery for a sneak peek.