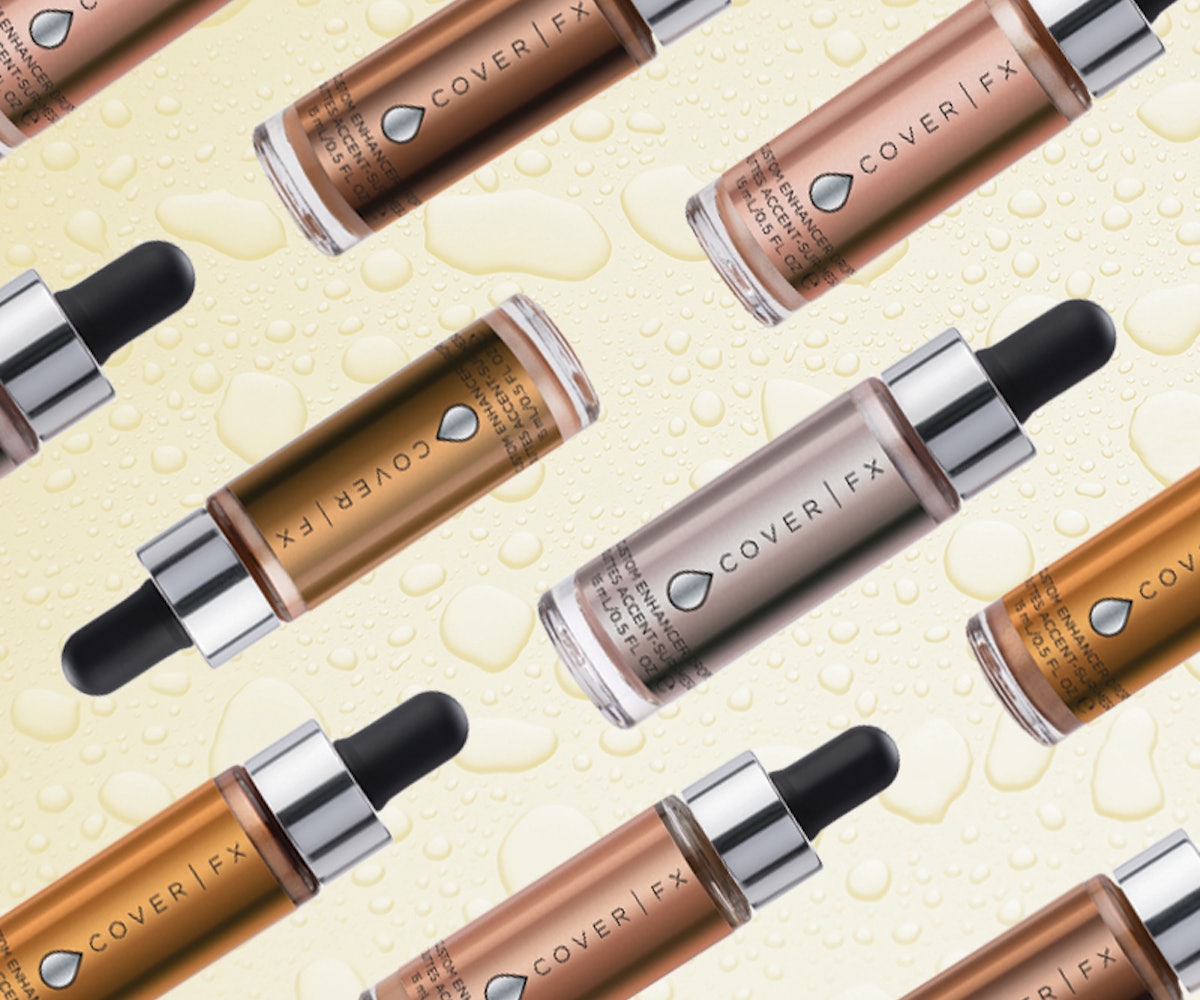 Okay, so I may be a little late to the party. CoverFX released their Sephora-exclusive Custom Enhancer Drops in early June to rave reviews, and although I had been meaning to pick some up for a long time, they were always out of stock when I got around to it. I didn’t even know if I was going to use them, honestly, as they seemed complicated, messy, and finicky. For someone like me, whose daily beauty routine is based on how much I can get done in a short amount of a time, they seemed like an unnecessary hassle. I already own a bunch of highlighters in similar shades too, so did I really need another one?

But, as I was browsing Sephora’s app on my phone a couple weeks ago, I noticed that Celestial—the pearly white shade that seemed best for my ultra-pale skin—was back in stock. So, being the beauty junkie that I am, I placed my order right away, because who knew when that shade would sell out again?

When I finally got around to trying the product, it was the middle of fashion week. I got out of bed to do my quick beauty routine and, on impulse, decided to try out the drops, quickly smudging them with my fingers on my cheekbones to see if they would add a little oomph to my moisturized face.

And that was it; that was my face routine for the rest of fashion week. Walking around SoHo, seeing dewy-faced models at every corner was not only an inspiration but an invitation. I didn’t have to do a full, or even partial, contour. I didn’t have to use foundation. I could just dab a few (incredibly small, as this stuff is seriously pigmented) drops of the Custom Enhancer formula on my cheekbones, nose, and forehead, and I had a natural-looking, healthy glow. Not just for a few hours, but all day. With skin that absorbs everything, finding a liquid highlighter that stays shining from the morning into the night without fading, but also without smudging or transferring, is a near miracle. This was the solution I had been waiting for.

Dewy skin was the trend on nearly every runway at NYFW, and this was the only way I had ever been able to genuinely achieve it. Presumably, there are a ton of other girls out there, like me, who have tried different BB and CC creams, tinted moisturizers, skin-care regimens, and "luminous" foundations, all to find their skin falls back to matte after a few hours.

Before telling the world of my experience, though, I wanted to try out the entire line. The full CoverFX collection is comprised of four illuminators and two bronzers in a shade range that suits all skin tones, so I got my hands on all of them. Check out my impressions of each, below.

Celestial, my personal, everyday shade, is described as a "glistening pearl." For fans of Benefit's High Beam, this one is for you. It's worth the uptick in price, as you need so much less of it to get the same level of shine. Not to mention, the amount you save by not having to reapply repeatedly throughout the day, and the hassle it saves by not smearing across your face, is pretty worth it. The shade also provides you with the brightest shine and most noticeable highlight of the bunch, particularly because it's super buildable. Depending on how much you're willing to use, it can give you just a small, natural gleam or a full-on strobing effect. However, the formula for the Custom Enhancer Drops, as a whole, is thin and pigmented enough that I would suggest applying with your fingers, at risk of either losing some of the product or blending it into places where it does not belong.

Unfortunately, I would advise against mixing this one with your foundation, or suggest you dilute it first. When I mixed a full drop with my liquid foundation for the day, it made me look like an ice princess. Although, hey, if sparkly ice princess is your goal, go for it.

Moonlight, which "imparts a soft, silver glow," is the shade I could combine most easily with my foundation to give me a natural, all-day dewy skin look, while still maintaining some coverage. I would imagine this holds true for most of the porcelain-to-light skinned ladies out there. It (like all the other products in this line) thins out your foundation a little bit, which can either be a good or bad thing, depending on the coverage you need. Be prepared to do a little bit of experimentation with ratios if you have redness like I do or other skin problems you would rather cover up.

However, alone, it still works as the highlighter it's intended to be. There's no loss of shine, and it doesn't blend to a point where it's unnoticeable.

Sunlight which "imparts a soft, golden glow," I am excited to say, is an incredibly close match to Becca x Jaclyn Hill's lauded Champagne Pop highlighter. The only difference: after swatching both on my forearm, leaving it for ten minutes, and then running it under water, Champagne Pop dissolved almost immediately, while the CoverFX product stayed put. The formula is much thinner than Becca's and holds much more pigment, making it way less messy to apply and easier to not waste product.

This shade would mix well with medium-toned foundations, creating the same effect I experienced with Moonlight.

Candlelight, the darkest of the highlighters and the one described as an "illuminator shimmering golden bronze," was the product that surprised me the most. I didn't expect it to work on my skin tone at all. But when trying it out, I experienced something I haven't with a highlighter before; I looked like a normal, slightly sun-kissed person. (Aka I looked like I go outside during the daytime much more than I actually do). I even had my similarly-pale roommate try a couple of drops before going out one night, to make sure it wasn't just me, and her response was similar: "I feel like I've been given something I never thought I'd get again... I just look genuinely healthy."

As with the previous shade of the Enhancer Drops, I would imagine this shade would create the same effect I had with Moonlight for those with darker complexions.

Sunkissed, the lighter of the two bronzers and meant to evoke a "light sunkissed look," is probably the easiest liquid bronzer I've used due to its (again, incredibly thin and pigmented,) formula and packaging. The dropper makes it particularly easy to control exactly how much you want to use, which is a definite plus when it comes to a bronzer. How much you use will definitely depend on your skin tone and the effect you want. Put a few drops on the places you want a little more shade—with your fingers or a brush—and blend, blend, blend.

The darker bronzer, a shimmery milk chocolate shade called Sunset, creates a "deeper sunkissed look." It's the perfect shade for a wide range of darker skin tones, with the same consistency and easy-to-blend formula as the other shades.