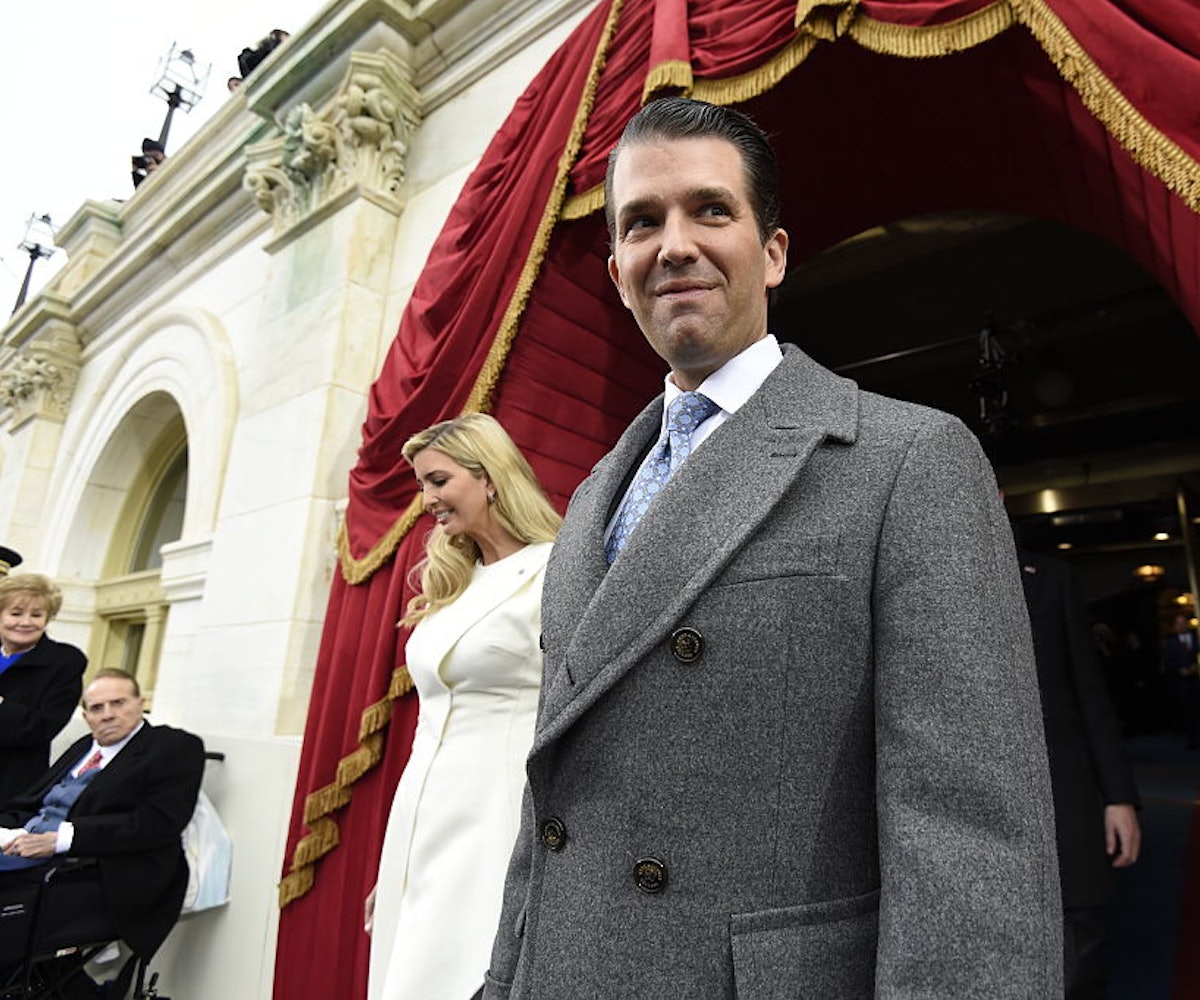 So a pretty cool thing that I did a few months ago is that I blocked Donald Trump Jr. on Twitter. This has benefitted me in countless ways, but the primary one is probably that I don't get rage spasms whenever some other person I innocently follow on Twitter decides to retweet this MAGA-spouting cretin. I'm sure it's added years to my life.

Those years have been summarily taken right back off, however, following a bombshell New York Times article, and the subsequent tweets by one Don Jr., regarding a meeting between Don Jr., former Trump campaign manager Paul Manafort, Trump senior advisor Jared Kushner, and a Russian lawyer with close ties to the Kremlin. As the Times reports, "The June 3, 2016, email sent to Donald Trump Jr. could hardly have been more explicit: One of his father’s former Russian business partners had been contacted by a senior Russian government official and was offering to provide the Trump campaign with dirt on Hillary Clinton." The email made clear that Don Jr. was excited about the possibility of getting this information, and knew that it was being given to him because the Russian government wanted to help Trump win the U.S. presidency. This is the very definition of collusion. It's treason, plain and simple. So, of course, Don Jr. is going to deny it, right?

Wrong! While at first, the Trump scion claimed he only wanted to talk to the Russian operative about, um, adoption, Don Jr. quickly backtracked and said, of course, he wanted to meet up and get dirt on Clinton, who wouldn't? And then he went even further this morning, tweeting the email chain in full, including an email he sent specifically saying that he would "love" information on Clinton. This seems like the height of idiocy, right? How stupid would Don Jr. have to be to incriminate himself like this?

Well, as he might say, referencing another know-nothing American uber-male, "stupid like a fox." Here's probably the most insane aspect of the whole Trump reality in which we live now—everything that seems blatantly stupid and horrifying, and that like should lead to arrests and hearings and, like, impeachment, has led to... nothing. Absolutely nothing. It's like we now live in the worst version of opposite world ever, where stupid is smart and a sentient burlap bag of angry wasps, is president.

So even though it seems that, by tweeting evidence that only proves he is a glibly treasonous monster, Don Jr. is doing something stupid that should land him in jail, the many, many times that he and his family have avoided facing any sort of consequences for the wrongs they've committed, means that this seemingly stupid move might actually be smart. Not smart in, like, a "Don Jr.'s actually a low-key genius" kind of a way, but smart in a "Don Jr'.s fully aware that he can basically get away with anything" kind of a way, and he's enjoying it. You know, the kind of "smart" that makes you want to weep in frustration? That kind of smart. Ugh.

Of course, I hope that these emails serve as some sort of a turning point. It would, after all, be great if emails were what brought the Trumps down. I hope that this is the straw that breaks the Trump oligarchy, and that Don Jr. and Kushner and Manafort all get arrested for treason. I hope these things, but I'm not holding my breath yet since it seems like the only way a full half of this country will believe that the Trump team colluded with Russia is by finally seeing the pee tape. And while I am quite sure that seeing that will take even more years off my life, I also just think the time has come for someone out there to release the pee tape, so that our long national nightmare can finally be over. It's about time after all. There are bigger things to worry about.