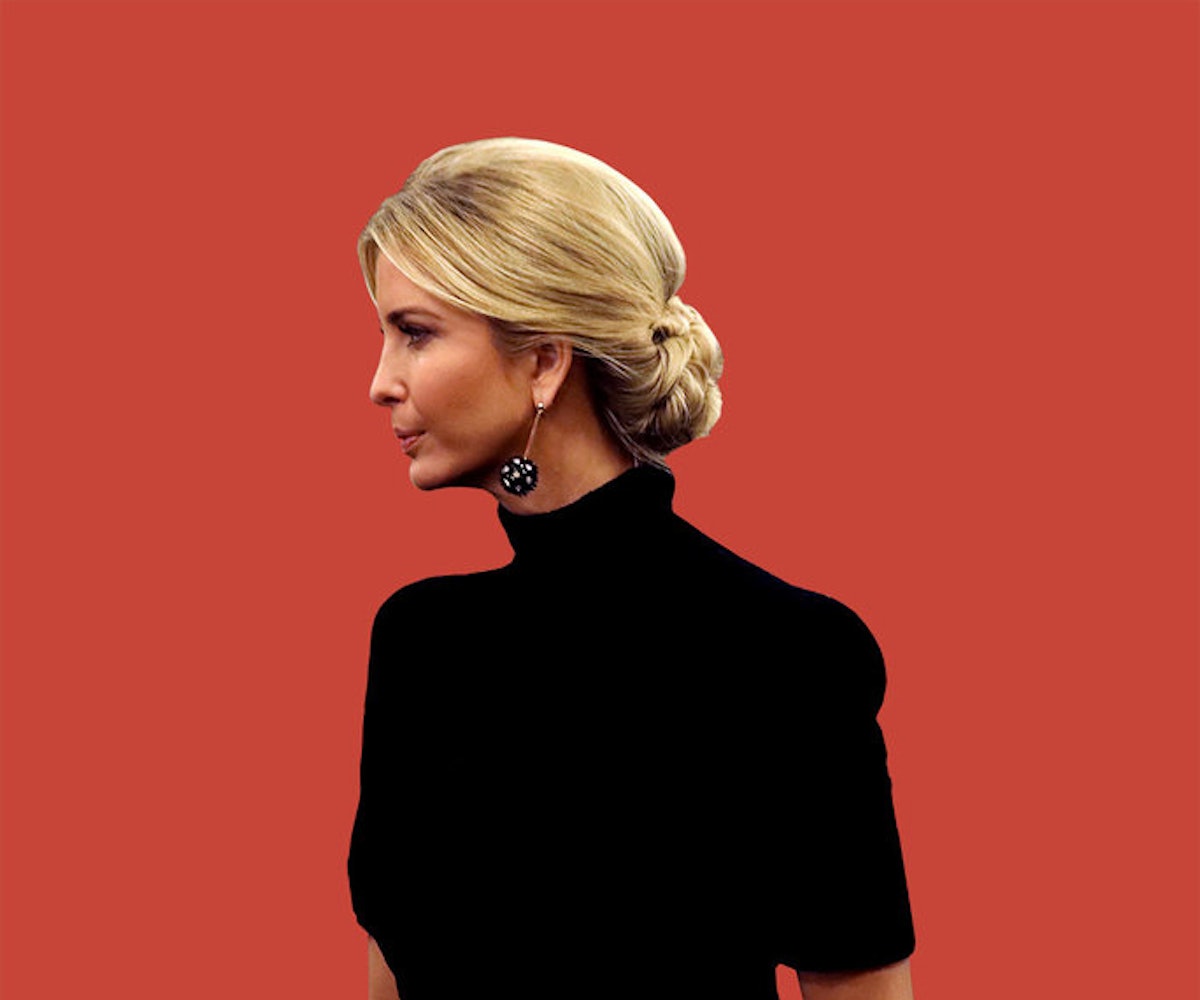 In an interview that airs today, Ivanka Trump speaks with Dr. Oz and reveals that she experienced "some level" of postpartum depression with each of her three pregnancies. Trump explains, "It was very—it was a very challenging, emotional time for me because I felt like I was not living up to my potential as a parent or as an entrepreneur and an executive. And I had had such easy pregnancies, that in some way the juxtaposition hit me even harder."

Trump was questioned about why she chose to share her mental health struggles with such a wide audience, after having kept it a private matter for so many years (Trump's eldest child, Arabella, is six; her sons Joseph and Theodore are three and one, respectively). She responded that she found this issue "incredibly important," and knows that "this is something that affects parents all over the country."

In this, Trump is absolutely right. Estimates say that one in seven women deal with postpartum depression, meaning that this is a disease affecting hundreds of thousands of American women every year. And like most—if not all—forms of mental illness, postpartum depression has long been stigmatized as not being "real," because it's "in your head." It also carries the burden of a double stigma since postpartum depression afflicts women, whose mental health concerns are all too often dismissed already. This has led to a climate in which postpartum depression has rarely been discussed openly, one in which women who suffer from it are told to simply cheer up and feel grateful because they have a baby to enjoy. And, in turn, this has led to many women staying quiet about their illness, not treating it, and often dealing with even more severe aspects of the disease, including postpartum psychosis, suicide, and infanticide.

How to combat this epidemic? It's undoubtedly a two-pronged approach. One of the important steps to take is, in fact, exactly the one Trump has just taken: talking openly and honestly about mental illness, thus removing its stigma. For many women, seeing someone as externally put-together as Trump admitting that there was a time in which she was not in control of herself is helpful. It allows them to feel like they can unburden themselves, too, and that addressing their illness will not necessarily lead to others perceiving them as being weak or flawed.

But there's another, even more important step: Providing women with access to affordable health care, particularly when it comes to pre- and postnatal costs and mental health treatment. And here's where there's a problem with Trump's confession.

Right now, Republican senators Bill Cassidy and Lindsey Graham have co-sponsored a health care bill which has not only been strongly condemned by medical professionals, but also by, well, just about every other analyst of the bill, almost all of whom see it as yet another attempt to repeal Obamacare without a viable replacement, and almost all of whom are noting the disastrous effect it will have upon millions of Americans because of its refusal to cover people with pre-existing conditions and because of how it lets employers determine whether or not things like prenatal care and postnatal care will be covered in their offered plans.

This has led the Graham-Cassidy Obamacare repeal plan to be called the "worst yet for women's health," specifically because of how drastically it would impact maternal health coverage. It would undoubtedly lead to more difficulties for low-income mothers-to-be, who would face increased financial strain and might not seek help for postpartum depression, should they face it. The seriousness of this problem cannot be overstated; the fight against yet another draconian Republican health care bill is a fight for the well-being of all Americans—including women and children, who are often most vulnerable to massive changes in health care policy.

And yet, Trump has said nothing about Graham-Cassidy. Though she now feels comfortable talking about her own bouts with postpartum depression, she apparently does not feel comfortable enough to engage with the fact that hundreds of thousands of American women risk suffering the same disease, only without the benefit of Trump's millions of dollars to help them get well.

Trump's blatant hypocrisy has led to many people calling her out on social media platforms, expressing a real lack of sympathy for her experience with mental illness. In turn, this has led to conservatives decrying the cruelty of liberals, who can't even show support for a woman opening up about a sensitive topic; "she doesn't deserve this," they say. But, you know, as much as anyone deserves anything, yes, Trump deserves this, because Trump can't have it both ways, even though she tries her hardest.

Throughout her father's presidency, Trump has tried to walk the fine line of enjoying and exploiting her access to the West Wing in her role as both the daughter and assistant of the president. She has attended important meetings, sat in for her father at world summits, and done a host of other things for which she seems to revel in the spotlight. But she has also been noticeably absent when her father has enacted or attempted to enact wildly unpopular legislation, the kind that has brought millions of Americans out into the streets to protest this president and all he stands for. She has given interviews in which she denies knowing what the word "complicit" means and claimed she "tries to stay out of politics," a surprising claim from someone whose official title is "assistant to the president."

This most recent interview, though, too perfectly demonstrated the despicable nature of Trump and the presidency which she publicly represents. Trump wants to keep herself separate from the dirty work being done by this administration, but she also wants to benefit from being centered in the public eye. Her choice, though, to use this moment, when countless Americans' ability to access affordable health care is being threatened, and talk about her own health struggles, shows how completely callous she is about the people she is ostensibly serving. It demonstrates how little this administration cares about the minority of people who voted it in power. It reveals, yet again, that the only America these people care about making great, is the one in which they live, where consequences don't exist, words are meaningless, and actions are executed to enact maximum cruelty upon those who don't support their agenda.

If Trump really wants the sympathy of the American people, perhaps instead of simply talking about her own mental health battles, she can work to guarantee that every person in America has the ability to get treatment when they face similar issues. Then, maybe, Trump will deserve something other than our contempt. But only then.