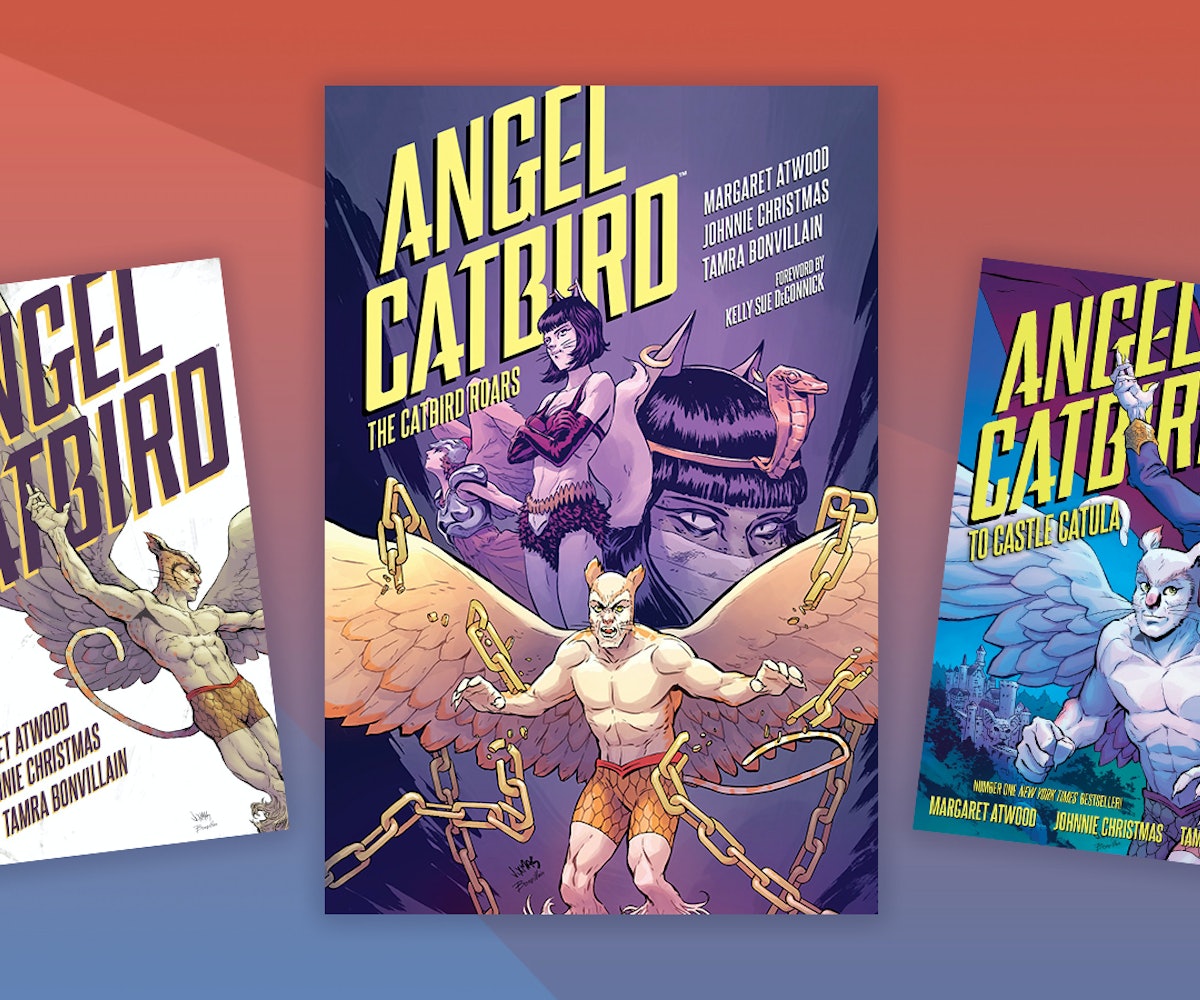 Angel Catbird is a three-part comic books series combining mystery, sci-fi, action, environmentalism, and good old-fashioned fun. With visual and narrative nods to the Golden and Silver Eras of comic books, Angel Catbird tells the story of Strig Feleedus, a genetic engineer and recent hire to Muroid Inc., brought on to complete the work of his mysteriously deceased predecessor. Through an unexpected series of events, Strig finds himself exposed to his predecessor's mysterious "super splicer serum," and his DNA merges with that of a cat and owl. This is where the real adventures begin.

This delightful narrative gift springs from the mind of Margaret Atwood (yes, THE Margaret Atwood, of The Handmaid's Tale and Alias Grace, and so much more) and is further backed by a talented creative team, with illustrations by Johnnie Christmas and color by Tamra Bonvillain. Volume One (which includes a revealing introduction by Atwood about her relationship to comic books, self-expression, and cats) and Two are currently available, and Volume Three is set for release on July 4 (look for the forthcoming review, featured in the second installation of my comic book roundup Graphic Content), so you still have plenty of time to catch up!

I had the opportunity to speak with Atwood about her experience bringing this world to life, what we really need to know about cats, and what exciting new projects, comic and otherwise, are on the horizon.

In these trying times, I found Angel Catbird’s theme and story arc deeply refreshing. Did you have as much fun writing this as I did reading it?

Yes, I had a lot of fun writing it. I also had a lot of fun working with the collaborators, namely my co-creator Johnnie Christmas—yes, that’s his real name—and Tamra Bonvillain, the colorist. They’ve been really good, and so has Daniel Chabon, the editor. And the person who pulled it all together in the first place, Hope Nicholson. I’ve also been very cheered by the invitational pin ups and the back of each volume, where the art of different artists who have done their own interpretations is featured. My favorites are this one by Gisèle Lagacé in which Strig has given Cate a gift, and it's done in this sort of Betty and Veronica style, and there’s a beautiful, very sort of formal portrait of Count Catula as the sun is setting, by an artist named Razzah. I think that’s a lot of fun. What’s not to like?

This story is a strong nod to the Golden Age of comic books, when the ideas of good and evil within a story’s universe were clear, and moral ambiguity isn’t often present. You've said in the past how you began your relationship with comics during that Golden Age. What was it about that era that you found appealing?

Well, I was a kid, right, and that was the late '40s, right after the war. Colored comics came roaring back in Canada; there had been a number of wartime comics, but we couldn’t get colored comics in Canada during the war. They really surged forth in the latter part of the '40s, and I would’ve been six in 1946. Comics were the hot new thing, and they were also what there was. There wasn’t television, there wasn’t the internet; there were movies, but, of course, most of them were adult movies, and the few that kids could go to cost money. More money than comics. Comics were what kids did on Saturday mornings. We read and traded comics, and we also drew comics ourselves at that time. We didn’t actually have anything to compare them with, because they were it.

And so was it nostalgia that directed you back to that era when it became time to do your own series?

It’s not totally back [in that era]. It’s aware of the tropes, but it's not an intent to recreate that. It is its own thing. You find that a lot with any kind of superhero comics. You probably know the one called Mama Tits Saves the World. She has superpowers, too. Unfortunately, she can’t fly. Instead, she has a magic word, which is completely an homage to Captain Marvel. Comics have become quite a self-referential field, and people are quite aware of it. But they weren’t at the beginning.

The first book of the trilogy was released last year with the second and the third coming in 2017. When did you really start this story?

I had the idea for quite a while, long before I acquired an artist who could draw these kinds of comics. I draw comics, but mine are quite lumpy, so I would not have been able to draw this sort of thing. I was looking for somebody who could, but I didn’t really know where to look.

Then I ran into Hope Nicholson, who is a kind of curator of comics. She has this new book out about female superheroes and comics. It’s very thorough, she really knows her stuff. I was helping her with a Kickstarter to republish an old Canadian wartime series. Once, while together, I said, "Do you think it would be really crazy if I did the following?" And I explained to her what I had in mind for this series. She said, she didn’t think it would be crazy, and helped me start by finding an artist; got a bunch of sample art, figured out who was free to do it... she put that together. She found our publisher, Dark Horse Comics, and the editor, and that’s how we put it all together.

How was writing this story in comparison to a novel?

It was a lot like writing a television or film script, which I have done. I did a bit of that in the '70s. It’s similar in that you’ve got scenes, except you call them panels. You’re aware of the layout of the page, whereas in the film or television script you’re aware of syncopating different scenes and how long they should be. So it’s the same kind of thing when shooting the scene: What are they saying? What’s the camera angle? What are their emotions? What’s the scenery? Mention any relevant furniture. Essentially you’re telling the people who will do the visuals what it should look like.

As you were writing this story, did you feel like you had more freedom in the comic book format than in other written forms?

No, not at all. You’re most creative when writing a novel because it’s only you in charge of it. Whereas comics, television, film, plays, ballets, operas, they’re all collaborative forms, so you’re working with other people.

How involved were you able to be beyond the written part? You mentioned that you do draw. Did you draw any preliminary sketches to help design the characters?

Yeah, there’s one of them actually in Volume One. I did the nightclub outfit. I enjoyed it. They said, "This is rather daring." I said, "It’s a nightclub! It’s a cat nightclub. Of course, it would be daring." So that was fun. Sometimes you get to make notes. We went through several looks for Cate Leone and got her finally to look more cat-like than a human being.

That’s so funny because the first moment I saw her, I thought, She’s a cat!

Exactly! It’s because cats have a particular shape of face…

Yes, exactly. We worked on the eyes. I actually sent him pictures of cat eyes and other people’s eyes that seemed to be cat-like.

One thing I really noticed is that the books are full of facts about cats and the environment and their place on the bottom of every few pages.

That was my main motivation for actually doing this.

What did you hope people would take from seeing them?

Well, first of all, that they all realize the magnitude of the problem [that cats are facing in the world], and second, that they realize that their cats should be treated as well as a dog. Some of the statistics in the book are on cats that get hit by cars, cats that are killed by other animals, cats that get lost and you never know what happened to them… those statistics are high. You would not actually let your dog run around outside by itself in that way. People have been in the habit of doing that with cats with the mistaken impression that cats can take care of themselves, which is true in some cases, but actually in the city, not. Because they’re not very smart about cars. The territory for a male cat in the wild would be a square mile. So they’re always running around trying to defend their territory and getting in fights if you let them.

Are any of the characters based on your cats?

No, not really. They’re more based on the requirements of the plot. I had cats all my life, but we don’t have any at the moment because we’re too old, and it would be a tripping hazard. The latest two, one of them was very smart but neurotic, and the other one wasn’t as smart but was very friendly to other people. She wasn’t a hunter, so I don’t think she killed much of anything, but she would go outside our house and roll around on the sidewalk and entice strangers. One day there was a knock on the door, and it was a guy I didn’t know at all, and he said, "Oh, I forgot her smoked salmon today, but I’ll bring it tomorrow." [I thought,] Oh Fluffy, what have you been doing? Hanging out with strangers.

There was a lot of character development and historical reference. What was your favorite part to write about?

I’m partial to Count Catula, I have to say. He was fun to write. He has an old-style, gentlemanly way of expressing himself. Count Dracula, as you know, had three brides of Dracula, but Count Catula has way more. He’s a cat. They come in, of course, as a plot element in Volume Three. They’re very mad about their interior decoration being ruined.

Can we look forward to more comic books from you, whether in this universe or another?

We’re discussing that right now. But we are turning Angel Catbird into an audio book. It’ll be like an old-fashioned radio play with a theme song and musical aesthetics and different actors playing different roles and voices, and that will be all three of the books in one audio book. That will be produced by Audible, the audiobook company.

That’s so exciting, radio plays are so fun.

That’s the other thing I grew up with, that and comics, and the two seem to really go together. In fact, some comics have their own radio shows, like The Green Hornet.

I can’t wait for that to come out. Is there anything else you would like to share with our readers?