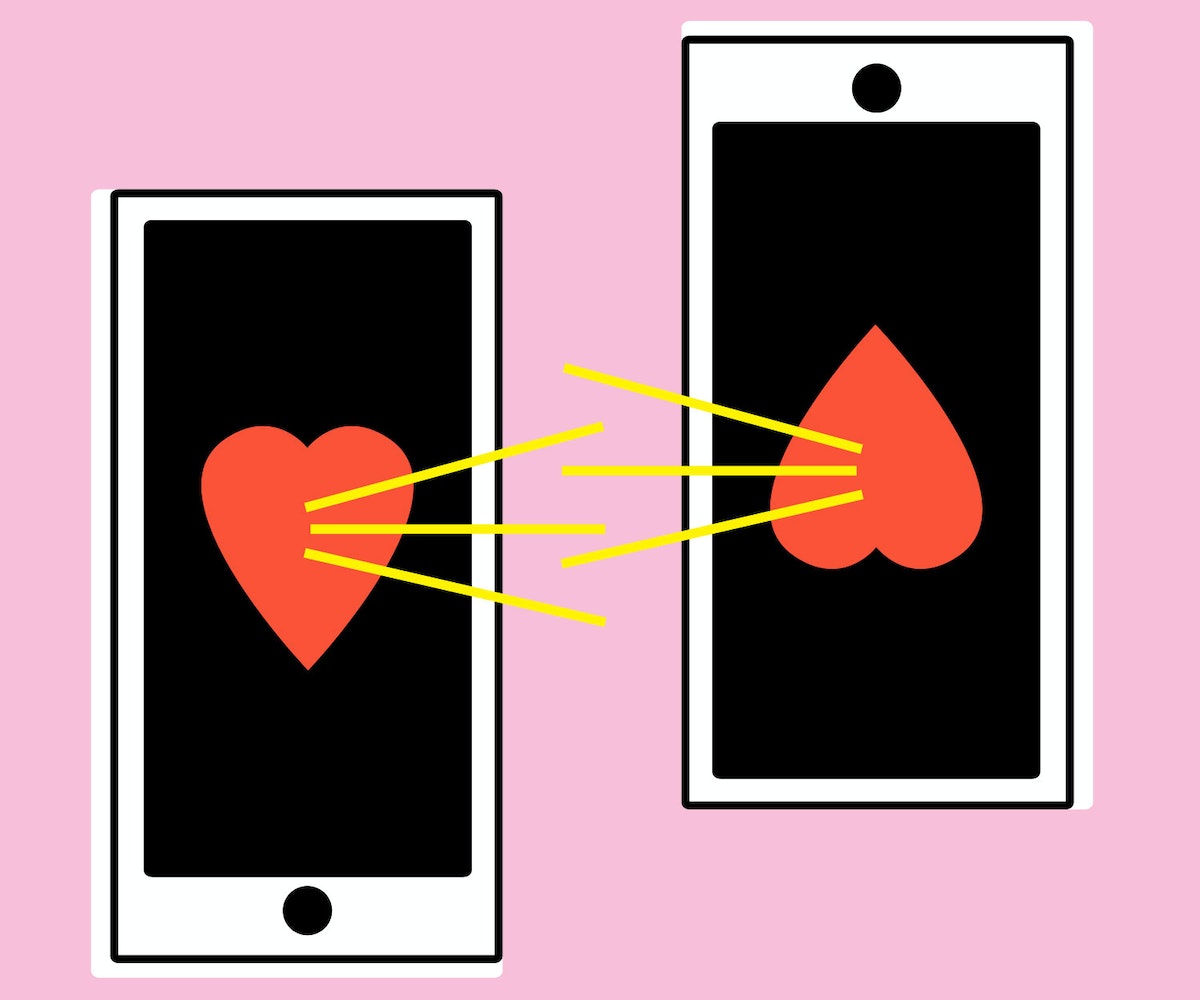 First impressions are everything. That's trite, but very true—especially when you're navigating the online dating scene. All you've got to win someone over are a few photos, a short bio, and some solid opening lines. These days, however, not only do romantic meet-cutes not happen over dropped books in quaint bookstores, but also they aren't just limited to online dating sites. Rather, they happen anywhere and everywhere on the internet, even where you don't necessarily expect them. By this, we mean that it's just as common to find someone on Tinder as it is for a few well-placed likes on Instagram to turn into flirty comments, which turn to DMs, which turn to "let's take this offline," and, well, then anything can happen.

No matter where you find a potential online or IRL love match, in order for things to go well, pay attention to the advice of Emily Bartz, from NextAdvisor.com, who says one of the worst things you can do when online dating is "open up a conversation with someone you matched with in a way that is off-putting or offensive." Instead, she advises making your opening lines personal to your new match. "Daters should take the time to read their match’s profile and initiate a conversation by asking an insightful question regarding something they mentioned on their profile," she says. "Not only does this show a potential date that you’re genuinely interested in getting to know them, but it’s also a chance to touch on something that you might have in common."

On the flip-side, rattling off an elevator pitch about yourself or being overly complimentary "can come off as bragging or being too self-absorbed." Old adage pickup lines, too, should be avoided because, as Bartz says, "The internet is full of unoriginal ideas, and your match has more than likely heard them all before." Your best bet is being polite, short, and sweet. "Online dating is tricky for everyone," she says, "so cracking a joke might be just what you need to break the ice."

For a little inspiration, 10 real-life couples who met over the internet shared their first interactions with us. Love isn't necessarily dead; it takes persistence, individuality, curiosity, and an openness to humor. That's a modern-day adage we'll swipe right to all day, any day.

"He started the Tinder conversation with, 'Tell me three things about yourself that I couldn't guess from looking at your profile.' Unfortunately for both of us, I recently had a terrible Tinder date and was beginning to think that I couldn't take anyone seriously on a 'hook-up' app, which is totally shocking. I figured I would have fun with his line and answered, 'My skin is actually flesh-colored fur, I only eat grapes, and I'm a wizard.' I didn't expect much more than a laugh, but after he told me he was also a wizard, we got to talking and planned a first date. " — Grace

Who: JT, blogger/YouTuber, and Harry, hairdresser; dating for six months

"After the brief formalities when we first matched on Tinder, he asked me what 'blackwaxx' (my Instagram handle) meant and within a few days we met and have been together ever since!" — JT

Who: Jessica, non-profit community organizer, and Brent, chemist; dating for two and a half years

Where Did They Meet: OkCupid

"I messaged him first... something really generic, like asking how his day was. He responded like a normal human (i.e. not an asshole), and we chatted for a week or so before agreeing to meet for drinks." —Jessica

Who: Jessie, video producer, and Killian, environmental designer; dating for one year

"Killian made the first move on Tinder. I had written in my bio that I was a literal, actual witch, and his ice breaker was a one-liner or a witch pun if I remember correctly. He made it clear that he was extremely goofy, but not in a run-of-the-mill white boy way. He somehow managed to set himself apart in a sea of boring. It didn't hurt that he had red hair, either. He came across as totally charming." — Jessie

Who: Juliana, lead of growth and sustainability at a non-profit and a research food scientist, and Alec, financial analyst; dating for nearly two years

Where Did They Meet: OkCupid

"Our first interaction was discussing international travel. I asked where in Europe he has studied abroad since he mentioned on his profile he had done some extensive traveling in college. " — Juliana

Who: Gabrielle, digital editorial director of NYLON, and Kaitlin; dating for 10 months

"She was the first person I matched with on Tinder. She messaged me immediately and said, 'Waiiit a minute.' It was total clickbait. I wrote back 'Uh oh,' and then after a few moments, 'What?' Turns out we had known each other in high school." — Gabrielle

Who: Lori, Snapchat director at NYLON, and Andrew, grad student; dating for a year and a half

"About a year and a half ago, I was leaving a wine tasting and wasn't ready to go home just yet, so I posted a tasteless Tinder Moment (RIP) of me in a cloud of vape smog. Never did I expect that to be the glimmer that caught the eye of my dream man. Within seconds, he messaged me a line about me looking like Scarlett Johansson, which was a stretch even for my vanity. He said, "I honestly can't tell if I recognize you from somewhere, or you just remind me of Scarlett Johansson." I immediately demanded his presence at a local bar. But it was the night before his birthday and he had two important presentations due the next day, so he politely asked to take a rain check, to which I responded with two umbrella emojis and 'nope.' He showed up the bar 15 minutes later, and we've been inseparable ever since." — Lori

Who: Ian, writer and editor, and David, a researcher at YouTube; dating for eleven months

"It all started on Instagram! I saw one of my friends had liked a video of his via the stalkery see-the-photos-your-followers-have-liked page. He was aesthetically pleasing to look at and at the time we were both working at record labels, so I had every reason to follow him and like all of his photos. A couple notifications later, he followed me back, and our blossoming like-for-like, comment-for-comment relationship began. One of the first comments I remember leaving was "Sleigh!" on a post of him buying Kelly Clarkson's holiday album, Wrapped in Red, when he was overseas studying in Prague. A few months of this goes on, and I eventually request him on Facebook (moving on up!). He accepts, obviously, and we begin to flirt via likes and comments on this social media platform as well. Many months go by, and he sends me a Facebook message saying that he's gonna be in the same city as me and wants to meet up. I said yes, again, obviously. At the time, I was in a relationship, but this was no big deal. I mean come on, I had to meet him at least once. We met at a bar and listened to shitty country music and tried to have a conversation amongst loud bargoers but got to know each other a little better. Put a face to the social media name, so to speak. It was fine. And then several months after that, I moved to New York, and we eventually started dating." —Chris

"We found each other through Instagram first, and that moved over to Facebook chat. It was a few months before I was leaving Sydney to travel the world for six months to photograph men for my book, Beau Book. L.A. was the first stop and Marcus asked me where I’d be staying and I let him know that I hadn't really planned any of that. He offered up his apartment and I took him up on that. He met me at the airport and I’ve been living with him ever since. I continued that Beau Book trip, went back to Sydney, sold all my things, and moved to L.A. We got married in November 2013. We knew we wanted to get married one day, but we jumped in quickly to keep me in the U.S. Three years later, we’re still going." — Luke