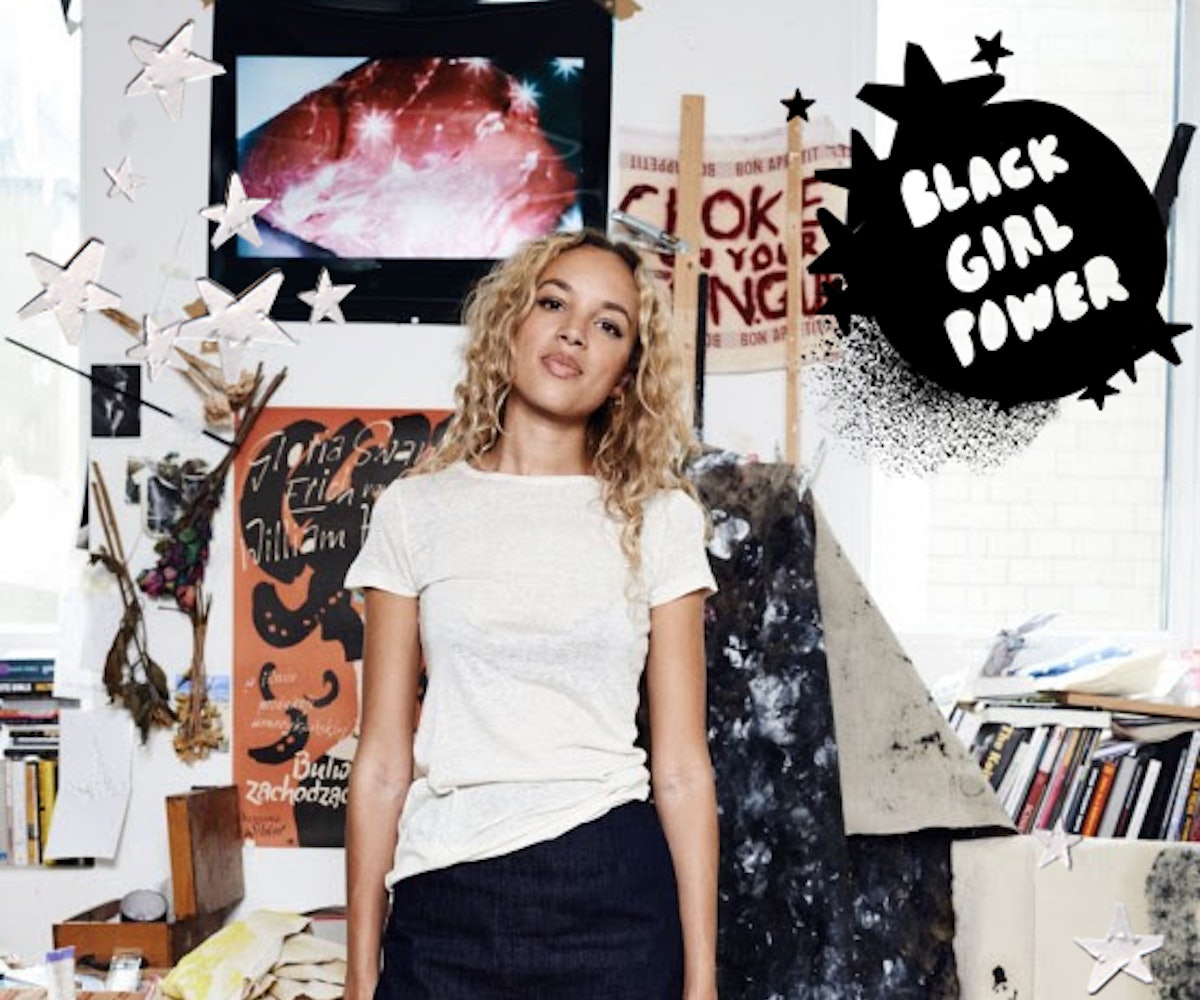 Phoebe Collings-James is an artist from London currently based in New York. Breaking out into the art world can be challenging enough as a woman, but the 28-year-old has been exposed to even more realities as the product of an English and Jamaican family. Collings-James' latest work at the CONDO exhibition consisted of a series of watercolour paintings of animals titled Just Enough Violence. (Her previous series was called Choke On Your Tongue.)

"My work relies on a hypersensitivity to the situations and people surrounding me. Perhaps that broadly describes many artists, but it is true. I think it’s about bearing witness," she told us in an email. "That gets scrambled with my research and desires to make physical things, to use my hands to turn materials from one form to another. I love art. I feel like I always forget to say that and it’s the most obvious answer really. I got into it because I love it. I find it inspiring because it can open up your imagination, which is something that is essential if we are to live and not merely survive."

Collings-James started modeling as a teenager and then got back into it a few years ago as a means to support her artistic practice. Her approach toward fashion and art has always been one of great ambivalence. "I think clothes are vitally important, even more so to people who are overlooked or marginalised in society," she added. "For many it is one of the few ways of expressing your creativity. To show the world who you are, what you are into, and what you believe in."

This reasoning is why Collings-James thinks that cultural appropriation has become a more divisive subject today. "Whether it’s designers appropriating ‘work wear’ or Kylie Jenner wearing her hair in cornrows, our style is something very precious," she explained.

Get more familiar with Collings-James and her work in the interview, below!

Firstly, there has to be a disclaimer that the art worlds I am talking about and have experienced are in the U.K., U.S.A. and a bit of western Europe, which is not the whole world or the whole art world despite us lazily thinking that it is. As an artist it's the most hot thing at the moment to be black or queer or female; the trendiness and commodification of those identities is dangerous and terrifying. So your otherness is suddenly simultaneously keeping you in the minority while also having a very high currency placed on it. I have found it helpful trying wherever possible to work with curators and galleries who are sensitive to that, which mostly means not working with galleries where there are all white males. It might seem extreme but it’s actually about self preservation. There is no way a gallery with an all cis, all white male team is going to be able to represent my work well.

Being the exception is really not a broken barrier, it is a smoke screen that gives a completely false sense of progress. I have been able to slip very easily with my "light skin" into situations where my dad, for example, as a black man, or even my sister who has darker skin than me, would not have experienced in the same way. As a model, I have often felt very conflicted as a reluctant acceptable face of blackness; I have been used as a token black woman purely because I am "not too dark."

Black and brown exceptionalism is so real now that the next huge barrier that will be broken will be when we are allowed to be mediocre. When we can just live. That is something I have really noticed in the art world, hundreds of cripplingly mediocre white male artists emerging each year, but for all those who do not fit into that you have to shine the brightest. You have to really prove yourself in a way that white men do not. I remember when I passed my A-levels with A grades and I was eligible for some sort of prize money as a black student who got exceptional grades. Often the seemingly defied odds are simply because as a non-white person less is expected of you. It seems crazy now.

I feel like I'm only just figuring that out to be honest. When I see younger women like Amandla Stenberg speak so eloquently and vehemently about their identities I'm so happy that they exist now. As I feel like I was looking for that kind of inspiration as a kid and didn't find it until much later. A lot of my relationships with my identity have been through the lens of relationships with men who, both black and white, have projected their own complicated relationships with race onto my body and mind. It's only in the last year I have started to feel more whole. As black people, we often are seen as just skin. Light skin, dark skin, golden skin—ooh that beautiful blue-black skin. We don't get to be whole. We don't get to be nuanced or chameleon-like.

I have been reading Grace Jones’ autobiography and she is giving me life each day. Coming from Jamaica like my father’s family, she describes her relationship with a world that would rather she stayed small, or fitted neatly in a box, and she continues at age 66 to smash all conventions. I especially like the way she describes each of the glossy photos that line the gutter of the book. "At the edge of the Caribbean Sea." "A one-man show. A red curtain, an accordion,a minimal staircase, one leg up. Voila - theatre!" "Acting natural in a 1970’s disco setting." "Using a New York rooftop as a stage, totally believing in myself." When people say gender and race are constructs, Grace knows that innately. She lives that performance of identities. She is my hero/ine!

I looked to the same places as everyone else! Magazines, TV, friends. It was very sad and disheartening how few black women were in the spaces I was interested in, but when I did find them I really held on tight. I found most of my inspiration in music: Aaliyah, Missy Elliot, Motown, and Destiny's Child were my whole world at that age and I wanted to copy everything about them. I also loved art and fashion before I knew that they were nemeses! Dressing up, making art, and making dance routines was standard. When I first started studying art I was 16 and I remember visiting the Louvre in Paris for the first time and being horrified, thinking

To me, Missy Elliot's music videos were art, the girls giving attitude posing in

were art, the fabrics of the fancy clothes I used to dream of when I walked down Bond Street in London were art, my anger and excitement at the world was also art. These rubbish old oil paintings of white men were not. It wasn’t until a teacher introduced me to the work of Shirin Neshat, Ghada Amer, Adrian Piper, and Sonia Boyce that I finally felt at home. I could sew or write or dance or swear and it could be art. That might sound very basic but it was a huge revelation to be exposed to those women speaking about their worlds in new ways. Adrian Piper’s "Funk Lessons" is still one of the richest expressions of what it means to be black, to appropriate, to express a physical vernacular, that I have ever seen in an art work. Her works that spoke about her light skin and the racism that she was privy to as a woman who could "pass" as white resonated deeply.